A story by David Rose of the British tabloid Daily Mail falsely alleged that researchers at the National Oceanic and Atmospheric Administration (NOAA) “manipulated global warming data” in order to “dupe” world leaders into agreeing to provisions of the 2015 Paris climate agreement. In reality, the NOAA report’s finding that there was no slowdown in the rate of global warming has since been independently verified by other experts, and it’s the Daily Mail story -- and the GOP politicians and right-wing media outlets like Breitbart News championing it -- that are  distorting climate science to score political points.

Daily Mail: Scientists “Manipulated” Data To Exaggerate Global Warming And Influence World Leaders Ahead Of UN Climate Conference. In an article headlined “Exposed: How world leaders were duped into investing billions over manipulated global warming data,” Daily Mail writer David Rose asserted that NOAA “rushed to publish a landmark paper that exaggerated global warming and was timed to influence the historic Paris Agreement on climate change.” Rose was referring to a June 2015 NOAA report published in the journal Science, which examined whether there was a slowdown, or “hiatus,” in the upward trend of global surface temperatures since 1998, as previous studies had suggested. The NOAA report found, “Warming has continued at a pace similar to that of the last half of the 20th century, and the slowdown was just an illusion.” As purported evidence of “manipulation” by the NOAA researchers, Rose cited an “exclusive interview” the Daily Mail conducted with former NOAA scientist John Bates, who accused the NOAA report’s lead author, Thomas Karl, of “insisting on decisions and scientific choices that maximised warming and minimised documentation… in an effort to discredit the notion of a global warming pause, rushed so that he could time publication to influence national and international deliberations on climate policy.” [The Daily Mail, 2/4/17; Science magazine, 6/25/15]

The fact that the new NOAA record is effectively identical with records constructed only from higher quality instruments (buoys, satellite radiometers, and Argo floats) strongly suggests that NOAA got it right and that we have been underestimating ocean warming in recent years.

John Kennedy, a researcher at the UK’s Met Office in charge of their ocean temperature product, agrees that NOAA’s new record is probably the most accurate in the last two decades, remarking: “At a global scale, those adjustments really do seem to work and the ERSSTv4 adjustments [NOAA’s new record] work best of all.”

Hausfather also provided a point-by-point rebuttal of the Daily Mail article, noting that “Rose’s claim that NOAA’s results ‘can never be verified’ is patently incorrect,” Rose’s criticism of NOAA for adjusting buoy data to match ship data is “a bit of a red herring,” and a graph included in Rose’s article is “deeply misleading” and makes a “spurious” comparison of data sets with different baselines -- as NASA climate scientist Gavin Schmidt also observed. 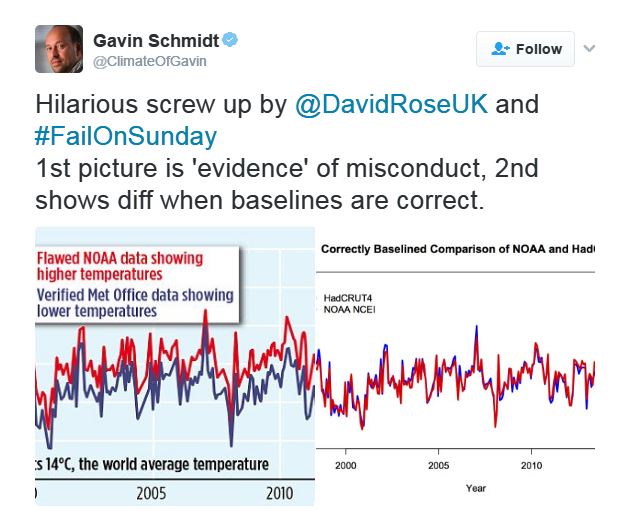 The “astonishing evidence” that David Rose purports to reveal in no way changes our understanding of modern warming or our best estimates of recent rates of warming. It does not in any way change the evidence that policymakers have at their disposal when deciding how to address the threats posed by climate change.

If anything, there is strong independent evidence that NOAA’s new record may be the most accurate one over the last two decades, at least for the two-thirds of the world covered in ocean. [Zeke Hausfather Tweet, 2/4/17; Carbon Brief, 2/5/17; Gavin Schmidt Tweet, 2/4/17]

Colleague Of NOAA Report’s Authors: Daily Mail Source “Was Not Involved In Any Aspect Of The Work.” In a post on the blog of the Irish Climate Analysis and Research Units, climate researcher Peter Thorn also rebutted the Daily Mail’s claims and noted that he had been involved in the build-up to the NOAA report, whereas the Daily Mail’s “whistle blower” had not been involved in any aspect of the report:

I worked for three and a bit years in the NOAA group responsible in the build-up to the Karl et al. paper (although I had left prior to that paper's preparation and publication). I have been involved in and am a co-author upon all relevant underlying papers to Karl et al., 2015.

The 'whistle blower' is John Bates who was not involved in any aspect of the work. NOAA's process is very stove-piped such that beyond seminars there is little dissemination of information across groups. John Bates never participated in any of the numerous technical meetings on the land or marine data I have participated in at NOAA NCEI either in person or remotely. This shows in his reputed (I am taking the journalist at their word that these are directly attributable quotes) mis-representation of the processes that actually occurred. [Irish Climate Analysis and Research Units blog, 2/5/17]

Current and Former NOAA And NASA Officials Issued Harsh Rebuttals To Daily Mail. Climate Nexus compiled reaction to Rose’s Daily Mail article from several past and present officials with NOAA and NASA, including:

Science Editor Jeremy Berg: “Any Suggestion That The Review Of This Paper Was ‘Rushed’ Is Baseless And Without Merit.” Climate Nexus also published reaction from Science editor Jeremy Berg, who rebutted Rose’s claim that the NOAA report was “rushed” to influence the United Nations climate conference in Paris:

With regard to the “rush” to publish, as of 2013, the median time from submission to online publication by Science was 109 days, or less than four months. The article by Karl et al. underwent handling and review for almost six months. Any suggestion that the review of this paper was “rushed” is baseless and without merit. Science stands behind its handling of this paper, which underwent particularly rigorous peer review. [Climate Nexus, accessed 2/6/17]

Daily Mail Story Echoed House Science Committee Chairman’s Baseless Attacks On NOAA, And It Came Just Days Before Committee Hearing On The EPA’s Use Of Science

Republican House Committee Chairman Requested NOAA Scientists' Internal Communications, Baselessly Claimed NOAA Inappropriately Altered Data. On October 13, 2015, Rep. Lamar Smith (R-TX), chairman of the House Committee on Science, Space, and Technology, issued a subpoena requesting internal communications related to the NOAA study. On October 28, the journal Nature reported that NOAA had refused to comply with the subpoena, arguing that the agency had already provided Smith's committee with the publicly available data behind the study, but that releasing scientists' internal communications would violate the “confidentiality” that is “essential to frank discourse among scientists.” In response, Smith baselessly accused NOAA of “alter[ing] the data to get the results they needed.” [Media Matters, 11/3/15]

House Science Committee Issued Press Release Promoting Daily Mail Allegations Of Misconduct. Ahead of a February 7 hearing that it will hold on the EPA’s use of scientific data, the House Science Committee issued a press release in which Smith praised Bates, the former NOAA official cited in the Daily Mail story, for “courageously stepping forward to tell the truth about NOAA’s senior officials playing fast and loose with the data in order to meet a politically predetermined conclusion.” [Committee on Science, Space, & Technology, 2/5/17; hearing schedule accessed 2/6/17]

Conservative Group Judicial Watch Also Filed Suit Against NOAA Seeking Communications Tied To Report. InsideClimate News reported that the conservative organization Judicial Watch “has sought to force the National Oceanic and Atmospheric Administration (NOAA) to release 8,000 pages of researchers' communications” about the June 2015 report. InsideClimate News added, “The anxiety of climate scientists because of the NOAA litigation has intensified since the start of the Trump administration. Charges against NOAA were revived this weekend in the Daily Mail, a British tabloid, and echoed by conservative media (followed by several refutations).” [InsideClimate News, 2/6/17]

Daily Mail’s David Rose Has Frequently Misrepresented Climate Science. As The Guardian’s John Abraham noted, David Rose, the author of the Daily Mail story, “has a history of denying the well-established science of climate change” and “making incorrect climate change statements.” Indeed, as recently as November, Rose engaged in egregious cherry-picking to assert that global average temperatures over land had experienced the “biggest and steepest fall on record.” And in 2013, Media Matters dubbed the Daily Mail the “climate change misinformer of the year,” in large part due to Rose’s distortions and outright falsehoods. [The Guardian, 2/5/17; Media Matters, 12/1/16; 12/30/13]