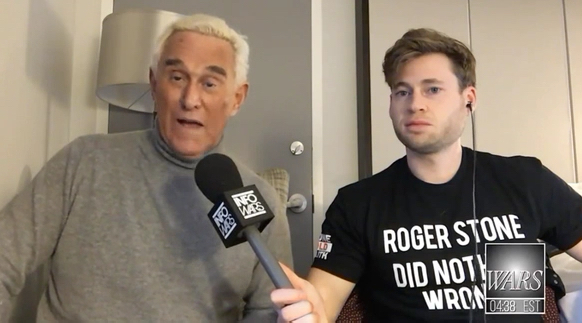 Trump confidant Roger Stone has a laughably innocuous explanation for the actions that led him to be charged with corruptly influencing comedian and radio host Randy Credico’s interactions with the House intelligence committee.

Prior to his arrest on January 25, Stone was under investigation over whether he had inside information about emails hacked by Russia and then released by WikiLeaks during the 2016 presidential election. Specifically, investigators on special counsel Robert Mueller’s team looked at whether Stone used Credico and conspiracy theorist Jerome Corsi (whom Stone is now feuding with) as intermediaries between himself and WikiLeaks.

Following his arrest, Stone was charged with seven crimes: five counts of making false statements to Congress about his interactions with WikiLeaks, one count of obstructing an official proceeding, and one count of witness tampering for attempting to corruptly persuade Credico, who is referred to throughout the indictment as “Person 2," to provide certain testimony before the House intelligence committee.

Stone attempted to explain away the witness tampering charge during an appearance on Alex Jones’ Infowars outlet. Stone, who also co-hosts Infowars program War Room, discussed the charge during the show’s January 28 broadcast.

In Stone’s telling, the repeated attempts documented in the indictment that show him urging Credico to assert his rights against self-incrimination or to lie under oath were merely suggestions to prevent Credico’s liberal friends from getting mad at him for supporting President Donald Trump:

ROGER STONE: There is a tremendous rush to judgment by attorneys who have never read my entire testimony and therefore can’t see the context of anything. To the extent, for example, Stone told Credico, a witness, to plead the fifth. Yes, when he said, “My left-wing friends, my progressive friends are going to go crazy when [they] find out that I helped you. They’re going to think we helped elect Trump. I don’t know what to do.” To which I said, “Well, you have the option of pleading the fifth.” I didn’t tell him to do it; I said it was possible.

Stone’s innocent retelling of his interactions with Credico is at odds with the indictment, and it belies reason that Stone was merely helping Credico avoid having his friends become upset with him. What seems more likely is that Stone was worried Credico would implicate him in a crime.

The indictment includes several instances of Stone urging Credico to assert his right against self-incrimination. According to the indictment, Stone told Credico, “Stonewall it. Plead the fifth. Anything to save the plan,” apparently referencing a statement made by President Richard Nixon while attempting to hinder the Watergate investigation. Stone also repeatedly told Credico to be like Frank Pentangeli, a character in The Godfather: Part II. In the film, Pentangeli, a mobster in the Corleone crime family, lies to a congressional committee about protagonist Michael Corleone's role as the head of that organization, covering up Corleone's own perjury before that committee. (An imprisoned Pentangeli later commits suicide after being assured the Corleones will take care of his family.)

The indictment shows that Stone later became angry with Credico for repeatedly balking at his advice and exhorting Stone to testify truthfully. Stone called Credico a “rat” and a “stoolie,” threatened to take away his therapy dog, and told him, “Let’s get it on. Prepare to die [expletive].” (In May, Stone explained his “prepare to die” comment to Mother Jones by saying, “He told me he had terminal prostate cancer.”)