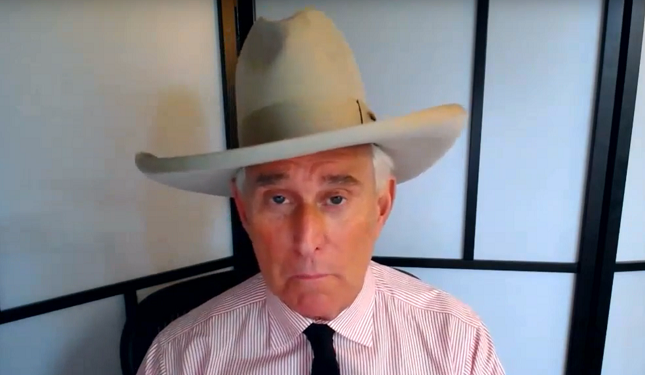 Stone is a vicious racist, misogynist, liar, and conspiracy theorist who describes himself as “a 40-year friend and advisor of Donald Trump.” He worked as a paid consultant to Trump’s campaign for part of 2015 and has since advised him in an unofficial capacity.

He was banned from CNN, MSNBC, and even Fox News in 2016 because of his vitriolic rhetoric. However, all three networks have since welcomed him back as a guest. Stone also writes commentaries online and works for conspiracy theorist Alex Jones’ Infowars network.

Nothing Stone says should be taken at face value. Even staunch right-wingers don’t trust Stone, calling him “a sleazeball” (Fox News host Mark Levin); “a little rat” (pro-Trump super PAC head Ed Rollins); and “one of the worst people in the world” (radio host Glenn Beck).

Stone’s career as a dirty trickster has come back to haunt him in the form of Mueller’s investigation.

Sources told CNBC that Stone “is apparently one of the top subjects of the Mueller investigation into potential collusion between the Kremlin and the Trump campaign.” ABC News recently reported that “at least seven people associated with” Stone have been contacted by “Mueller, according to interviews with witnesses and others who say they've been contacted.” Stone was also likely one of the unnamed people whose activities were mentioned in Mueller’s July 13 indictment of 12 Russian intelligence officers for election interference.

As he has on so many other topics, Stone has lied and contradicted himself regarding numerous matters related to Mueller’s Russia investigation. For instance:

Stone had contacts with Russians during the 2016 campaign. As Stone acknowledged, he met with “Henry Greenberg,” a Russian national who claimed to have damaging information about Democratic presidential candidate Hillary Clinton, in May 2016. Stone also communicated online with Guccifer 2.0, “the digital persona alleged to have been set up by Russian military intelligence,” as The New York Times wrote.

Stone told ABC News that he only publicly disclosed the meeting with Greenberg last month because he “just didn't remember. 2016 was a pretty busy year.” He also claimed that the Greenberg meeting was “a failed Obama FBI sting operation” and has denied that Guccifer 2.0 is Russian.

Stone repeatedly claimed he didn’t have any contact with Russians. Here are 10 examples of his claims:

Stone contradicted himself on whether he “communicated with Assange”

Media Matters first documented that Stone said during the 2016 campaign that he “communicated with [Julian] Assange.” He said on August 8, 2016, regarding what an “October surprise” in the election could be: “Well, it could be any number of things. I actually have communicated with Assange. I believe the next tranche of his documents pertain to the Clinton Foundation but there's no telling what the October surprise may be.”

On August 12, he repeated that he “was in communication with Julian Assange.”

Stone has repeatedly contradicted himself about Assange, now claiming he “never communicated with Assange.” Here are just a few examples of his contradictory statements:

Stone claimed “he had communicated with WikiLeaks via an ‘intermediary,’” but private messages show they “communicated directly”

The Atlantic reported on February 27 that Stone has contradicted himself on whether he communicated directly with WikiLeaks. Reporter Natasha Bertrand wrote:

On March 17, 2017, WikiLeaks tweeted that it had never communicated with Roger Stone, a longtime confidante and informal adviser to President Donald Trump. In his interview with the House Intelligence Committee last September, Stone, who testified under oath, told lawmakers that he had communicated with WikiLeaks via an “intermediary,” whom he identified only as a “journalist.” He declined to reveal that person’s identity to the committee, he told reporters later.

Private Twitter messages obtained by The Atlantic show that Stone and WikiLeaks, a radical-transparency group, communicated directly on October 13, 2016—and that WikiLeaks sought to keep its channel to Stone open after Trump won the election. The existence of the secret correspondence marks yet another strange twist in the White House’s rapidly swelling Russia scandal. Stone and Trump have been friends for decades, which raises key questions about what the president knew about Stone’s interactions with Wikileaks during the campaign. The White House did not immediately respond to a request for comment. [The Atlantic, 2/27/18]

Stone has claimed, both before and after The Atlantic piece was published, that he “never” communicated with WikiLeaks.

He told CNN's Andrew Kaczynski on March 27, 2017: “Since I never communicated with WikiLeaks, I guess I must be innocent of charges I knew about the hacking of Podesta's email (speculation and conjecture) and the timing or scope of their subsequent disclosures. So I am clairvoyant or just a good guesser because the limited things I did predict (Oct disclosures) all came true.”

In late May, Stone responded to a Wall Street Journal story by telling Politico: “The emails referenced [in that story] fell outside the precisely worded scope of the House Intelligence Committee request -- I had no obligation to turn them over and the content of them merely confirms my claim that I was utilizing a back channel and never communicated directly with WikiLeaks or Assange.”

Reacting to the July 13 federal indictment of 12 Russian intelligence officials, Stone’s initial instinct was to claim that he couldn’t be one of the unnamed people referenced in Mueller’s indictment because he “wasn’t in regular contact with members of the Trump campaign.”

Stone told CNN by phone, “I don't think it is me because I wasn't in regular contact with members of the Trump campaign,” although he was in contact with Donald Trump himself.

Referring to remarks from Deputy Attorney General Rod Rosenstein on Friday, Stone said, “Look, Rosenstein said in his comments that they knew of no crime by US citizens. They included my exchange with Guccifer which is now public, in the indictment. And it’s benign. So I don’t know that it refers to me.”

He added, “Based on timing, content and context, they're benign. They certainly don't provide any evidence of collaboration or collusion.”

Stone went on to closely parse the language of the indictment, arguing, “My contact with the campaign in 2016 was Donald Trump. I was not in regular contact with campaign officials.”

Stone later told CNN’s Chris Cuomo “that he ‘misunderstood the reference.’ ‘I never denied that it was me, I just didn't understand the earlier reference.’”

Regardless of whether he’s mentioned in the indictment, Stone is contradicting himself about his contact with the Trump campaign in 2016.

For instance, on a July 10, 2016, appearance on a radio program, Stone said: “I spoke yesterday to Donald Trump’s campaign manager, Paul Manafort, an incredibly able fellow, an old friend of mine, former business partner of mine, in fact.” He appeared on a radio program on August 17, 2016, and said he “spoke to” Manafort about the hiring of former Breitbart.com head Steve Bannon.

Stone also said he communicated with Trump campaign communications official Michael Caputo during the campaign, who helped arrange a meeting with Russian national “Henry Greenberg” in 2016.

In June, Mueller subpoenaed Stone associate Andrew Miller regarding the Russia investigation. Stone criticized the subpoena by claiming that Miller “has not worked for me for three years” and “did not work for me during the 2016 campaign, although he did fly in for the Republican National Convention to work on my scheduling."

Stone also said during a June 28 appearance on Fox News’ The Ingraham Angle: “Andrew Miller, who hasn't worked for me since 2013, three years ago, did come and help me at the Republican National Convention for a week. … But if he didn't work for me other than at the convention, it reinforces my view that this is some kind of effort to frame me for some extraneous offense to silence me, or to get me to testify against the president.” He added: “When he worked for me, and it was three years ago, he did scheduling. He traveled with me as a wing man. He did some I.T. work. But, again, he remains a good friend of mine.”

Stone’s response is a lie.

In 2016 and 2017, Miller’s contact information was on press releases for Stone. On January 31, 2017, Miller appeared on a podcast and said he was “on Stone’s insurance plan.” When the host Tim Preuss asked if he’s still Stone’s “employee technically,” Miller replied: “Yeah, technically, I guess.”

Stone’s political organization, Committee To Restore America's Greatness, paid $9,000 to Miller’s research firm over three months (May, June, and August) in 2016 for “expense reimbursement” and “consulting,” according to Federal Election Commission records.

Another Stone group, Stop The Steal, also paid Miller’s firm $5,000 in “consulting fees” on October 13, 2016 -- months after the July Republican National Convention -- according to IRS records.

“Stone has contradicted himself” on his “legal defense fund”

In recent months, Stone has been attempting to raise money for his “legal defense fund.” But CNBC reported on May 2 that “Stone has contradicted himself on what he's paying for and how much he's projected to pay” in legal costs.

A website for Stone’s fund claims that it’s “becoming clear that Special Counsel Robert Mueller intends to frame Roger Stone for some bogus ‘offense’ unrelated to Russian collusion, Wikileaks, or perhaps even the 2016 election.” A notice on the page states: “Contributions are not deductible for federal income tax purposes. Under the Internal Revenue Code, all contributions to the Roger Stone Legal Defense Fund are considered gifts to Roger Stone.”