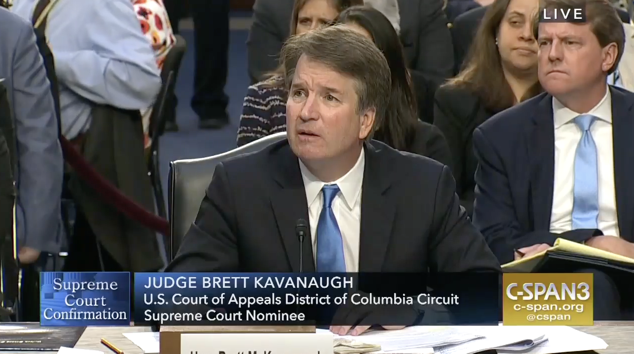 A Reuters recap of the second day of hearings for President Donald Trump’s Supreme Court nominee Brett Kavanaugh failed to include one of the only illuminating and unscripted moments of the day.

During questioning, Sen. Patrick Leahy (D-VT) challenged Kavanaugh over whether Kavanaugh had knowledge that documents he received regarding judicial nominations while working in the White House counsel’s office during the Bush administration had been stolen by a GOP operative from Leahy’s office and from other Democrats in Congress. A rattled Kavanaugh denied knowing the information he received was stolen in one of the only newsy exchanges of the day.

A recap video released by Reuters on Twitter, however, missed that moment, but did include Kavanaugh’s rehearsed responses on hot button issues like Roe v. Wade, the nominee offering platitudes about judicial independence, as well as a lighthearted moment where Sen. Dianne Feinstein (D-CA) reminded Kavanaugh he would want to be remembered as a good husband:

See the critical moments from the second day of Brett Kavanaugh's confirmation hearing as the Supreme Court nominee talks independence and abortion https://t.co/OSBSCNC9K9 via @ReutersTV pic.twitter.com/WlJmVe5unh

Talking Points Memo’s Tierney Sneed wrote that the exchange with Leahy “threw Brett Kavanaugh off his flow of so far providing steady and confident answers to senators’ questions.” Dan Spinelli at Mother Jones called the exchange a “rare unscripted reaction from Brett Kavanaugh.”

Beyond the specific issue of whether Kavanaugh knew intelligence he used to help prepare Bush judicial nominees for hearings was ill-gotten, Leahy’s exchange also highlighted the issue that many records related to Kavanaugh’s work in the Bush administration are being hidden from the public. According to Leahy, he was limited in his questioning of Kavanaugh over the stolen documents because emails relating to the documents have been marked “committee confidential” by the Republican majority of the Senate Judiciary Committee.

The ringleader worked closely with #Kavanaugh in pushing these controversial nominees. Kavanaugh testified he had no reason to suspect anything “untoward.” Today I began confronting him with the many reasons why he would have known there was something deeply wrong here.

Before any mention of it was public, the ringleader also sent #Kavanaugh a DRAFT letter of mine and other Dems. He worked extensively on nominations in the WH at the time, and would’ve known he had a private letter that hadn’t yet been reported in the press. pic.twitter.com/qVeDyeO5Dm

These are the only documents that Chairman Grassley allowed to make public to date. There are more that are being hidden and that shed light on #Kavanaugh’s role in this scandal. They must be made public so you, and the Senate, can judge for ourselves. #WhatAreTheyHiding