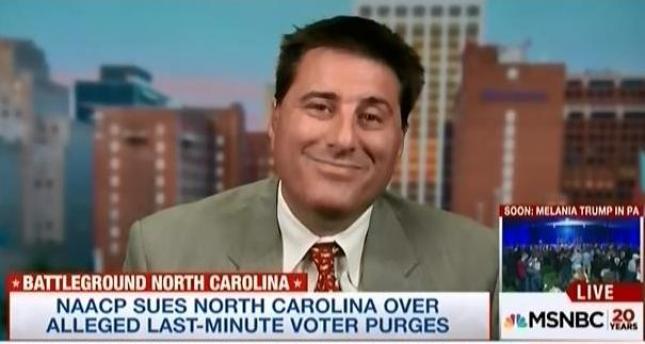 A report by Reuters exposed a systematic attempt to limit early voting in North Carolina, which has been shown to disenfranchise minority voters and continue what appears to be a coordinated effort to suppress some Americans’ right to vote. Yet right-wing media ignore this reality as they focus on making unfounded claims of rampant voter fraud.

Dallas Woodhouse, the North Carolina Republican Party executive director, sent emails urging “Republicans serving on county election boards to follow the ‘party line’ on curtailing the early voting period.” While local newspapers reported on the Woodhouse emails in August, the Reuters report shows his comments were not an isolated example but rather part of a pattern of “lobbying to limit voting hours.”

For example, emails from Garry Terry, the chairman of the Republican Party for North Carolina’s First Congressional District, emphasized the partisan motivations for early voting restrictions, encouraging election board members “to act ‘in the best interest of the Republican Party’ by opposing Sunday voting and restricting early voting,” which are historically periods of increased minority turnout, Reuters reported. Elaine Hewitt, a member of the Rowan County Republican Executive Committee, sent early voting proposals that “included just one site for the first four days and no sites on Sundays,” claiming that “with all of the opportunities to vote … there is no justification for requiring election workers to work on Sundays.” Reuters noted that “state and county Republican officials lobbied members of at least 17 county election boards” to restrict early voting and Sunday voting opportunities.

The focus on limiting early voting and Sunday voting represents the newest effort to disenfranchise minorities in North Carolina. As media outlets have noted, “This isn’t the first time that the North Carolina Republican Party has been criticized for voter suppression this election year.” The U.S. Court of Appeals for the 4th Circuit reaffirmed the racial dimension of these attacks on voting rights when it struck down the North Carolina voter ID law, referred to as a “monster” law, because it “agreed with allegations that North Carolina’s omnibus bill selectively chose voter-ID requirements, reduced the number of early-voting days and changed registration procedures in ways meant to harm blacks.”

While the evidence showing active efforts at voter suppression continues to pile up, right-wing media are focusing on propagating claims of voter fraud. Right-wing media figures continue to fearmonger about dead voters, in-person voter fraud, and inaccurate voter rolls, even though expert after expert has thoroughly debunked each and every voter fraud myth. The focus on promoting fears about voter fraud helps provide the rhetorical ammunition to legitimize the continuing war on voting rights.