After Facebook announced it would remove all groups and pages affiliated with the QAnon conspiracy theory, previously classified by the FBI as a domestic terrorist threat, e-commerce site Etsy seemingly followed suit and finally committed to removing all merchandise related to it. However, in both cases, the platforms must ensure they follow through on their commitment to enforce their policies. Already it appears Etsy is failing in this department: Although Business Insider reported that Etsy’s QAnon content “appears to already be absent from or unsearchable on the website” today, Media Matters has found numerous instances of QAnon content still for sale on the platform.

As of this morning, Etsy’s algorithm was still recommending QAnon merchandise, and basic searches of “QAnon” or “WWG1WGA” (the abbreviation of QAnon slogan “where we go one we go all”) bring up QAnon merchandise results that are still available on the site.

Prior to Etsy’s confirmation, the platform — a major source for QAnon followers to monetize the conspiracy theory — was already removing QAnon content. Media Matters' internal research identified a QAnon Facebook group (still active despite Facebook’s supposed crackdown) discussed QAnon-affiliated merchandise being removed from the site. But like Facebook, Etsy needs to go further to truly fulfill its commitment. 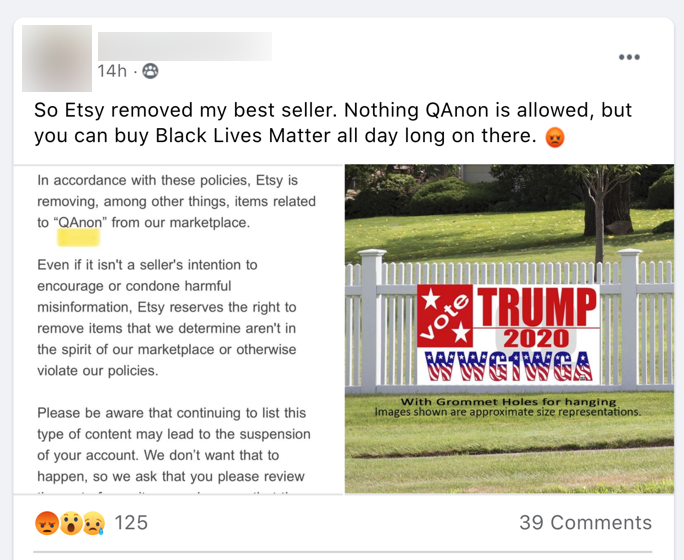 The site must also commit to banning multiple-offense users from its site because, as activity on other platforms proves, QAnon followers are adamant about trying to evade newly implemented restrictions and will continue to circumvent them.