In a piece about disgraced late U.S. Sen. Joseph McCarthy (R-WI), Politico senior staff writer Michael Kruse made a since-removed anti-gay remark about McCarthy-ally Roy Cohn, saying that Cohn’s death from AIDS was “the result of the decadent homosexual lifestyle he denied to the end.” The piece has since been edited to remove that language, saying it was “deemed insensitive.”

Kruse wrote his report in response to a August 19 tweet by President Donald Trump, which read, in part, “Study the late Joseph McCarthy.” The piece detailed the rise and fall of McCarthy, who “earned lasting disgrace for his public shaming of supposed Communists,” as well as the impact his adviser Cohn had on the senator. The report also noted that Cohn represented “Trump and his father when the Department of Justice sued them in 1973 for racial bias in the rentals of their outer-borough apartments.” Remarking on Cohn’s death, however, Kruse included an unnecessary and homophobic comment, writing, “He died from AIDS, the result of the decadent homosexual lifestyle he denied to the end”: 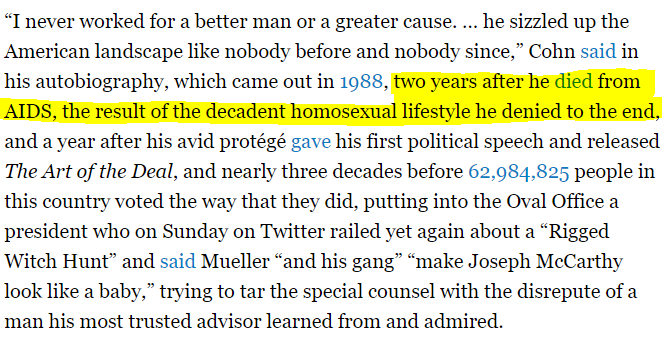 The piece has since been edited to read that Cohn “died from AIDS as a man who denied to the end that he was gay,” and an editor's note has been added indicating that “an earlier version of this story contained language about Roy Cohn that was deemed insensitive and has been removed.” Initially after receiving criticism on Twitter, Kruse did not apologize but said that he “should have thought harder about these echoes and connotations” and suggested that “a simple ‘promiscuity’ probably would’ve sufficed.” But suggesting that HIV/AIDS is a consequence of being gay, or even promiscuous, is disparaging and damaging to the LGBTQ community. For years, extreme anti-LGBTQ groups like Alliance Defending Freedom and Liberty Counsel have employed similar messaging, and the Public Religion Research Institute found that in 2013, “14 percent of Americans believed AIDS might be punishment from God” for “immoral sexual behavior.”

In fact, much of the Reagan administration’s chilling lack of response to the HIV/AIDS epidemic can be attributed to its designation as a “gay plague,” something senior Reagan staff and members of the media laughed about in 1982 after “nearly 1,000 people had died from AIDS,” according to Vox’s German Lopez. The Washington Post’s Caitlin Gibson noted similar responses in subsequent years:

At subsequent press conferences in 1983 and 1984, [Reagan administration press secretary Larry] Speakes — and the White House press corps — continue to respond to [reporter Lester] Kinsolving’s increasingly urgent questions about AIDS with a mix of laughter, homophobic jokes and general indifference.

Gibson wrote that the first time Reagan “addressed the epidemic in earnest” was in 1987, after “nearly 23,000 people had died of the disease,” and even as his administration began to confront the crisis, he continued to suggest “that its spread might be slowed by ethical behavior.”

The LGBTQ community, and in particular queer and trans black communities, are disproportionately impacted by HIV, which is treatable and preventable (though many barriers remain to access and patient retention). To glibly suggest that a man’s death from AIDS in 1986 was his fault, or the result of a “decadent homosexual lifestyle,” is to demean the lost lives of hundreds of thousands of LGBTQ people. And as we saw in the Reagan administration’s response to the epidemic, that sentiment quite literally killed people. Comments such as Kruse’s necessitate more than just an edit; they demand an apology.

Click here to find free HIV testing near you.