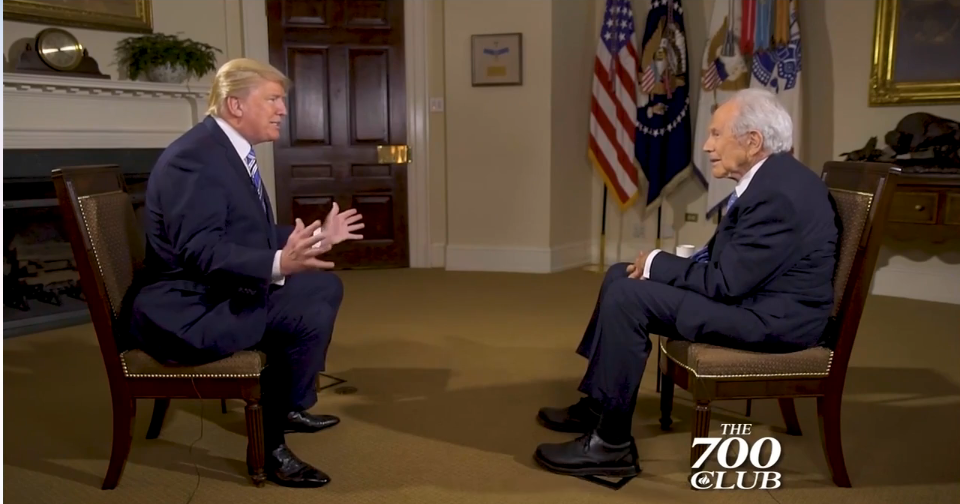 President Donald Trump broke his streak of granting interviews exclusively to his friends at Fox to delve into an even safer space: talking about windmills with an octogenarian who hangs on his every word.

This morning, the president’s interview with kooky bigot Pat Robertson aired on the Christian Broadcasting Network (CBN)'s The 700 Club.

Trump’s sit-down with Robertson is the first televised interview he’s granted to an outlet other than Fox News in two months. (He also gave an interview to Reuters’ Steve Holland on the same day.) With this interview, Trump has now granted more on-camera interviews to the Christian Broadcasting Network (two) than he has to any other network besides Fox (11) since his inauguration.

It’s telling that the president would turn to Robertson for a friendly media face as his administration continues to stifle press access in unprecedented ways -- he thinks critics of Trump are defying “God’s plan for America.” Robertson is also a deeply anti-LGBTQ figure on the evangelical right who has blamed feminists and the ACLU for 9/11 and thinks the Hurricane Katrina devastation was “connected” to abortion.

Trump talked to Robertson because he knew the unabashed Trump fan wouldn't press him on any of the many scandals engulfing his administration, and Robertson didn't disappoint. Here are the highlights, speaking for themselves.

Here’s Robertson opening the interview by telling Trump he’s “so proud of everything you’re doing”:

Here is Trump showing off to Robertson that he knows how to pronounce Qatar:

Here is Trump explaining to Robertson that the G20 Summit was a success because there were 20 countries represented there, and he got along well with everyone:

Here is a hard-hitting exchange about Trump’s “good” and “not bad” meeting with Putin:

Here is Trump sneaking in a little reference to windmills, one of his very favorite topics:

Here’s Trump and Robertson talking about “thousands” of regulations Trump has purportedly lifted:

Here’s the very in-depth answer Robertson got when he asked about the potential failure of the Republican health care bill:

This one is just fun:

And here’s Robertson predicting Trump will be re-elected and telling him that the “evangelicals of America” are praying for him:

There is no video of Trump talking about the ongoing investigations into his presidential campaign’s possible collusion with Russia, because it just never came up!

The interview ended with Trump explaining, to Robertson’s visible delight, that he gave an interview to the host because he’s “treated very unfairly by the press” but Robertson has “people that I love.” “You will be saying ‘Merry Christmas’ again very soon,” Trump assured him.

Robertson then spent more time reflecting on his delightful time with the president and his staff and praising Trump’s “vision.” The televangelist also congratulated himself on not asking the president about any Russia “garbage.” Good job, Pat.