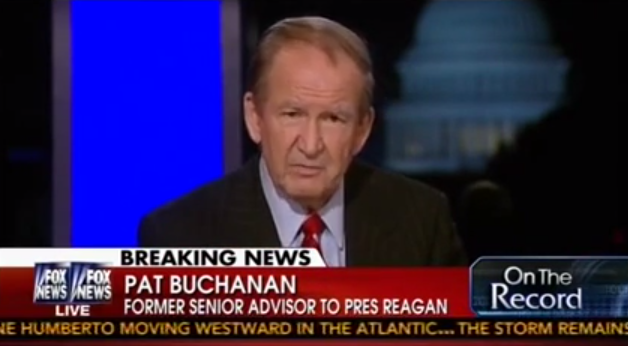 Pat Buchanan praised Russian President Vladimir Putin for his defense of “traditional values,” citing his opposition to such “evil” developments as marriage equality to position Putin as the global leader of the fight “against the militant secularism of a multicultural and transnational elite.”

In his December 17 syndicated column, Buchanan pondered whether Putin is a fellow “paleoconservative” before checking off a list of Putin's culturally conservative stances, which seemed to suggest a clear answer to Buchanan (emphasis added):

Is Vladimir Putin a paleoconservative?

In the culture war for mankind's future, is he one of us?

While such a question may be blasphemous in Western circles, consider the content of the Russian president's state of the nation address.

With America clearly in mind, Putin declared, “In many countries today, moral and ethical norms are being reconsidered.”

Translation: While privacy and freedom of thought, religion and speech are cherished rights, to equate traditional marriage and same-sex marriage is to equate good with evil.

And same-sex marriage is indeed an “abstract” idea unrooted in the history or tradition of the West. Where did it come from?

Peoples all over the world, claims Putin, are supporting Russia's “defense of traditional values” against a “so-called tolerance” that is “genderless and infertile.”

Suggesting that with its increased acceptance of LGBT equality “Barack Obama's America” has taken the place of the Soviet Union as “the focus of evil in the modern world,” Buchanan argued that Putin's Russia is a better example to the international community.  He applauded a recent India Supreme Court ruling reinstating that country's ban on gay sex, seeing it as a sign that Putin's vision may yet prevail (emphasis added):

President Reagan once called the old Soviet Empire “the focus of evil in the modern world.” President Putin is implying that Barack Obama's America may deserve the title in the 21st century.

While his stance as a defender of traditional values has drawn the mockery of Western media and cultural elites, Putin is not wrong in saying that he can speak for much of mankind.

Same-sex marriage is supported by America's young, but most states still resist it, with black pastors visible in the vanguard of the counterrevolution. In France, a million people took to the streets of Paris to denounce the Socialists' imposition of homosexual marriage.

Only 15 nations out of more than 190 have recognized it.

In India, the world's largest democracy, the Supreme Court has struck down a lower court ruling that made same-sex marriage a right. And the parliament in this socially conservative nation of more than a billion people is unlikely soon to reverse the high court.

In the four dozen nations that are predominantly Muslim, which make up a fourth of the U.N. General Assembly and a fifth of mankind, same-sex marriage is not even on the table. And Pope Francis has reaffirmed Catholic doctrine on the issue for over a billion Catholics.

It's true, as Buchanan notes, that Pope Francis hasn't changed Roman Catholic doctrine against same-sex marriage. Still, Buchanan's apparent praise for the pope is odd, given that just one month ago he denounced the pontiff for saying he wouldn't “judge” gay people.

Buchanan's warm words for Putin echo a column he wrote in August shortly after Putin signed laws banning so-called “gay 'propaganda'” and prohibiting the adoption of Russian children by parents from pro-equality countries. At the time, Buchanan commended Putin's efforts to “re-establish” his nation's “moral compass.” Now, as Putin further hardens his anti-gay stance, Buchanan has promoted Putin to the role of cultural conservatism's savior.