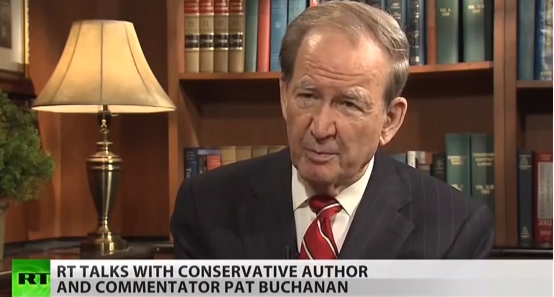 In his latest paean to Vladimir Putin, Pat Buchanan lauded the Russian president for “planting Russia's flag firmly on the side of traditional Christianity” with his policies against reproductive choice and LGBT rights - evidence, Buchanan suggested, that God is on Putin's side in his showdown with the West.

In his April 4 syndicated column, Buchanan heralded Putin as the global leader of a backlash against “a hedonistic secular and social revolution coming out of the West”:

In the new war of beliefs, Putin is saying, it is Russia that is on God's side. The West is Gomorrah.

He is also tapping into the worldwide revulsion of and resistance to the sewage of a hedonistic secular and social revolution coming out of the West.

But the war to be waged with the West is not with rockets. It is a cultural, social, moral war where Russia's role, in Putin's words, is to “prevent movement backward and downward, into chaotic darkness and a return to a primitive state.”

In the new ideological Cold War, whose side is God on now?

Since the Russian parliament passed a draconian law outlawing so-called gay “propaganda” - which effectively bans pro-LGBT speech and even public displays of affection between same-sex couples - Buchanan has emerged as one of Putin's most prominent American champions. In August, the columnist applauded Putin for “trying to re-establish” his country's “moral compass.” In December, Buchanan proclaimed Putin the worldwide leader of social conservatism, declaring that the president's contempt for LGBT rights shows he's “one of us.”

Most recently, Buchanan has taken Putin's side in the global standoff over Russia's invasion and annexation of Crimea. Buchanan's affinity for the revanchist Russian leader is far from surprising, given that Buchanan traces America's decline to when the country began to believe "[t]hat women and men are equal" and "[t]hat all races, religions and ethnic groups are equal." In Putin, it seems, Buchanan has finally met his ideological soul mate.