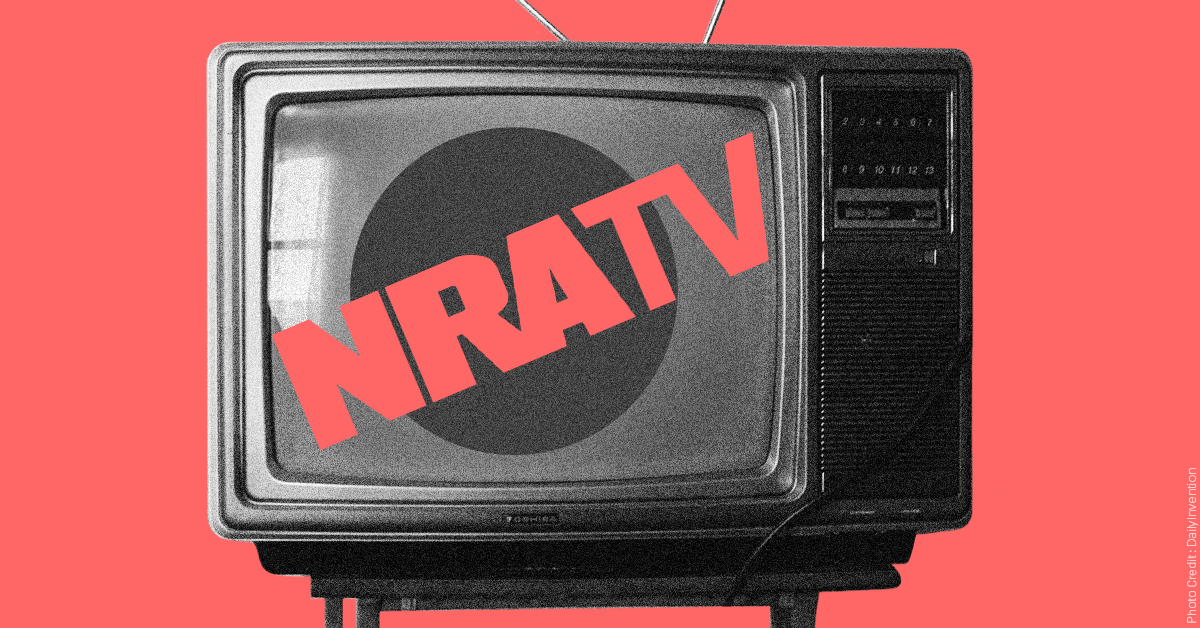 A public feud between the National Rifle Association and its longtime ad firm Ackerman McQueen is escalating, creating a bizarre dynamic in which the ad firm continues its role producing the NRA’s media outlet even as it wages a scorched-earth campaign against the group’s leadership. Supporters of the Ackerman faction are now leaking embarrassing information about NRA CEO and Executive Vice President Wayne LaPierre that could threaten his job as well as the NRA’s tax-exempt nonprofit status. Yet NRATV continues to put forward a facade of normalcy.

The first public sign of trouble between the NRA and Ackerman -- which have worked together for nearly four decades -- was revealed in a March 11 article in The New York Times. Noting that NRATV “has adopted an increasingly apocalyptic, hard-right tone, warning of race wars, describing Barack Obama as a ‘fresh-faced flower-child president,’ calling for a march on the Federal Bureau of Investigation and comparing journalists to rodents,” the Times quoted NRA board members, including past NRA President Marion Hammer, expressing concern about NRATV’s direction. The Times reported that LaPierre was “livid and embarrassed” after NRA national spokesperson and Ackerman employee Dana Loesch aired an episode of her NRATV show -- first reported on by Media Matters -- that depicted Thomas the Tank Engine in a Ku Klux Klan hood in an attempt to criticize the children’s television show Thomas and Friends for adding diversity to its cast of characters.

Then in April, the NRA sued Ackerman in Virginia state court, alleging that the ad firm has not fulfilled its contractual obligations to the NRA. The NRA’s complaint mentioned that it paid Ackerman $42.6 million in 2017 alone and alleged that Ackerman refused to turn over metrics that could be used to evaluate NRATV’s effectiveness and that it would not provide full details about a contract with then-NRA President Oliver North to produce an NRATV series. (The NRA would later update its legal complaint to accuse North of duplicitously attempting to draw a salary from both the NRA and Ackerman.)

The conflict between the NRA and its own advertising firm came to a head during the 2019 NRA annual meeting, when a series of events pitted LaPierre and Brewer Attorneys & Counselors -- an outside legal contractor that allegedly costs the NRA nearly $100,000 per day -- against North and Ackerman McQueen. (Another strange aspect to the infighting: William Brewer, the CEO of Brewer Attorneys, is the brother-in-law of Ackerman McQueen CEO Revan McQueen.) As the meetings were unfolding, North sent the NRA board a letter alleging LaPierre participated in various financial misdeeds. LaPierre responded by accusing North of attempting to extort him and said he would not resign. In the end, LaPierre was reelected by the board of the directors, while North was ousted from the presidency after acknowledging he did not have the support of the board.

That outcome appears to have done little to stem the infighting. In one recent major development, on May 10, the letter that North sent to the board leaked and its embarrassing claims about LaPierre’s spending became public. In recent years, LaPierre often used Ackerman to pay for things that the NRA would later reimburse. Among the expenses: more than $274,000 in clothing purchases from a single Beverly Hills, CA, clothing boutique, including as much as $39,000 spent in a single day, and an additional $267,000-plus for travel and rent, including $18,300 for a car and driver during a trip in Europe and $13,800 to rent an apartment for a summer intern. The letter also highlighted legal fees charged by Brewer that North said were exorbitant.

NRATV has continued its regular broadcasts during this infighting, with no mention of any of these new developments. Ackerman has produced the NRA’s media operation since 2004, when the outlet was originally called NRA News. In 2016, NRA News changed its name to NRATV and massively expanded to become a 24/7 online broadcast. NRATV has three shows that broadcast live on weekdays; the rest of the airtime is filled with rebroadcasts, prerecorded series, and other videos from the massive NRATV archive.

NRATV’s news-of-the-day show Stinchfield has continued its focus on the 2020 Democratic presidential primary, which the NRA terms the ”disarmament primary.” A snapshot of “disarmament primary” segments broadcast on May 15 and 16 shows the type of unhinged and apocalyptic claims that host Grant Stinchfield routinely makes about Democratic candidates:

Stinchfield has also continued its regular attacks on the press. On May 16, Stinchfield ran three different segments on a local news story about preventing home burglaries. The reporter who wrote the story interviewed convicted burglars about what makes them more or less likely to target a home. According to the report, “That National Rifle Association (NRA) sticker on the door that once deterred burglars is now often viewed as a clue that valuable guns are in the home for the taking.” Stinchfield was apoplectic, apparently not grasping that the reporter wasn’t endorsing the interviewees’ views but was simply sharing what he was told. According to Stinchfield:

The bottom line is this: The reporter’s apparent bias toward guns and the NRA got in the way of telling a meaningful story with some good tips. His credibility is shot now, to me, and sadly, most people will miss that little shot across the bow that he fires at the NRA in this piece. But this is what we’re up against: a mainstream media waging an information war against us. “How dare you be an NRA member,” they say. “How dare you show it proudly. If you do, you’ll be burglarized.” Give me a break.

The theory that an NRA sticker could increase the odds of a burglary has come up in other recent local news investigations, and it has even been discussed in pro-gun media without allegations of a mainstream media conspiracy.

NRATV’s two other live shows, Relentless, hosted by Dana Loesch, and Cam & Co., hosted by Cam Edwards, were unremarkable on May 15 and 16 , featuring criticism of Democratic presidential candidates and discussion of gun issues. In one segment characteristic of Loesch’s tendency to sometimes veer into bizarre commentary, Loesch cautioned NRATV viewers to make sure not to leave guns behind in public bathrooms or else “the disarmament left” could “use an accident in an attempt to get rid of your Second Amendment rights.”

Dana Loesch reminds NRATV viewers not to leave their guns behind in public bathrooms so “the disarmament left” can't use incidents to “get rid of your Second Amendment rights.” pic.twitter.com/Rdf7Bdj5jY

Despite his ouster as NRA president, North remains a prominent face at NRATV.com. That appears to be because he still works for Ackerman; his NRATV bio page currently describes him as “Past NRA President, Host.” (North also appears to continue to serve on the NRA board of directors. He was reelected to a three-year term at the annual meeting in voting that occurred before the latest NRA infighting became public.) On NRATV’s “series” page, North is seen alongside his nemesis LaPierre. 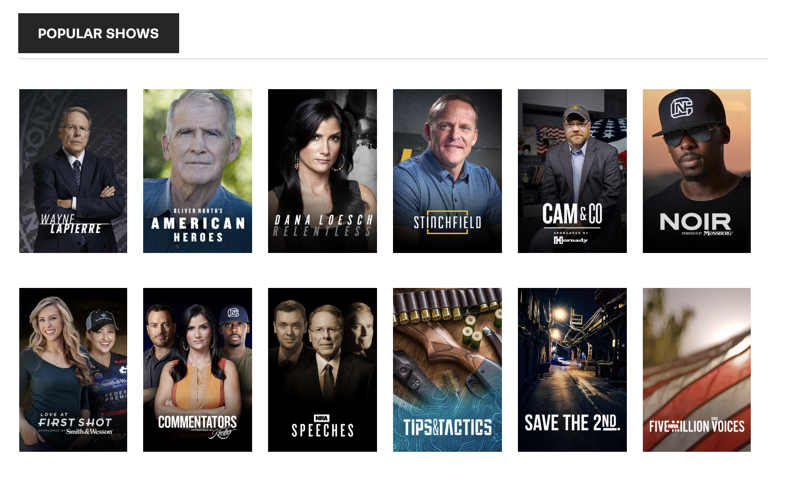 The show that North hosts, American Heroes, is a major part of the NRA’s lawsuit against Ackerman. In an updated legal complaint filed against Ackerman, the NRA alleged that the series did not deliver as many episodes as promised and did not generate as much sponsorship revenue for the NRA as expected. The few episodes that North and Ackerman have managed to produce so far are available for view at NRATV.com. Just four episodes have been released since the series’s launch in November 2018.

The civil litigation between the NRA and Ackerman is in its earliest stages and there appears to be no end in sight for the gun group’s infighting. But for now, NRATV will continue to serve as the NRA’s messaging apparatus -- even as the PR company that produces it continues to cause massive public relations problems for the NRA.