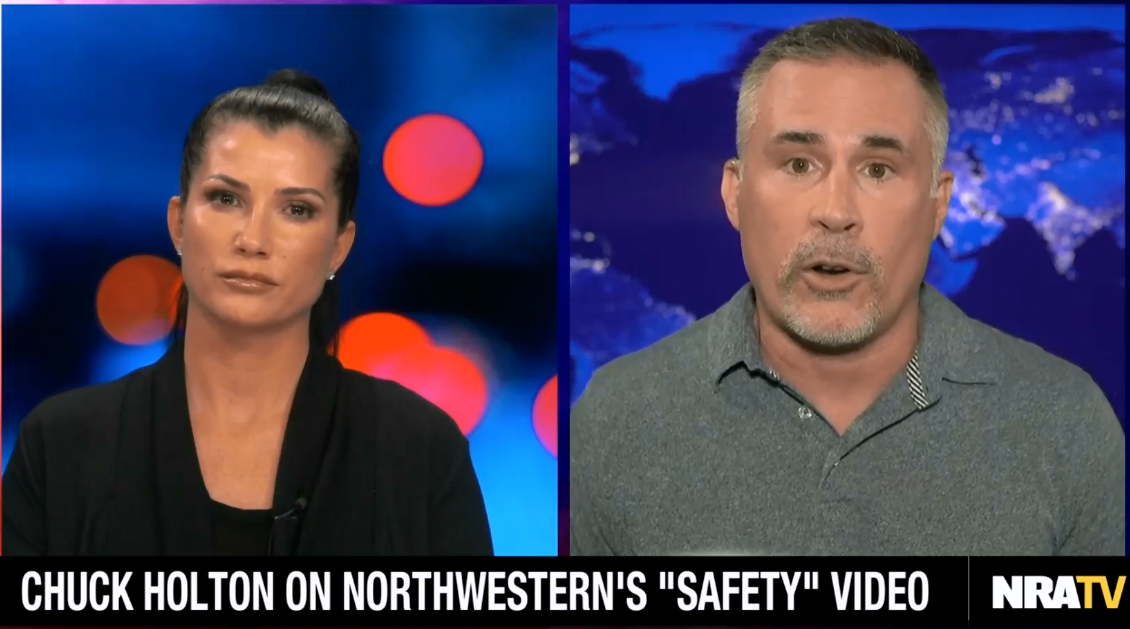 NRATV correspondent Chuck Holton irresponsibly advised people who find themselves in an active shooter situation to charge the gunman and “take him out” as the first course of action. This potentially deadly advice is contrary to Department of Homeland Security (DHS) guidelines, which advise people in an active shooter situation to first attempt to escape, then hide and make barricades if escape is not possible, and finally “as a last resort, and only when your life is in imminent danger, attempt to disrupt and/or incapacitate” the gunman.

During the November 27 edition of NRATV’s Relentless, host and National Rifle Association spokesperson Dana Loesch highlighted a Northwestern University training video based on the DHS guidelines that urges students and faculty to first run if they hear gunshots, to hide if running isn’t feasible, and to fight “as a last resort.” Loesch specifically focused on the “fight” portion of the video, criticizing the suggestions of using “anything you can use as a weapon,” such as a fire extinguisher, during a “last resort” situation.

Holton took particular issue with the “linear thinking” of run, hide, fight and called it “run, hide, and die,” arguing that victims will be waiting for their “turn to get a bullet to the head.” (Holton, in fact, misrepresented the guidelines, which do call for physically confronting the gunman as a last resort when other better options are exhausted and do not advocate waiting around to die.) He claimed, “It says a lot about our culture that we’re not training our sons that you need to be the hero” and instead suggested, “You find the guy that is hurting other people, you go after him, and you take him out.” Holton also added that if “you are a capable male in the American population, then your mindset should not be run, hide, and then fight. It should be find, fix, and finish,” apparently excusing women from his erroneous advice.

CHUCK HOLTON (NRATV CORRESPONDENT): Look, I sit on the board of a company that does security training around the country and around the world. And I can tell you that people do want the ability to be able to protect themselves. But today’s culture kind of trains that out of them. And it says, “No, no, no, no, you can’t do that. Only people who are qualified and trained can do anything.” One of the things that they’re even seeing problems with in the U.S. military today is that guys are coming into the military that have literally never enforced their physical will on another being in their life. And so they don't have any idea how to do that. They’ve been taught in a zero-tolerance school for violence at all. And that’s not necessarily bad except for the fact that this is what you end up with.

Now, look, instead of run, hide, and die, which is essentially what they’re training them to do -- I mean, if you think about it, if you are training them -- we didn’t get to show the rest of that video that Northwestern put out -- but the first two-thirds of that video is all about how to run away and how to hide. Look, if you’re in a wheelchair or you’re not capable, well, OK, fine. But if that is the linear thinking that we’re going to engage in, run and hide, then people are going to literally be waiting to die in a situation like that. They’re going to be coming in and just basically, go, hide, and wait your turn to get a bullet to the head. Every second in a situation like that, that you wait, somebody else is dying. And I think it says a lot about our culture that we’re not training our sons that you need to be the hero in this situation.

Look, being a hero is chosen for you very often. You didn’t wake up that day, just like Col. [Oliver] North says, and think, “I’m going to be a hero today.” You’ve gotta be trained and prepared to be a hero every day. And one of the things I trained my sons is that wherever you go, people should be safer because you are there. And that means that if you find yourself in a situation like this and you are a capable male in the American population, then your mindset should not be run, hide, and then fight. It should be find, fix, and finish. That is, you find the guy that is hurting other people, you go after him, and you take him out. You do whatever you have to do. And if somebody’s got to die, you stand up and you go, “I am the one that’s willing to die today rather than Dana Loesch or that lady over there or that little kid. I am the one that’s willing to -- I am that man that’s is going to go in and take that guy out.” And I think we need to train our boys more in that line of thinking.

In reality, Holton’s irresponsible advice goes against DHS guidelines in its “Active Shooter: How To Respond” guide, which specifically tells people not to seek out the gunman as a first measure. 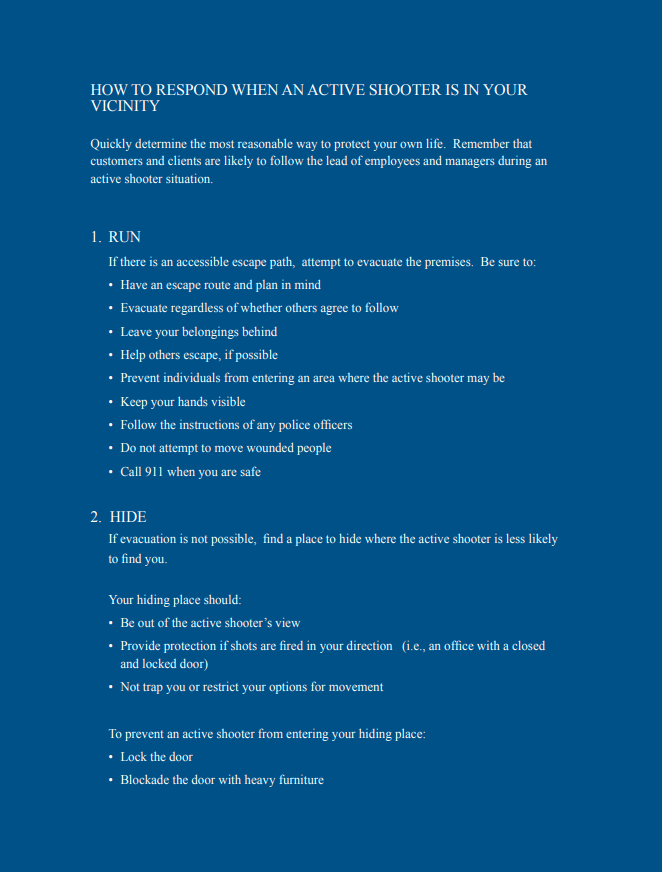 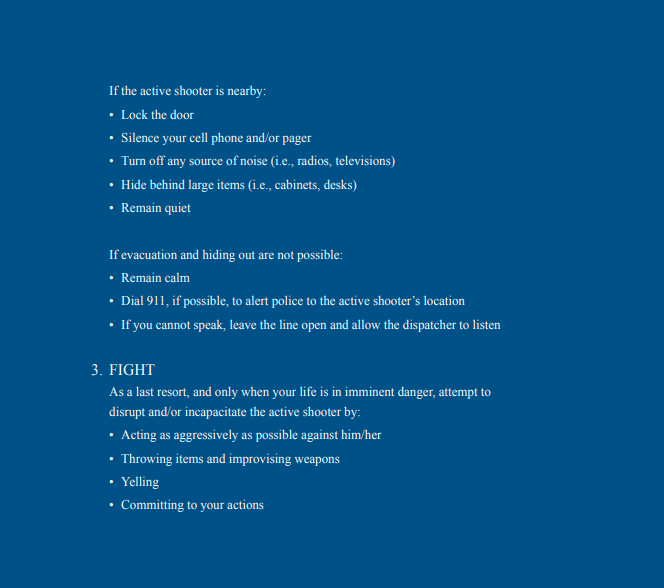