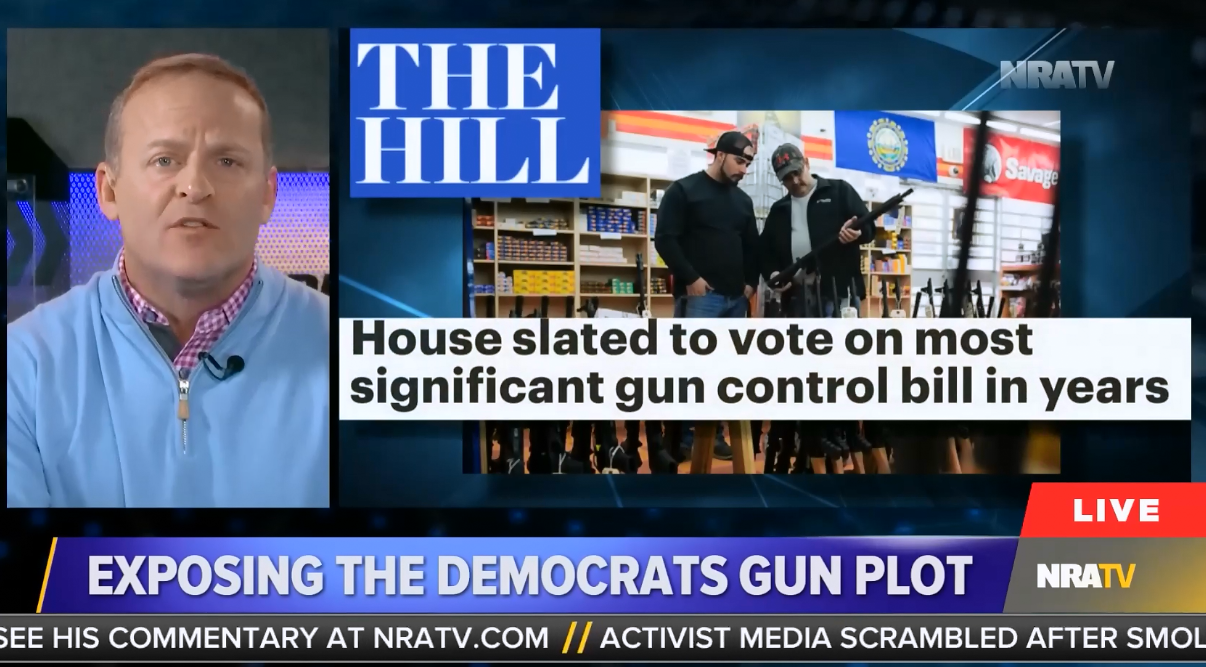 Hours before the House of Representatives is scheduled to vote on HR 8, a bill requiring universal background checks for gun sales, the National Rifle Association’s online broadcast outlet NRATV made a last-minute effort to push a deluge of falsehoods about the legislation, including claiming that it would “make felons out of good, hard-working Americans.”

For the first time in over two decades, the House will vote on gun safety legislation that would require a background check on all firearm sales in the country. Under current federal laws, background checks are required only for gun sales through a licensed dealer. Individuals who do not have a license to sell firearms can still sell guns to others in “private” sales, which often occurs at gun shows, over the internet, or through newspaper classified ads. Under HR 8, the vast majority of gun transfers would now require a background check, although the new bill makes several exceptions for “gifts to family members” and for temporary transfers of firearms for “hunting, target shooting, and self-defense.”

During his February 27 broadcast, NRATV host Grant Stinchfield spewed falsehoods about the new bill, claiming it could cause gun purchasers to “wait up to 10 days” for a firearm. In fact, the bill does not include a waiting period, and the National Instant Criminal Background Check System typically completes background checks for gun sales within a few minutes.

Stinchfield also falsely claimed that HR 8 would make “felons out of good, hard-working Americans because they made a mistake,” echoing the tired and false NRA talking point that background check bills seek to criminalize routine and obviously noncriminal gun use.

He went on to insist that the bill is “filled with feel-good ideas that do nothing” to impact gun violence and baselessly claimed there are “tens of thousands” of instances of unrecorded defensive gun uses.

Among other misleading claims, Stinchfield questioned the constitutionality of requiring background checks for gun sales -- even though there is no serious legal debate over the constitutionality of such provisions -- and claimed that family members will have to “jump through hoops” to transfer firearms among themselves, even though the bill explicitly exempts many intrafamily transfers.

STINCHFIELD: If you want to look at statistics, there are tens of thousands of uses of firearms that are not recorded, that have saved lives. Simply someone drawing a firearm at a would-be criminal that is threatening them stops the crime. That’s never recorded anywhere. Guns in the hands of good people save lives. That is an absolute fact.

There is no evidence to support Stinchfield’s claim that this bill will prevent the “tens of thousands of” uncounted defensive gun uses every year. The consensus among gun violence researchers is that firearms are used more often to commit crimes than to prevent them. In fact, defensive gun use is so rare that it’s difficult to measure. Researchers have instead conducted surveys asking respondents about different types of gun uses, and the results demonstrate that criminal gun uses far outpace defensive uses.