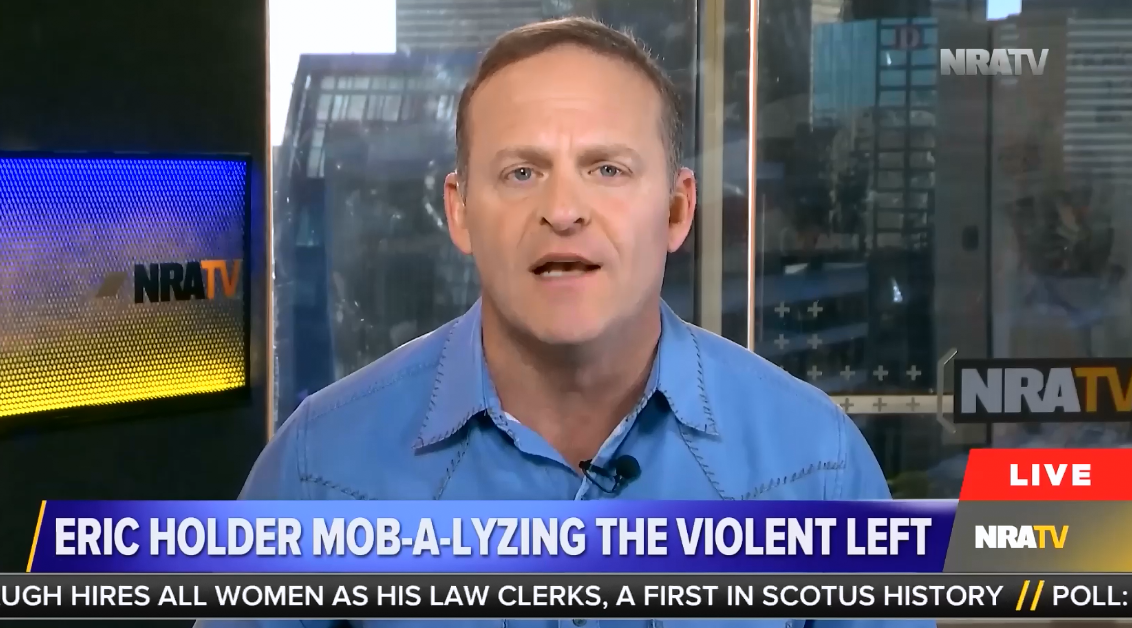 Stinchfield said Holder whipped “his Democratic sheep into a laughing frenzy” while campaigning for Georgia Democratic candidates when he told a crowd he disagrees with former first lady Michelle Obama’s 2016 elections slogan, “When they go low, we go high.” Instead, Holder said, “When they go low, we kick them. That’s what this new Democratic Party is about." Shortly after Holder made that statement, he added that he doesn’t “mean we do anything inappropriate, we don’t do anything illegal” but that “we got to be tough” and “we’re willing to fight for the ideals of the Democratic Party.”

During the October 11 edition of his NRATV show Stinchfield, Stinchfield claimed several event attendees’ chants of “fight, fight, fight” during Holder’s comments were “a call for violence” and said Democrats are “the ultimate in mob rulers.” The chants, which Stinchfield didn’t air, were nothing more than what you’d hear at an average sporting event:

He went on to say they’re wearing their violent side “as a badge of honor”:

GRANT STINCHFIELD (HOST): Want anymore evidence that the left is mob-a-lyzing? Eric Holder, the mastermind behind the disastrous Fast and Furious fiasco and the corrupt Obama DOJ, warns he’s done with taking the high road. Watch this.

STINCHFIELD: Hardy har har har. Ho ho ho, isn’t that so funny? You hear that? Holder whips his Democratic sheep into a laughing frenzy, thinking the whole thing is just a big joke. But in the end they chant “fight, fight, fight.” If that doesn’t qualify as a call for violence, I don’t know what else does. Not only that but Eric Holder says he’s proud as hell to be a Democrat. Proud of his party’s history. Maybe he doesn’t remember, but the Democrats are the party of suffocating taxes. The party of corrupt elections, the party of censorship, the party of Woodrow Wilson, the party of violence. The ultimate in mob rulers. There is no shame in the Democratic Party anymore. There is no attempt to hide their violent side. They’re openly embracing their party’s violent past, wearing it as a badge of honor.

Holder’s rhetoric was softer than what is typically heard from the NRA. In an October 2017 ad, the group’s national spokesperson Dana Loesch claimed that opponents of President Donald Trump “will perish in the political flames of their own fires.” Loesch has also praised Trump for “curb-stomp[ing]” the mainstream media, while NRA board member Ted Nugent -- who has a lengthy history of using violent rhetoric, including calling for President Obama to be hanged -- compared Democrats to “rabid coyotes” just months ago, and said to “keep your gun handy, and every time you see one, you shoot one.”