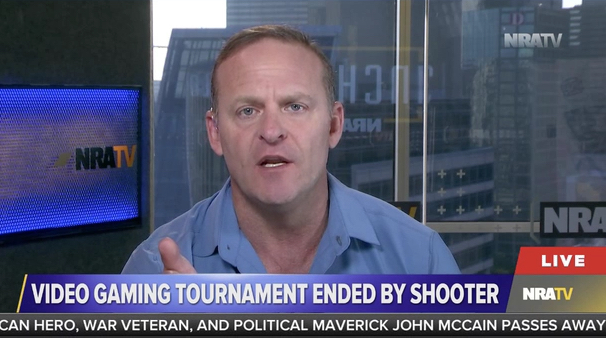 Grant Stinchfield, a host for the National Rifle Association’s NRATV outlet, reacted to the mass shooting at a video game tournament in Jacksonville, FL, by criticizing a survivor who shared video of the incident for supposedly not hearing the shooting over his headphones.

The August 26 shooting, which took place at a Madden 19 tournament, left two people dead and nine others wounded.

The NRA, and NRATV, frequently focus on what victims of high-profile mass casualty could have supposedly done to avoid being shot rather than focusing on how the perpetrator was able to access weapons to carry out the attack.

During the August 27 broadcast of NRATV’s current events show Stinchfield, Stinchfield played a video (warning: disturbing) from tournament participant @LaYzR96 that he said showed the survivor not reacting to the shooting because he was wearing headphones. Stinchfield said, “There’s no running for cover, there’s not even any looking around. They’re still focused on the screen in front of them as someone is firing a handgun through the crowd.”

Stinchfield apparently is mistaken about what the video shows. No one is seen wearing headphones and the only headphones seen in the shot are draped over a computer monitor, not on someone’s head. The person filming seems aware of the shooting as it happens since the camera moves around without focusing on the screen. He also later tweeted about being “in shock that I actually was witnessing this when it was live.”

From the August 27 edition of NRATV’s Stinchfield:

GRANT STINCHFIELD (HOST): If you look at that video and can we play it with the audio up because I want to show you something that’s very, very important of that gaming video there. If we could pull it up. And I want you to listen to the shots as it happens. What I really want is the other video. You can hear the shots in the background here, I count 15 of them, but the other video where the cellphone is over the shoulder of the person as they’re playing. Just scroll through this for one second because, this is so important. Here it is.

If you listen over the talking that person doesn’t hear the shots. Why? Because their headphones are on. This is another example of people not being aware of their surroundings. I heard at least four, or five, or six shots while that person was taking a cellphone video of the game. There’s no running for cover, there’s not even any looking around. They’re still focused on the screen in front of them as someone is firing a handgun through the crowd. You’ve got to be aware of your surroundings at all places. I know it’s hard when you’re wearing headphones, but we talk about this all the time, whether you’re jogging and wearing headphones, whether you’re at a video game wearing headphones, if they’re so loud you can’t hear what’s going on around you, you are living in your own world. That can become deadly.