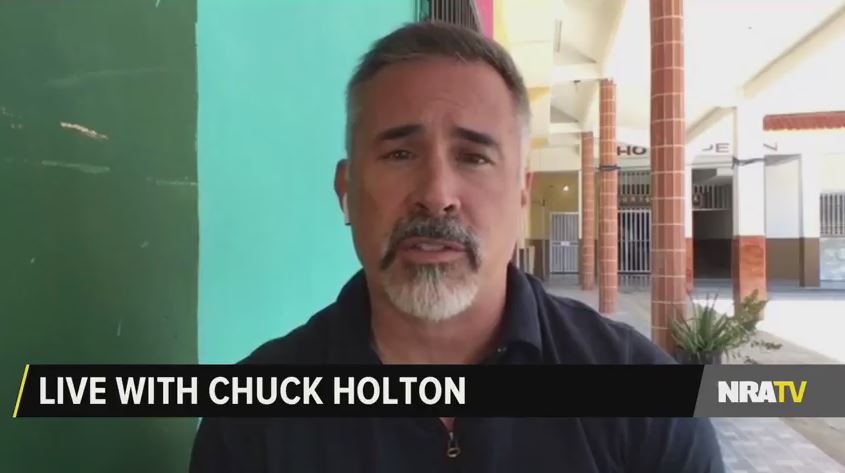 Just hours after news broke of a mass shooting in a Sutherland Springs, TX, church that left 26 people dead and at least 20 more wounded, Chuck Holton, a correspondent for NRATV -- the National Rifle Association’s media arm -- tweeted that “If your church doesn’t have a security team, get one” with a link to LionHeart International Services Group:

If your church doesn’t have a security team, get one. https://t.co/BSebseuz3P. Praying for my brothers in TX.

It is legal to carry concealed guns in churches in Texas, unless the property owner gives written or oral notice prohibiting the practice.

As is custom for the NRA following high-profile public mass shootings, the organization itself has gone silent.

Update: During a November 6 episode of Stinchfield, NRATV’s hourly 10-minute update show, host Grant Stinchfield interviewed LionHeart International Services Group president and founder Tim Miller, who said it is time “for our churches to team up and train up” and that smaller churches need to “start prioritizing physically protecting their congregations and that means they've got to get serious about developing a plan and training the right people.” During the segment, Miller plugged his own company’s trainings for churches, saying, “Our guys are used to training police officers and federal agents.” Neither Miller nor Stinchfield disclosed Holton’s position with LionHeart:

TIM MILLER: It really is time, though, Grant -- we’ve been talking about this -- for our churches to team up and train up. These smaller churches are the majority of churches in our country. And it’s time for them to start prioritizing physically protecting their congregations and that means that they’ve got to get serious about developing a plan and training the right people. Because if you think of one well-trained person yesterday, that may have made all the difference.

GRANT STINCHFIELD (HOST): You know, Tim, I had worked very closely with two of the lawmakers that pushed through this new law in Texas that allows churches to organize their own volunteer private security without having to go through the requirements of registering as a security force. It was imperative that this got pushed through -- it did in the last legislative session -- and it allows now churches to basically have this volunteer security force without the fear of not following licensing properly or lawsuits or any of those things. And it gives them protection to take matters back into their own hands. It’s a good law.

TIM MILLER: It’s a great law. And now what has to happen now that folks can get the weapons that they need and can not have to worry about those requirements -- but they still must have to have great training. And that’s what we try to do when we go into churches. A team is only as good as its ability to practice the skills that they have, and so when we go in, our guys are used to training police officers and federal agents. But now we really have come to realize that this is an urgent need in our country, to come in and take these great-hearted people who have taken steps to arm themselves, but they still need to train and still need to understand how to employ that weapon.