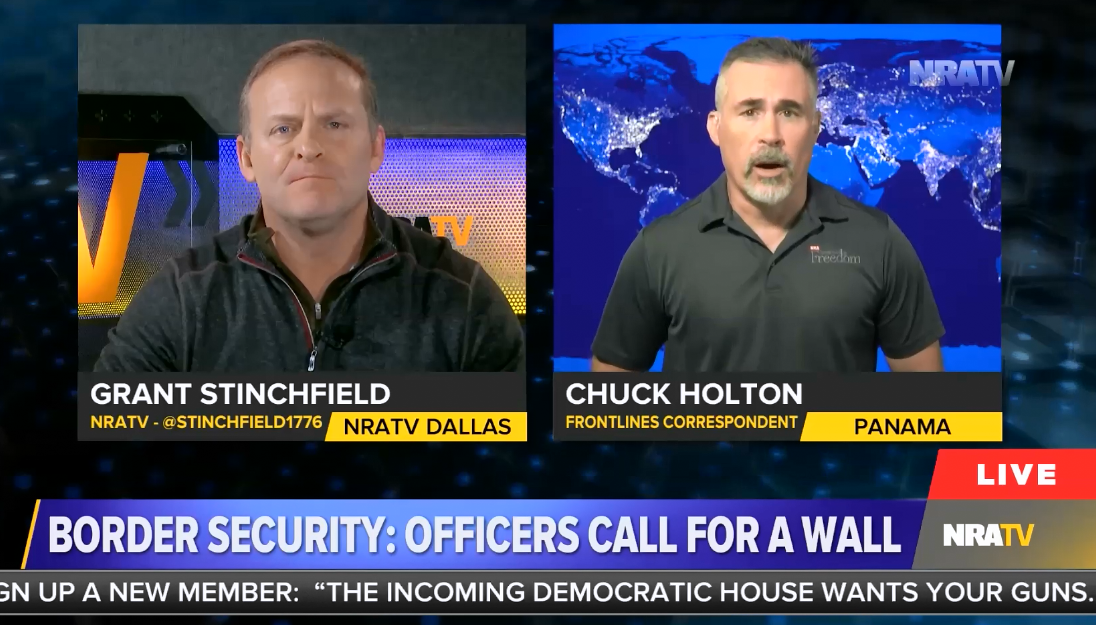 Chuck Holton, a correspondent for the National Rifle Association's broadcast outlet NRATV, echoed a longtime white nationalist talking point when he accused the Democratic Party of trying to “import another group of voters” from “the Third World” in order to “to stay in power in perpetuity.”

During the January 4 edition of NRATV’s Stinchfield, host Grant Stinchfield attacked Democrats in Congress for allegedly creating “fugitive havens” instead of supporting “anything that will make us safer along the border.” Holton agreed, claiming “they don’t care about border security” because they want to “import a new populace that will vote for them by offering them all these free benefits.”

GRANT STINCHFIELD (HOST): I’ve seen no evidence that the Democrats have ever supported border security. Ever. They voted against Kate Steinle’s law. They voted against laws to keep gangbangers out. They love sanctuary cities. Give me one piece of evidence that the Democrats have supported anything that will make us safer along the border. All they have created are fugitive havens. Well, veteran Army Ranger and Frontlines correspondent Chuck Holton has been on this story for a very long time. Chuck, welcome to the program.

CHUCK HOLTON (NRATV CORRESPONDENT): Yeah, good to see you, Grant. You are absolutely right. They don’t care about border security and that’s because they are trying to put together a voter base that will keep them in power in perpetuity. And they know that the American people are not going to allow them to stay in power in perpetuity, and so essentially what they’re trying to do is import another group of voters. They’re trying to import a new populace that will vote for them by offering them all these free benefits. Look, we have to address these pull factors that are bringing people out of -- basically all over the Third World, it’s not just the Western Hemisphere, it’s not just Latin America. I’ve been down there on the border, and I’ve seen people from India and Cameroon and Pakistan and Nepal and Afghanistan and all over Africa, Somalia. They’re all coming north and they’re all looking for the same thing. And that is, to win that lottery ticket and get across that easy-to-climb border fence that we’re seeing right there, and coming into the United States so that they can get a lot of free stuff. And, really, who can blame them?

Describing immigration as “trying to import a new populace” from “the Third World” is a common tactic advanced by white nationalist publications including VDare and American Renaissance.

Holton has a well-documented track record of using racist rhetoric, such as complaining that former President Barack Obama left a “mocachinno stain” on America, fearmongering about the Black Lives Matter movement committing mass violence against whites, and demanding Black people “join us in respecting authority and taking responsibility for your own actions.”

Previously while speaking about immigration on NRATV, Holton repeatedly pushed the conspiracy theory that philanthropist George Soros is behind the migrant caravan, a remarkably similar conspiracy theory to the one that motivated a gunman who carried out a mass shooting in a Pittsburgh, PA, synagogue in October. He also said that the migrant caravan is “an invasion under the guise of migration.”

The NRATV correspondent also has a symbiotic relationship with white nationalists; he has previously repeated the white nationalist talking point that cultural “homogeneity” is responsible for low crime rates, repeatedly promoted the work of scientific racist Stefan Molyneux, and been praised by neo-Nazi website The Daily Stormer.