NRATV correspondent Chuck Holton tweeted a picture of himself with a black waiter on April 16, writing that he “ran into Barack Obama” in Rio de Janeiro, Brazil, who finally has “a job which meets his qualifications.” 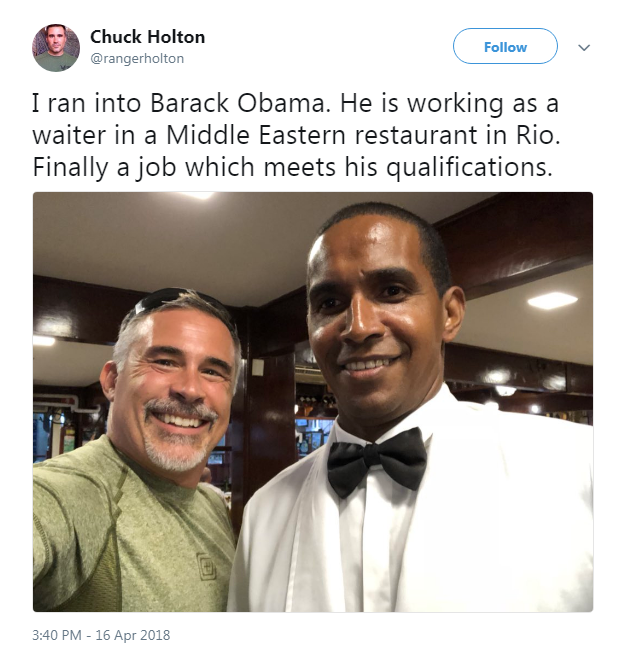 Holton appears daily as a commentator on NRATV’s news-of-the-day show Stinchfield and has guest hosted the program when the show's host Grant Stinchfield is out. He also co-hosts NRATV international affairs program Frontlines with Oliver North.

Holton has a history of making disparaging and sometimes racially charged comments about the former president. In November 2016, Holton commented that a picture of President Donald Trump shaking Obama’s hand was a photo of “Trump grabbing a pussy.” Two days after Trump’s inauguration in 2017, Holton made a reference towards Obama’s race when he tweeted, “Let’s get busy scrubbing Obama’s mocacchino stain off of America!”

In August 2016, Holton called into the NRA’s talk radio show Cam & Co. to say that white privilege is just “a culture of responsibility,” and told black Americans, “You’re welcome to come. All you have to do is join us in respecting authority and taking responsibility for your own actions.” During a July 2017 appearance on Stinchfield, Holton warned of the prospect of Black Lives Matter protesters committing mass rape and murder against white people.