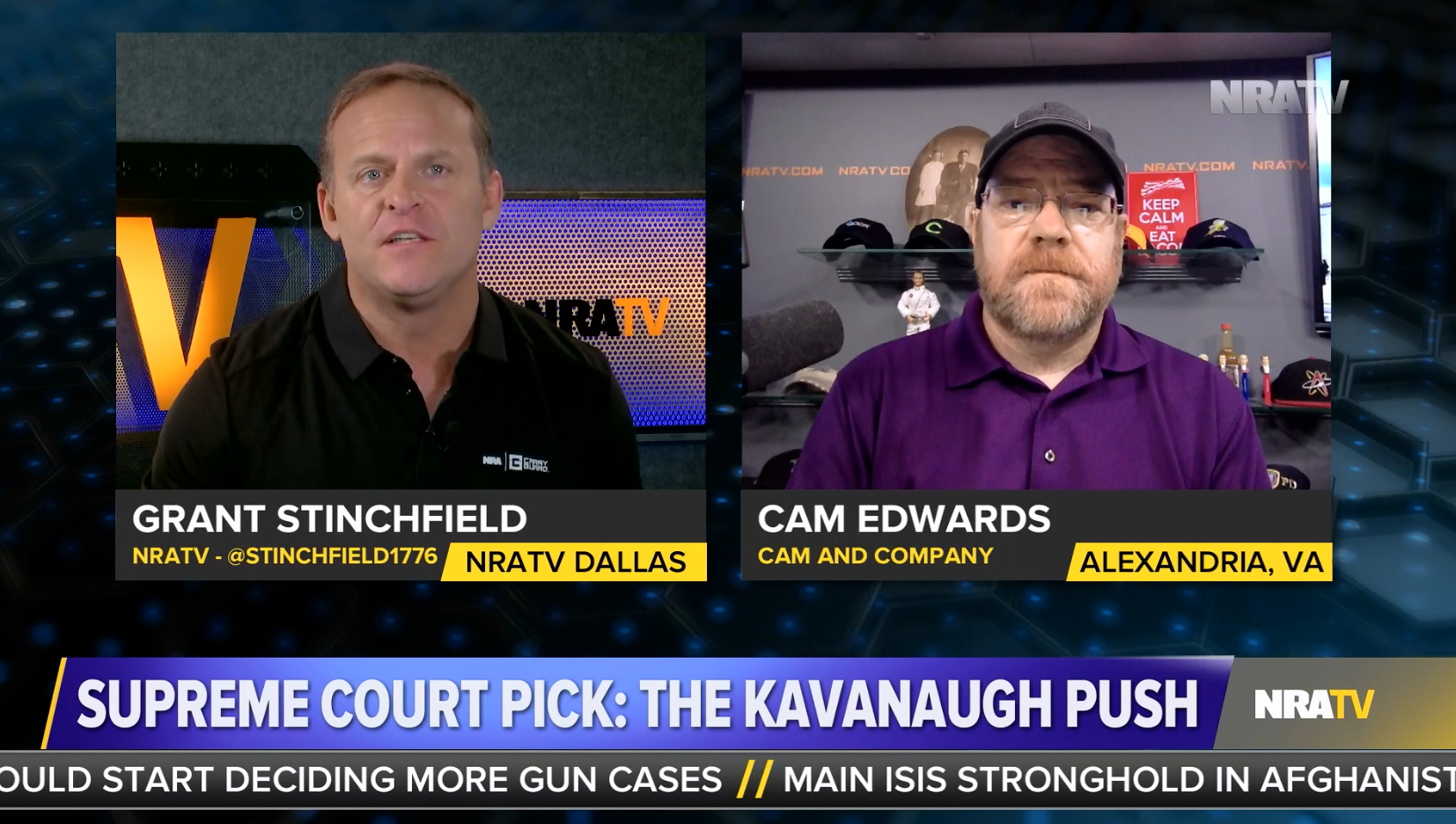 Immediately after Judge Brett Kavanaugh was nominated to the Supreme Court, NRATV, the media arm of the National Rifle Association, cheered a dissent he wrote that argued bans on assault weapons are unconstitutional under the Second Amendment. That view is far outside of mainstream legal thought.

On July 9, President Donald Trump announced Kavanaugh, a judge on the D.C. Circuit of the U.S. Court of Appeals, as his nominee to fill the seat vacated by Justice Anthony Kennedy and praised his “impeccable credentials, unsurpassed qualifications, and ... proven commitment to equal justice under the law.” Trump picked his nominee from a shortlist of four right-wing federal appeals court judges, and a mounting number of Democratic senators have announced that they will oppose Kavanaugh’s confirmation.

The National Rifle Association Institute for Legislation Action -- the NRA’s lobbying arm -- put out a press release on July 9 applauding Kavanaugh as an “outstanding choice” and highlighting his “impressive record that demonstrates his strong support for the Second Amendment.”

In a 2011 challenge to D.C.’s assault weapons ban, known as Heller II, Kavanaugh split from the rest of the D.C. Circuit Court and wrote a dissenting opinion arguing that “semi-automatic rifles, like semi-automatic handguns, have not traditionally been banned and are in common use by law-abiding citizens for self-defense in the home, hunting, and other lawful uses.” He went as far as to claim that “a ban on a class of arms …. is equivalent to a ban on a category of speech.”

Based on this position, Kavanaugh would consider bans on the type of firearms most typically used during mass shootings -- including those used in recent massacres in Parkland, FL, Sutherland Springs, TX, and Las Vegas, NV -- unconstitutional. This view is entirely at odds with how federal courts have ruled on the issue. According to The Washington Post, “no federal appeals court has ever held that assault weapons are protected” by the Second Amendment.

NRATV host Cam Edwards immediately celebrated Kavanaugh’s dissenting opinion, tweeting that it was “a better reasoned argument than the majority opinion.” During the July 10 edition of NRATV’s Stinchfield, host Grant Stinchfield suggested gun owners and NRA members “take this appointment as a reward for our hard work” and hailed Kavanaugh as a “strong dissenting voice in the court’s decision to unfortunately uphold the D.C. ban on so-called assault weapons.” NRATV host and spokesperson Dana Loesch said she was “very pleased” with Kavanaugh’s dissenting opinion during her show Relentless later that same day.

GRANT STINCHFIELD (HOST): So, Cam, you’ve been in and around this for a long time. Most of us are looking at the [District of Columbia v.] Heller go-around number two. Dianne Feinstein mentioned it, this was when Kavanaugh dissented in the D.C. ban on so-called assault weapons. Have you looked through that ruling? What does it tell you about Kavanaugh?

CAM EDWARDS: I have looked through the ruling, Grant, and it’s a great decision. I mean, it’s a great opinion by Judge Kavanaugh. I wish that his opinion had carried the day because he actually looked at what the Supreme Court said in Heller and McDonald [v. Chicago]. And he said, look, it doesn’t matter if I like these gun control laws or I don’t like these gun control laws. What matters is that, under the precedent set by Heller and ratified by McDonald, so we know that these Second Amendment protections don’t just apply to infringement by the federal government, D.C.’s blanket ban on the most commonly sold rifle in America today doesn’t pass constitutional muster. And he made a very commonsense argument. He said, look, in the Supreme Court said in the first Heller case that you can’t ban semi-automatic handguns because those are in common use by millions of Americans for lawful purposes. Well, what’s the difference between a semi-automatic handgun and a semi-automatic long gun? They’re both in common use, both owned by millions of Americans for lawful purposes. If you can’t ban one, you can’t ban the other.

Kavanaugh’s dissenting opinion is a radical interpretation of the 2008 case District of Columbia v. Heller, in which the Supreme Court struck down D.C.’s handgun ban in a 5-4 decision. The 2008 ruling, authored by Justice Antonin Scalia, explained that the Second Amendment right is “not unlimited” and that there is no “right to keep and carry any weapon whatsoever in any manner whatsoever and for whatever purpose.” Specifically, the Heller opinion said that “dangerous and unusual” weapons can be banned under the Second Amendment, which is the rationale federal courts have relied upon in upholding bans. In April, a federal district court judge (who was appointed by Ronald Reagan) rejected a Second Amendment challenge to Massachusetts’ assault weapons ban by positively citing Scalia’s language from Heller that explained cases where gun ownership can be limited.

Kavanaugh, however, has signaled he would advance the NRA’s interpretation of the constitutionality of assault weapons bans, which defies mainstream legal thought.