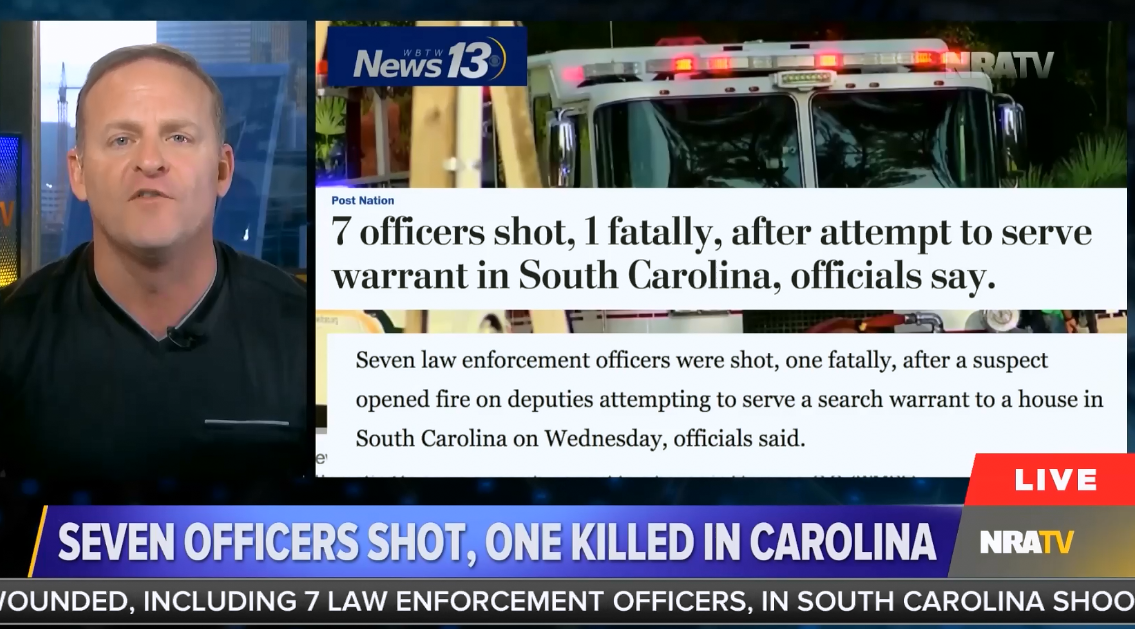 After a shooting in South Carolina left six police officers wounded and one killed, Grant Stinchfield, a host for the National Rifle Association’s media operation NRATV, suggested that the ambush was provoked because law enforcement “has been tarnished by the media and the left.”

On October 3, a gunman opened fire on police officers in Florence, S.C., who were attempting to serve a search warrant at his home. Sgt. Terrence Carraway was killed, and six of his fellow officers suffered gunshot wounds. The suspect, who had barricaded himself inside the home with “an unspecified number of children,” was arrested after a two-hour standoff.

During the October 4 edition of NRATV’s Stinchfield, the host claimed police officers “are now all often being targeted” after “being shamed by leftists raging against authority” before mentioning the seven officers who “faced a shooter hellbent on killing them all”:

GRANT STINCHFIELD (HOST): Putting on a badge is like putting on a target. The rich tradition of serving as a law officer has been tarnished by the media and the left. Worse than officers being shamed by leftists raging against authority, they are now all often being targeted. Brave officers in Florence, South Carolina, faced a shooter hellbent on killing them all. The shooter hit seven officers who had been called to a home to make an arrest. He was holding children hostage. The shooter had an advantage over the officers and rained bullets over them.

Despite Stinchfield’s claim, investigators have not determined a motive for the shooting.

The Associated Press reported that 74-year-old suspect Fred Hopkins posted on social media about “being a competitive marksman and taking his children shooting with him.” In one post, he wrote that he has been “shooting competitively since 1984.” On his Facebook page, Hopkins listed “Shooting sports” and “Long Time Member of the Nra” among his likes.