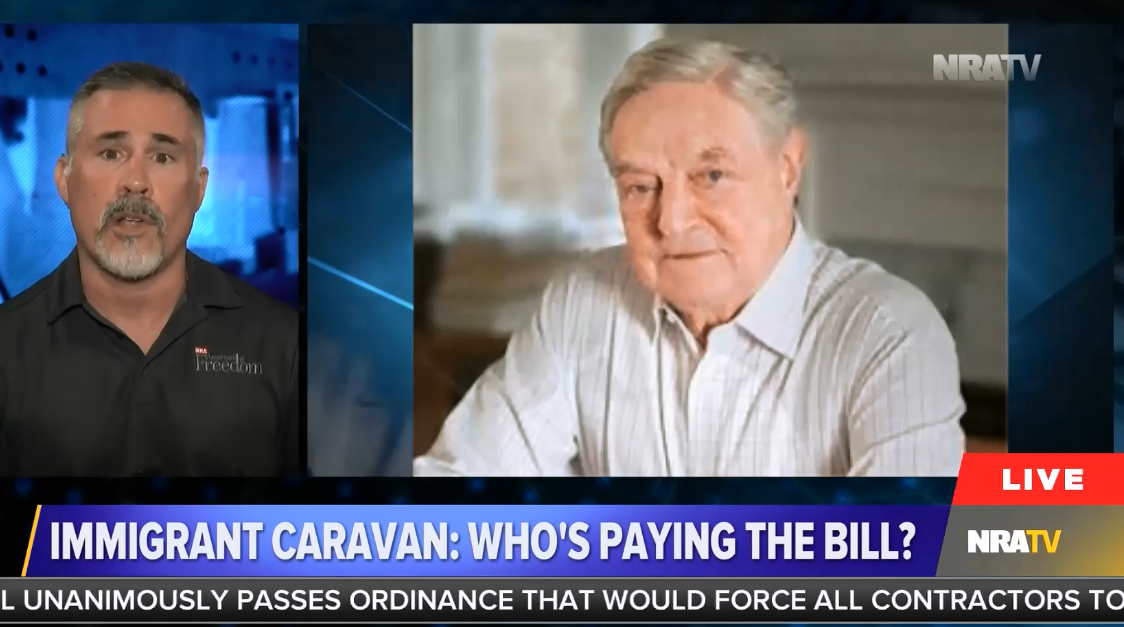 Grant Stinchfield, host of the National Rifle Association's media outlet, NRATV, said he felt “disgust” for the “devious media and the liberals they serve,” who he said blame the shooting at a synagogue in Pennsylvania on “everything but themselves and ... the shooter.” Stinchfield conveniently ignored the fact that NRATV relentlessly pushed conspiracy theories about the migrant caravan that were similar to those the gunman embraced.

On October 27, a gunman armed with an AR-15 assault weapon and three handguns opened fire in the Tree of Life synagogue in Pittsburgh, PA, killing 11 people and wounding six others, making this the deadliest anti-Semitic attack in American history. The gunman frequently posted on the far-right social media network Gab, where he repeatedly threatened the Jewish community and spread conservative conspiracy theories about a migrant caravan of refugees headed for the U.S. Specifically, the gunman pushed the conspiracy theory that Jews are behind the caravan.

While not mentioning any of the gunman’s right-wing conspiracy theories, NRATV host Grant Stinchfield accused the media of trying to play the “blame game” and said that “devious media and the liberals they serve want to blame everyone and everything but themselves” for the shooting. He went on to claim President Donald Trump and NRATV “have never issued calls for violence” and said, “It’s Democratic leaders who make room for antifa to riot and call on Trump haters to harass his supporters.” During his comments on the October 29 edition of Stinchfield, he also called the victims of the attack “pawns now in the game to destroy our president and his party just days before the midterms”:

GRANT STINCHFIELD (HOST): When I look at the face of the devil, in a man that decided to take 11 lives simply because of their faith, I get angry. So many emotions rush through my mind -- grief for the victims, sadness for their families and a world where far too many killers among us. But I also feel disgust. Disgust for the media and the political propaganda they spread just moments after a deadly, heinous crime. It’s not just the calls for gun control and so-called assault weapons bans, but it’s the blame game that makes me angry. The devious media and the liberals they serve want to blame everyone and everything but themselves and of course the shooter, who is ultimately responsible. This time the blame reached an all-time low. Over and over again, the media from the anti-Trumpers on Meet the Press to everyone on CNN and beyond pushed this bogus, insane idea that somehow President Trump is responsible for a deranged lunatic going on a killing spree inside a synagogue in Pittsburgh.

STINCHFIELD: It is absolutely shameful. Shameful. 11 people dead, injured law enforcement, all pawns now in the game to destroy our president and his party just days before the midterms. President Trump has never issued a call for violence and they know it. We as conservatives, we at NRATV have never issued calls for violence either. Yet they have the gall to blame President Trump for this shooting when it’s Democratic leaders who make room for antifa to riot and call on Trump haters to harass his supporters.

In actuality, NRATV hosts themselves have repeatedly pushed conspiracy theories about the migrant caravan; NRATV correspondent Chuck Holton claimed during an October 19 NRATV broadcast that “a bevy of left-wing groups are partnering with a Hungarian-born billionaire [George Soros] and the Venezuelan government to try to influence the 2018 midterms by sending Honduran migrants north” in a caravan. Soros is a prominent Jewish philanthropist who frequently makes donations to liberal and progressive causes.

During another recent NRATV appearance, Holton falsely claimed that Soros was funding the caravan and said that he is “an expert at sowing chaos and discord around the world.” Holton went on to say that Soros’ views are “at odds with civilization as a whole” and said, “The guy really makes a kind of perfect Bond villian, don’t you think? This socialist anti-gun, anti-American agenda is nothing short of apocalyptic.”

During yet another segment Holton hosted, NRATV showed a picture of Soros above a chyron that said, “Immigrant Caravan: Who’s Paying The Bill?”

Both Holton and Stinchfield have referred to the caravan as an “invasion,” which is also how the gunman characterized it.