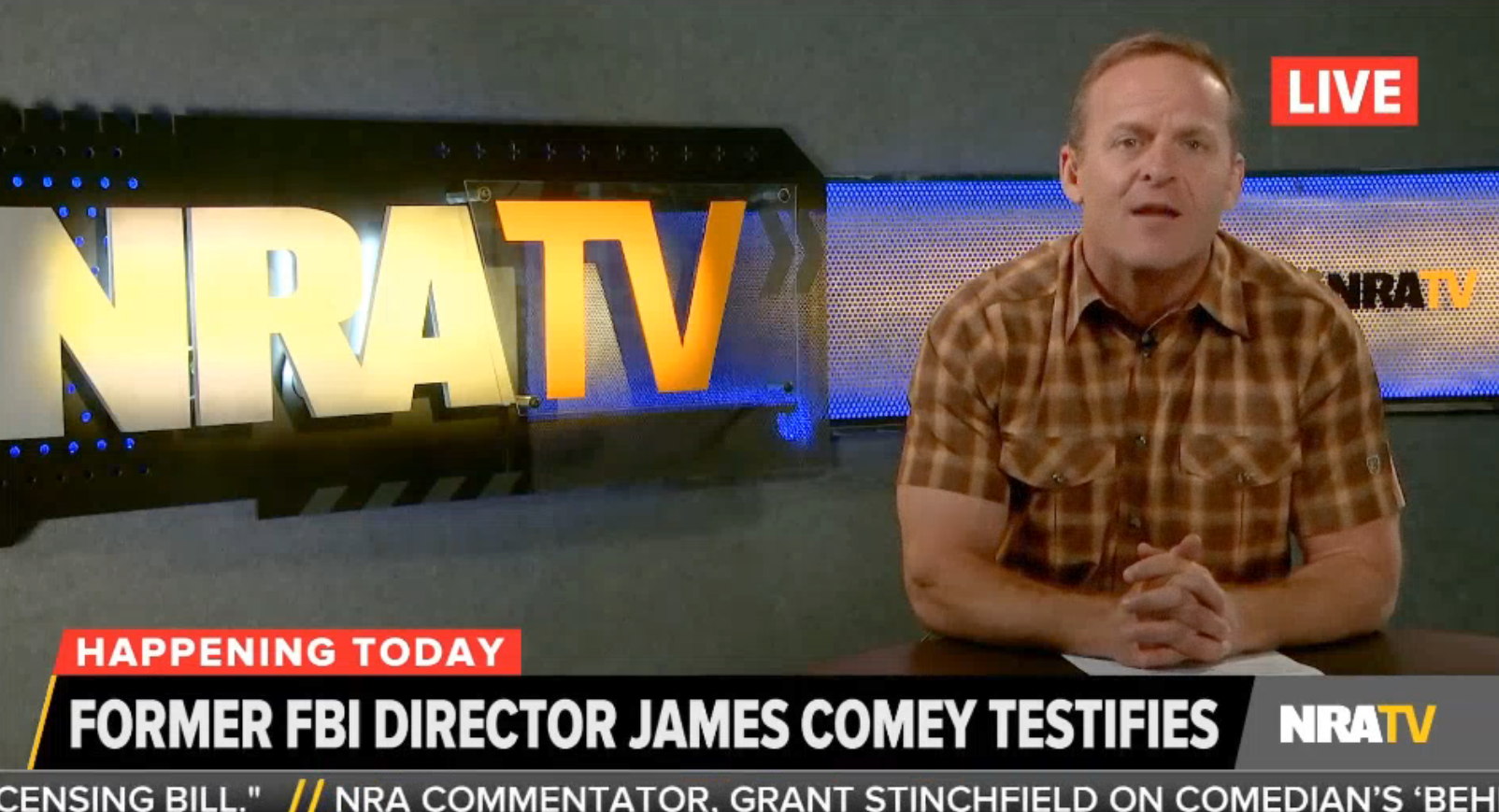 Comey testified in an open hearing before the Senate intelligence committee on June 8, almost a month after Trump abruptly fired him. Trump’s public statements on the firing have caused numerous legal experts to warn that Trump may have obstructed justice by improperly interfering with an FBI investigation.

NRATV was quick to jump to Trump’s defense before and during Comey’s appearance. During the 11 a.m. edition of its program Stinchfield, which provides live news updates at the top of the hour from 9 a.m. to 1 p.m. EST, host Grant Stinchfield said the hearing came down to one question: “Did [Trump] ever try to obstruct justice in any way?" He said Comey answered, “No”:

GRANT STINCHFIELD (HOST): Now as I look and listen to this hearing, what I see is James Comey being questioned. One, being led by the Democrats to try to sink Donald Trump, and two, by the Republicans trying to get to the heart of what this hearing is all about. Did Donald Trump try to obstruct justice when it came to this Russian investigation in any way? A direct quote when he was asked about this by the chairman of the committee, a Republican, “Did Donald Trump ever ask you to stop the Russian investigation?” James Comey’s answer, “No.” “Did he ever try to obstruct justice in any way?” James Comey’s answer, “No.”

In actuality, Sen. Richard Burr (R-NC), chairman of the intelligence committee, asked Comey whether the president was trying to find a way for former national security adviser Mike Flynn to “save face” after having been fired, or whether he was trying to “obstruct justice” when he said he hoped Comey could “let [the investigation] go.” At the time, Flynn was under investigation for his ties to Russia. Comey didn’t respond “no,” but instead said, “I don't think it's for me to say whether the conversation I had with the president was an effort to obstruct. I took it as a very disturbing thing, very concerning, but that's a conclusion I'm sure the special counsel will work towards to try and understand what the intention was there and whether that's an offense”:

RICHARD BURR: Director, when the president requested that you -- and I quote -- “let Flynn go,” General Flynn had an unreported contact with the Russians, which is an offense and if press accounts are right, there might have been discrepancies between facts and his FBI testimony. In your estimation, was General Flynn at that time in serious legal jeopardy and, in addition to that, do you sense that the president was trying to obstruct justice or just seek for a way for Mike Flynn to save face given he had already been fired?

JAMES COMEY: General Flynn at that point in time was in legal jeopardy. There was an open FBI criminal investigation of his statements in connection with the Russian contacts and the contacts themselves. And so that was my assessment at the time. I don't think it's for me to say whether the conversation I had with the president was an effort to obstruct. I took it as a very disturbing thing, very concerning, but that's a conclusion I'm sure the special counsel will work towards to try and understand what the intention was there and whether that's an offense. [CSPAN, James Comey hearing, 6/8/17]

The special counsel Comey referred to is former FBI director Robert Mueller, who is tasked with investigating “ties between President Trump’s campaign and Russian officials.”

Before the hearing even began, Stinchfield tweeted that the “testimony will be a big ‘Nothing Burger!’”

#JamesComey testimony will be a big “Nothing Burger!” But get ready for the media spin!

During the 9 a.m. update, Stinchfield claimed there was nothing wrong with Trump’s “demand for loyalty” from Comey and that in prepared testimony released before the hearing, the former FBI director “makes it clear in no way did Donald Trump ever obstruct justice.” (The prepared testimony reached no such conclusion. As Comey’s testimony during the hearing demonstrated, his view is that the question of whether Trump’s conduct could constitute obstruction of justice should be left to the special counsel.) During the 10 a.m. update, Stinchfield attempted to undercut Comey’s upcoming statements by claiming Comey was “almost posing for the camera” as he took his seat before the hearing and said, “There is no doubt in my mind that James Comey loves the spotlight. In fact, he relishes it. This is why he writes those memos, throwing Donald Trump under the bus.”

The NRA was one of Trump’s earliest supporters, spending millions of dollars to help his campaign. NRATV has long since established itself as a pro-Trump propaganda outlet, previously calling any dissent against Trump “anti-patriotic” and an “assault against freedom and the Constitution.” Stinchfield and NRATV commentator Dana Loesch have praised Trump’s “tough straight talk about the dishonesty of the media” and encouraged then President-elect Trump to continue his attacks against the press. In February, Stinchfield blamed Trump’s Russia scandal on a “concerted effort with Obama loyalists ... trying to undermine the president every step of the way.”

In January, the NRA released a video promising that the group would be “Donald Trump’s strongest, most unflinching ally.” That allegiance apparently extends to fabricating quotes from a public hearing for the benefit of the president.