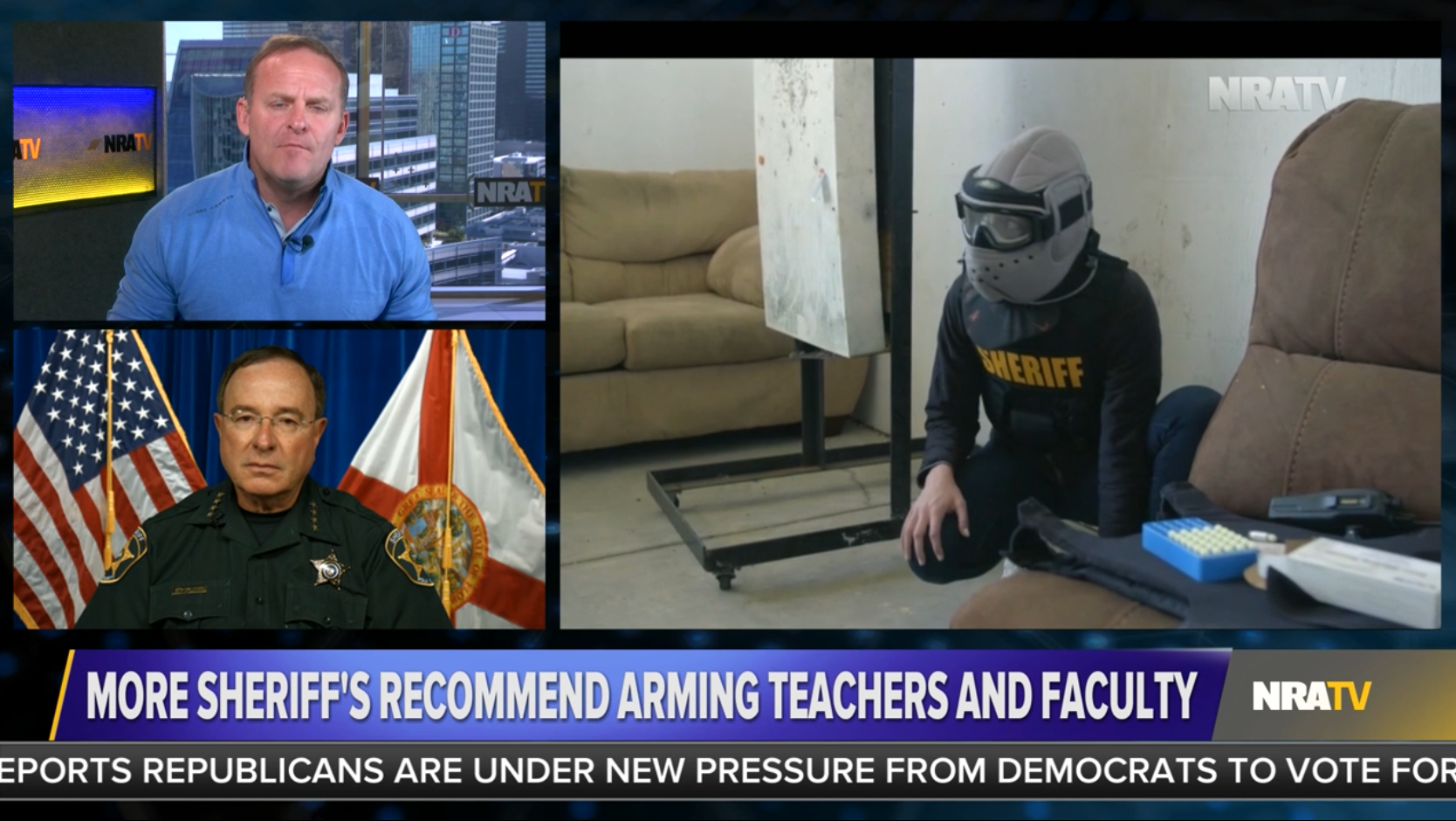 The National Rifle Association’s far-right news outlet NRATV repeatedly hosted members of a Florida school safety commission to advocate for arming teachers as a solution to school shootings. The commission, formed after the mass shooting at Marjory Stoneman Douglas High School, recently released a draft report that recommended arming teachers -- a notion that has been consistently rejected by experts, who point out that adding firearms into schools would actually increase the danger to teachers and students.

The 16-member panel was put together as part of the Marjory Stoneman Douglas High School Public Safety Act, a “sweeping school-safety law” signed by Florida Gov. Rick Scott (R) in March, a month after the Parkland school shooting left 17 dead. The panel held its initial meeting on April 24 to “investigate system failures” by reviewing Florida’s policies for active shooter situations, the use of school resource officers on campuses, and other recommendations. Members were chosen by Scott, then-Florida House Speaker Richard Corcoran (R) and then-Senate President Joe Negron (R) and included three Parkland parents -- though Andrew Pollack, whose daughter was killed in the shooting, later resigned.

On December 12, the commission released a draft report that listed “a series of failures by Broward County agencies and recommendations for avoiding a similar tragedy in the future” the Sun Sentinel reported. Among its other recommendations, the commission voted 14-1 to allow arming classroom teachers provided they go through background checks and training. A final report will be sent to the governor and state legislature by January 1.

The recommendation echoes comments made by members of the commission during appearances on NRATV. On the August 16 edition of NRA spokesperson and NRATV host Dana Loesch’s show Relentless, commission chairman and Pinellas County Sheriff Bob Gualtieri said: “The unfortunate reality is that cops can’t be everywhere all the time, and if there had been a good guy with a gun on that campus or in that building, there’s no doubt in my mind that they would have been able to minimize the carnage.”

Two weeks before the draft report was released, commission member and Polk County Sheriff Grady Judd also appeared on NRATV to praise Gualtieri’s support for arming teachers -- and to pat himself on the back for helping guide his “dear friend” toward that view after Gualtieri initially expressed discomfort with the idea. From the November 28 edition of NRATV’s Stinchfield:

GRADY JUDD: Well you know, I don’t think it was a surprise to others in Florida because Senate Bill 7026, which we pushed through, mandates armed guardians or school resource officers on every campus. Sheriff Gualtieri is a dear friend of mine and chairs the commission, I’m on that commission with him. I established that position early on as you know, through my “Sentinel program.” Bob originally -- Bob Gualtieri the chair -- was not really comfortable with that. And as I worked with him -- and he and I are dear friends and are on several committees together. And the research we developed through this shooting, it was abundantly evident had teachers, not all teachers, those that wanted to and were capable of and completed thorough training, could have and would have saved lives that day. We know one teacher that was shot by our suspect, had actually pulled himself over into a corner, and then the suspect came back and shot him again, fatally killing him, obviously. But we know he would have shot and killed the active shooter had he had a firearm. Had he had that firearm, not only would his life have been saved but so would have a lot of other children in school that day. As I’ve said over and over, Grant, this is not something we want to do. When I was a kid in school, we didn’t have to have armed security on campuses. But this is a new normal and a new day. And we have to have someone there so if we can’t discover this active murderer, shooter ahead of time, that when they arrive on campus, somebody is there to stop them before they can hurt our students and our teachers.

STINCHFIELD: You know sheriff, to me this is all common sense. I mean I don’t really even think you really need research to understand the very basic premise that [NRA executive vice president and CEO] Wayne LaPierre coined the phrase, “The best way to stop a bad guy with a gun is a good guy with a gun.” I know that research has been done, it backs up your case, but to me it comes down to just simple common sense. You’ve got to meet a threat with equal or greater force. That’s the only way to stop a threat. This does that, doesn't it?

JUDD: It absolutely does.

This is not the first time that Judd has gone on NRATV to promote arming teachers; he appeared on NRATV in 2016 to discuss Polk County’s “Sentinel program” that allows Southeastern University to arm “select faculty and staff.” After his naming to the commision, Judd appeared on the network at least five other times to push for more guns in schools.

Despite NRATV hosts promoting Judd’s program and praising Gualtieri’s recommendation, there is little evidence that arming teachers or other civilians will stop mass shootings. An FBI study of 160 active shooter incidents between 2000 and 2013 found that only four incidents were stopped by armed security guards and one was stopped by a licensed and armed citizen -- compared to 21 incidents stopped by unarmed citizens. A working paper released in March by Johns Hopkins University education professor Sheldon Greenberg that relies on analysis of police officers’ confrontations with armed suspects also concluded that arming teachers would do more harm than good. CityLab explained:

In two roundtable discussions Greenberg held with law enforcement in January 2013 (in the aftermath of Sandy Hook), police officers voiced a range of other concerns about arming teachers, including the erroneous assumption that a teacher would be in proximity to the shooter, the likelihood that an armed teacher and plainclothes police officer (who would be the first to arrive on the scene) would mistake each other for an active shooter, and the fact that teachers’ firearms training would be a one-off event.

“Basically, it’s highly unlikely that there will be an incident in the first place,” said Greenberg. “And the risks outweigh the potential benefit.”