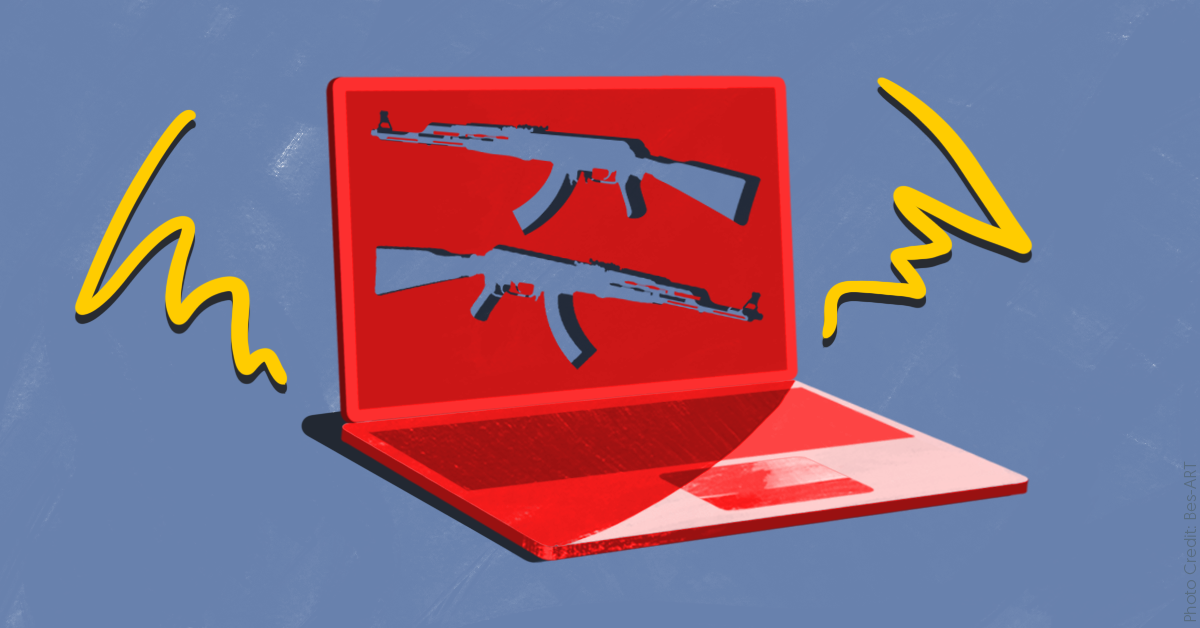 The Daily Stormer -- a major online hub for racists and anti-Semites that has followers who have committed mass murder -- has been telling its readers to join the National Rifle Association, as the neo-Nazis who run the website see a successful NRA as their best possible hope to see Jewish people subjected to another Holocaust.

The Daily Stormer has been very pleased with the NRA’s hard-line messaging in the Trump era: As the neo-Nazi website itself notes, the NRA frequently singles out Jews as its political enemies and refuses to condemn anti-Semitic actions taken by members of its leadership. A February 2017 Daily Stormer article explained, “There is basically zero chance that [NRA leader Wayne] LaPierre and others in the top ranks of the NRA aren’t aware of the Jewish issue, especially as it relates to the second amendment. They’ve remained silent on this topic until now, scared of the media power that the Jews possess. But things are changing.”

The Daily Stormer has frequently promoted NRA membership drives, including repeatedly linking to an NRA recruitment website and claiming,“The number 1 source of new recruits for the NRA has always been the Daily Stormer.”

In articles posted on the website, Daily Stormer writers implore readers to join the NRA: 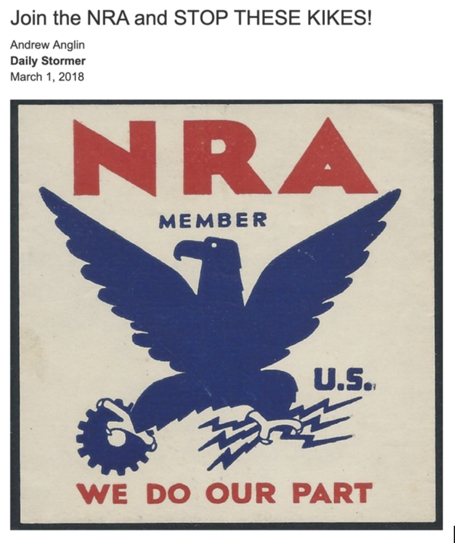 According to The Daily Stormer, “The NRA is the country’s premiere pro-white and anti-Semitic organization. In fact, it is the only right-wing group of any kind in this country to have any success at all in the last 50 years.”

The Daily Stormer clearly sees the NRA as a tool it can use to instigate wide-scale attacks against Jewish people. Here are a few pro-NRA threatening messages the site has posted:

The Daily Stormer also posted a meme featuring NRA spokesperson Dana Loesch to threaten, “Our patience has its limits,” writing, “And guess what kikes? Your outrage machine is broken.” 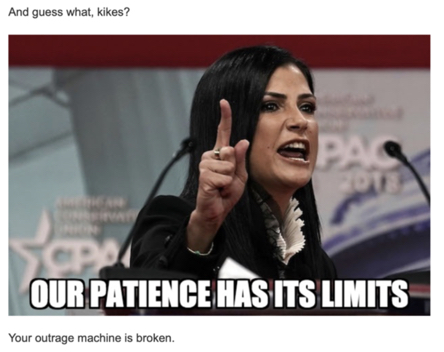 The Daily Stormer is endorsing a plan to take it a step further, and arm the students as well.

Say you’re in class, the teacher is writing something on the board, and a Jew pulls out a gun. The teacher has his back to the class and doesn’t see the Jew make his move – but you’re sitting behind him, and you’ve got a clean shot – why shouldn’t you be allowed to take it?

The Daily Stormer has labeled LaPierre “/ourlad/” and “Reichsmarschall,” the highest military rank in Nazi Germany, and favorably called the NRA leader an “anti-Semitic white nationalist.” In particular, the site likes LaPierre because of a speech he gave after the Parkland school shooting in which he called opponents of the NRA “European-style socialists,” which, as The Daily Stormer explained, “everyone acknowledges, means ‘Jews’” or “the gun-grabbing kikes.” The Daily Stormer has favorably mentioned that LaPierre “gave a speech calling out the Jews as gun grabbers,” noted that LaPierre “purposefully pushed for an open war with the Jews,” and written that “he literally put out a Jew list, showing that everyone who disagrees with gun rights is a Jew. And he has to know, too. There is no way you list off a dozen Jews – and not a single goy – without noticing that pattern.” Indeed, LaPierre has frequently targeted Jews during his public remarks.

In May, The Daily Stormer heaped praise on North after he became president of the NRA. An article on the neo-Nazi website argued, “The NRA just made a great pick for their new head. Great, great pick.” The website described North’s involvement in the Iran-Contra arms trafficking scandal as a positive, writing, “This is one guy who definitely does not give a single fuck about having a license to buy and sell weapons. For those who don’t know – the Iran-Contra ‘scandal’ was a program of selling weapons to Iran and using the money from that to fund communist-killing death squads in Latin America.” The article speculated that as president of the NRA, North could help arm Iran with nuclear, chemical, and biological weapons that the country could then use against Israel.

The Daily Stormer also has a lot of praise for NRA national spokesperson Loesch, whom it calls “Princess Dana.” The site praised the gun group for not firing Loesch for her recently resurfaced 2010 tweet that said, “I bet Rick Sanchez was fired by a Jew.” (Sanchez was fired from CNN after he made anti-Semitic remarks about comedian Jon Stewart.) Loesch said that her tweet was meant to be an appeal to poetic justice. The Daily Stormer wrote that instead of firing her, the NRA “doubled-down by giving her a show about how she is going to destroy the Jews,” referencing promotional material for her NRATV show Relentless in which Loesch has threatened members of the media that their “time is running out.”

The Daily Stormer has also praised Chuck Holton, a correspondent for the NRA’s media operation NRATV. During a July 2017 appearance on NRATV, Holton suggested that Black people were poised to commit mass rape and murder against white people while referencing “what’s happening in South Africa.” In response, The Daily Stormer wrote, “Holy shit! The NRA cited the White Genocide in South Africa as a warning to America!” Holton has a lengthy history of promoting white nationalism and making racist comments, and he has repeatedly pushed the conspiracy theory that Jewish philanthropist George Soros is behind the migrant caravan traveling through Central America and Mexico -- a remarkably similar theory to the one that inspired a gunman to carry out an anti-Semitic massacre at a Pittsburgh, PA, synagogue in October. The site is aware of NRATV and has disturbingly noted, “A NRA tv channel calling out ‘socialist corruption’ 24/7 would be the best thing ever, especially considering that all of these ‘European-style socialists’ are actually Jews.” (Three months after that Daily Stormer article was published and a day after an ISIS terror attack in Manchester, U.K., Holton argued on NRATV that “this wave of violence that we’re seeing across Europe is a symptom of the broader problem of multiculturalism and socialism.”)

The Daily Stormer also lauded NRA board member Ted Nugent for sharing an anti-Semitic meme on Facebook without repercussions from the NRA, writing, “I’ve gotta give it to Ted. I expected an apology within hours. Instead he is just straight trolling these Jews. It’s fantastic.” In February, a Daily Stormer article defending the NRA as a friendly home for anti-Semites brought up the incident: “Remember another NRA spokesperson, Ted Nugent, posted that one meme a couple years ago… So, the NRA knows and the Jews know the NRA knows, and both sides want to escalate that.”

The NRA’s recent adoption of more extreme messaging tactics is not lost on The Daily Stormer. As the neo-Nazis who run the website cheered in a March article, “The NRA is done with euphemisms.”