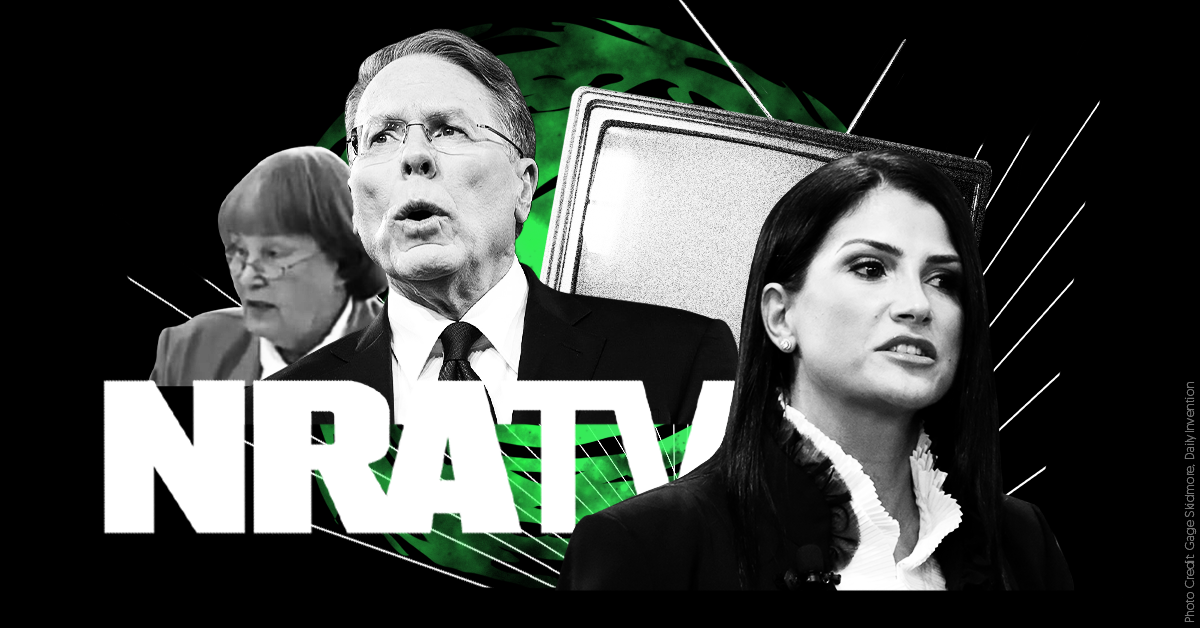 Late Tuesday night, news broke that the National Rifle Association had canceled its media operation NRATV as it ended its relationship with Ackerman McQueen, the ad firm that the NRA had contracted to lead its messaging efforts over the last four decades.

While it might seem unusual to contract work of that kind to an outside business, the two entities had become so enmeshed over the years that it was hard to see where one started and the other ended. (See: the revolving-door hiring practices between the NRA and Ackerman and a recent statement from Ackerman that argued that it was the best entity -- even more so that NRA leadership -- to advance the NRA’s agenda)

Despite this close relationship, a division formed between the two organizations. In March, The New York Times reported that NRA leadership -- including CEO and Executive Vice President Wayne LaPierre and current board member and former President Marion Hammer -- had become uncomfortable with NRATV’s messaging, which often deviated from pro-gun broadcasts to cover other right-wing interest stories. In particular, LaPierre and other NRA leaders expressed discomfort about a widely reviled NRATV segment hosted by Ackerman McQueen employee and NRA spokesperson Dana Loesch -- first reported on by Media Matters -- that depicted children’s show character Thomas the Tank Engine in a Ku Klux Klan robe in a ham-handed attempt to criticize the concept of diversity.

Condemnations of extremism from LaPierre and Hammer were a curious development. LaPierre was widely condemned and ridiculed for his racist and fabricated claims about looting following Hurricane Sandy, and his recent speeches have received adulation from neo-Nazis for his targeting of prominent Jews who favor more gun regulation. Back in 2013, when NRATV was called NRA News, Hammer had drawn the derision of Jon Stewart’s The Daily Show for saying during an NRA News broadcast that an assault weapons ban was the equivalent of Jim Crow racial discrimination. It’s also important to note that LaPierre and other NRA leaders have time and time again stood by longtime board member Ted Nugent, a man who has been credibly accused of child molestation, who is a racist and anti-Semite, and who has said then-President Barack Obama and then-Secretary of State Hillary Clinton should be hanged and that Democrats should be shot on sight. Still, something about the extremism broadcast by NRATV on a daily basis must have bothered them.

Following publicly aired concerns from LaPierre and other leadership, the NRA then requested metrics data from Ackerman and other information about NRATV. A lawsuit filed in April by the NRA against Ackerman alleges that the ad firm rebuffed those requests. (The NRA had been paying Ackerman upwards of $40 million a year to handle its messaging in recent years.) So began increasingly public infighting and legal maneuvering between LaPierre and his supporters -- which included an outside law firm the NRA allegedly pays almost $100,000 a day -- and Ackerman and its supporters. The Ackerman faction most notably featured now-former NRA President Oliver North, who remained an Ackerman employee even following his ouster as president, and other NRA leaders, allegedly including the NRA’s second-in-command Chris Cox, who until recently led the NRA’s lobbying efforts prior to his suspension over claims that he was part of a plot to overthrow LaPierre. (Following the shuttering of NRATV, it was reported on June 26 that Cox resigned.)

Perhaps the fall of NRATV could be attributed to the NRA’s desire to fire up and raise money from its shrinking number of hardcore supporters through more and more inflammatory messaging. NRATV’s predecessor, NRA News, was also created by Ackerman and launched in 2004. Before it became NRATV in 2016 -- a move that significantly expanded its programming and staff -- NRA News’ content could be mostly described as a torrent of misinformation about gun violence and policy, such as the endless repetition of the false NRA talking point that more gun availability in the U.S. makes us all safer. At the time, the NRA’s extremism was typically found in what LaPierre might say during a speech at the annual Conservative Political Action Conference, or what an NRA leader like Nugent would put on social media or write in an op-ed. (The project did have a handful of its own extreme moments, such as when an Ackerman executive defended his decision to shoot an elephant in the face by comparing his critics to Hitler during an NRA News episode and was subsequently fired from his NRA-sponsored NBC Sports show as a result of Media Matters’ reporting on those comments.)

NRATV -- a 24/7 online broadcast that featured more live programming compared to NRA News -- was different. In one if its first broadcasts following the switch, in October 2016, NRATV offered a vociferous defense of sexual assault allegations against then-Republican presidential candidate Donald Trump. Although it wasn't related to gun issues, NRATV also cited a white nationalist conspiracy theory about South Africa to warn that Black people concerned about police violence in the U.S. were poised to rape and murder white people. NRATV pushed white nationalist talking points about immigration, promoted an anti-Semitic conspiracy theory similar to the one that inspired the Pittsburgh synagogue gunman, and hosted a contributor to a white nationalist magazine as a regular guest. Perhaps NRA leaders like LaPierre -- who, when it came to racism and misogyny, already said the quiet part loud -- perceived that the quiet part was said so loud on NRATV that it became a liability.

In any case, the outcome of this infighting is mostly good news. The infighting, which will continue to play out in court and in the public arena for months or even years, has exposed the ways LaPierre and other NRA leaders have reportedly used membership dues to personally enrich themselves at the expense of ordinary NRA members. The NRA has had to expend significant resources dealing with this infighting, which hampers efforts to attempt to stand in the way of legislation to make us all safer and to support candidates for office who push the NRA’s deadly agenda. NRATV’s hateful 24/7 message will go mute.

The bad news: The NRA will still be able to push hate and extremism on gun policy, although presumably on a smaller scale without its media arm. It was reported that the NRA recently attempted to pitch ad firms to create the next iteration of NRATV, although the firms declined to engage with them. It’s possible the NRA will relaunch NRATV as an in-house product or find an ad firm that would do its bidding.

We can say good riddance to NRATV for now. But whatever the NRA decides to do next, it's important to know that we will remain vigilant -- the fight is not over.