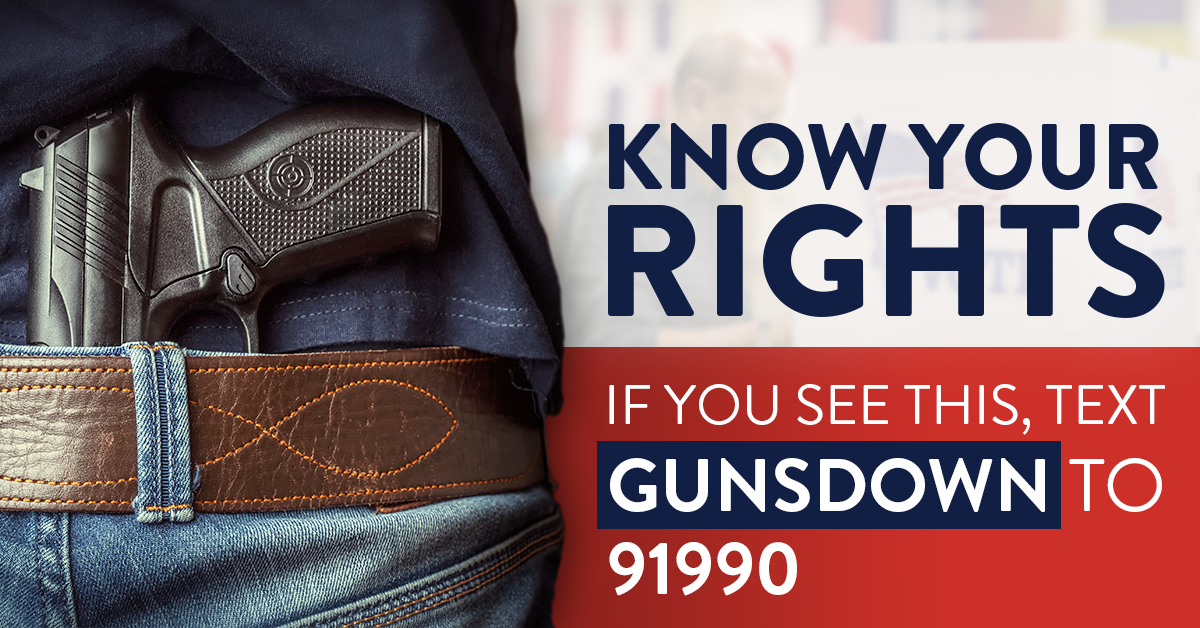 A group called Guns Down America is providing a voter resource that will allow people to report voter intimidation, including intimidation carried out with firearms, occurring at polling sites on Election Day.

The project comes after a wave of attempted bombings of prominent liberals, including former President Barack Obama, and a mass shooting at a Pittsburgh synagogue in the weeks before the 2018 midterm elections. The project’s partners include Media Matters, the Center for American Progress, and the Brady Campaign to Prevent Gun Violence, among others. It was first launched in 2016 following reports that several far-right and white supremacist groups were encouraging their followers to bring guns to polling locations.

Voters who observe intimidation at polling sites are encouraged to text “GUNSDOWN” to 91990. The reports will then be forwarded to the Lawyer’s Committee for Civil Rights, which can take further action.

Although it may come as a surprise, there is no federal law prohibiting the presence of firearms at polling sites. Instead, regulation is left to the states, and many do allow guns to be carried.

There has already been a firearm-related intimidation incident at a polling site in Georgia this election season. WBTV reported that a man was arrested in Charlotte after he threatened a GOP campaign worker at an early voting location:

Officials say when officers arrived on the scene, a black man said he was working at the voting location when he saw the armed man in the parking lot with a camera taking pictures or recording the polling location.

Police say the armed man approached the campaign worker - a retired detective - and began hurling racial slurs, according to a report from CMPD.

The report stated the campaign worker said the armed man threatened to assault him before lifting his shirt and displaying a handgun which was in a holster on his belt.

Police reportedly found a BB gun when the suspect was arrested. An image taken during the incident shows that the assailant was wearing a “Punisher” T-shirt, referring to a comic book series that has been co-opted by the alt right:

Disturbingly, National Rifle Association spokesperson Dana Loesch recently suggested that NRA supporters may need to bring guns to polling locations in order to fend off attacks from “anti-gun progressives.” During the October 23 broadcast of her NRATV show Relentless, Loesch attacked the Guns Down at the Polls project and falsely claimed that its goal is “intimidating law-abiding gun owners legally carrying their firearms by potentially sending the police after people who are doing nothing more than exercising their constitutionally protected rights.” Loesch then called the project “a moderate, soft form of swatting,” a reference to an intimidation tactic involving false 911 calls.

Loesch went on to say, “If God forbid some unhinged maniac with an illegally possessed firearm were to show up at a polling location, something tells me a lot of people would be grateful that one of those law-abiding gun owners was there.”

Leading up to the election, a major conservative messaging effort has argued -- without evidence -- that mobs of Democrats are planning to kill conservatives. The NRA has also been involved in this effort, with its media operation NRATV misrepresenting peaceful protests against the nomination of Brett Kavanaugh to the Supreme Court as violent.

Permissive laws that allow firearms -- often including assault weapons -- to be openly carried in public have emboldened the far right to bring firearms to events where people are exercising their First Amendment rights. There were multiple instances of counterprotesters bringing firearms to the nationwide March for Our Lives gun safety rallies early in 2018. After a May school shooting at Santa Fe High School in Texas, an armed man showed up outside the school to protest gun rights. And in October, the Portland Police Bureau acknowledged that, as The Portland Mercury reported, “Members of Patriot Prayer, a group of right-wing provocateurs from Vancouver, brought a cache of loaded firearms to the top of a parking garage in downtown Portland prior to the group's August 4th protest.”

Guns Down at the Polls aims to counter people who think they can intimidate others and stop them from exercising their voting rights.