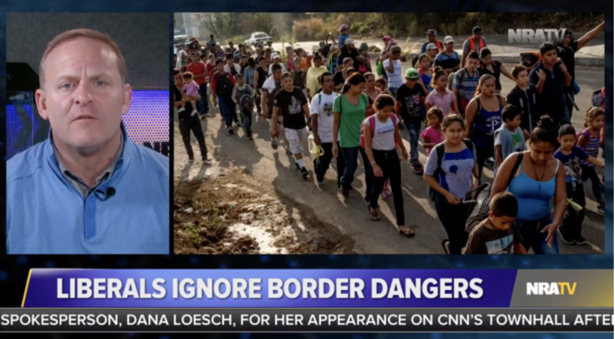 More than half of the live news updates from the National Rifle Association’s media operation, NRATV, fearmongered about undocumented immigrants during the recent government shutdown, which was caused by President Donald Trump’s demand that Congress fund a wall on the U.S.-Mexico border.

During the 35-day shutdown, which ended on January 25, NRATV broadcast 95 segments on its news program Stinchfield. The show, hosted by conservative radio host Grant Stinchfield, consists of 10- to 20-minute hourly updates on weekdays between 9 a.m. and 1 p.m. EST. According to a Media Matters review, 54 of the segments aired during the shutdown fearmongered about undocumented immigrants to agitate for Trump’s fantastical and racist border wall proposal. In three instances, NRATV invited Michael Cutler, a frequent contributor to a white nationalist publication, on to the outlet to advocate for Trump’s wall. Additionally, NRATV correspondent Chuck Holton pushed explicitly white nationalist talking points during one of his appearances.

While it may seem odd that an outlet dedicated to gun-related issues would devote so much time to pushing for Trump’s wall, NRATV is actually best understood as a pro-Trump propaganda network with an explicit aim of promoting whatever his agenda happens to be that day. (In once instance, Stinchfield did connect immigration to the NRA’s goal of loosening concealed carry laws nationwide, saying we should do so because of “the issues we face with immigration and crime.”)

The truth about NRATV and public safety 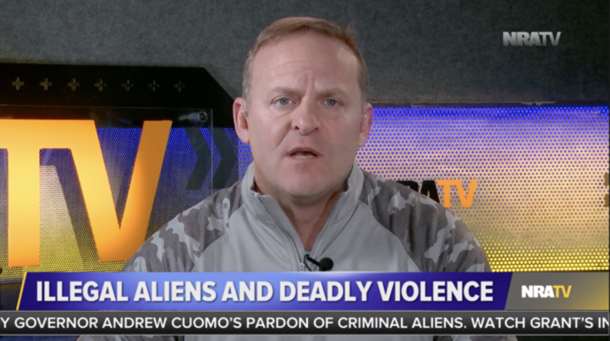 NRATV’s scapegoating of undocumented immigrants for problems in the U.S. began on December 28 -- the first day that the network broadcast Stinchfield after the partial government shutdown began. Throughout his broadcasts that day, Stinchfield repeatedly raised the murder of California police officer Ronil Singh by an undocumented immigrant to create the false perception that undocumented immigrants often pose a public safety threat to those in the U.S. Falsely claiming that Trump’s wall proposal would “stop the large majority of those sneaking in today,” Stinchfield said, “We are tired and fed up of seeing innocent people slaughtered at the hands of illegal immigrants,” and added, “It is time now to stand firm with President Trump. Let’s build this wall.” During another update later that day, NRATV correspondent Chuck Holton connected without evidence the murder of a Swiss man in Acapulco, Mexico, to a migrant caravan poised to enter Mexico from Central America. (Speaking of the migrants in the caravan, Holton also added, “You can bet that these are not doctors and accountants coming along. These are unskilled laborers coming to a place that’s absolutely chock full already of unskilled laborers. So you can imagine how that’s going to go.”) 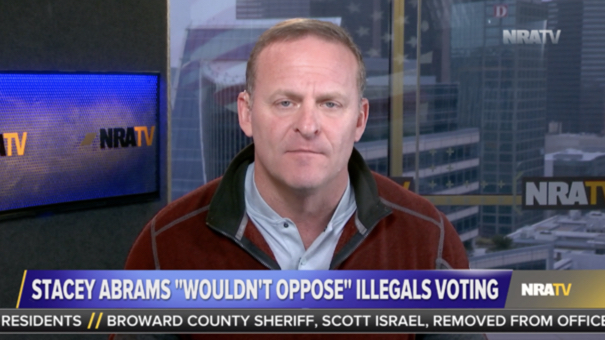 Throughout shutdown broadcasts, Stinchfield repeatedly slurred and dehumanized undocumented immigrants with the term “illegals.” Some examples: 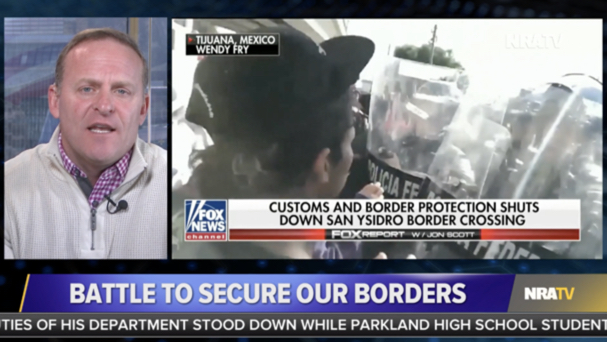 Stinchfield made up an outrageous statistic to push for the wall; during the January 8 and January 9 broadcasts, he claimed without evidence that undocumented immigrants have killed “tens of thousands” of people in the U.S. in recent years.

Making matters worse, Stinchfield’s claims about immigration were often not off the cuff -- instead they were scripted and packaged, with the same talking points appearing during multiple Stinchfield updates. Some examples: 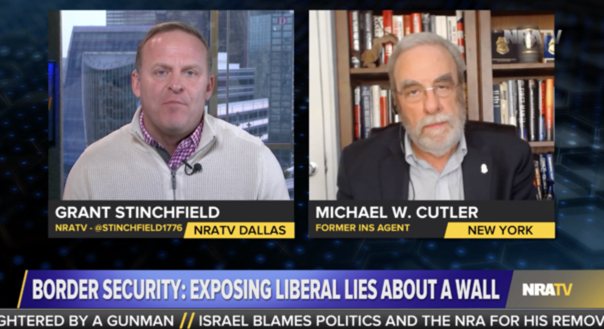 NRATV hosted Michael Cutler during broadcasts on December 28, January 3, and January 21, identifying him in on-screen graphics as a “former INS agent.” Cutler, who is also a former fellow at the nativist Center for Immigration Studies, is a frequent contributor to white nationalist journal The Social Contract. The Southern Poverty Law Center notes that the publication “routinely publishes race-baiting articles penned by white nationalists” and that it was founded “by John Tanton, the racist founder and principal ideologue of the modern nativist movement.” According to SPLC, The Social Contract Press “puts an academic veneer of legitimacy over what are essentially racist arguments about the inferiority of today's immigrants.”

A search of the journal’s website returns 21 articles authored by Cutler, including six articles published since 2017. Echoing Stinchfield, Cutler emphasized undocumented immigrant criminality during his appearances on the show. During his January 21 appearance, Cutler claimed that Democrats are betraying “national security and public safety,” and Stinchfield closed the segment by saying that Cutler “has a long history of defending our nation’s borders.” 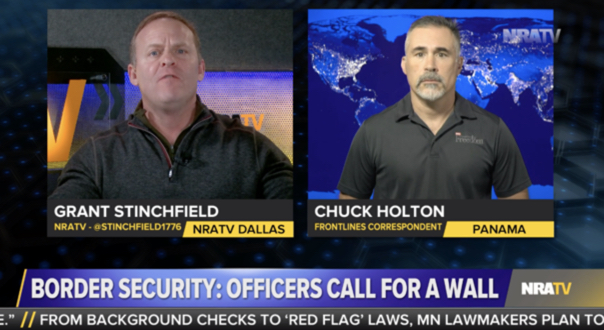 Chuck Holton, an NRATV correspondent with a history of making racist remarks and promoting white nationalism, pushed a conspiratorial white nationalist talking point during a January 4 appearance. Holton alleged that Democrats are “trying to import a new populace that will vote for them by offering them all these free benefits” via the southern border from “Third World” countries such as India, Cameroon, Pakistan, Nepal, Afghanistan, and those “all over Africa.” Describing immigration as “trying to import a new populace” from “the Third World” is a common tactic advanced by white nationalist publications including VDare and American Renaissance.

While speaking about immigration on NRATV before the shutdown, Holton repeatedly pushed the conspiracy theory that philanthropist George Soros was behind a migrant caravan -- a remarkably similar conspiracy theory to the one that motivated a gunman who carried out a mass shooting in a Pittsburgh, PA, synagogue in October. He has also said that the migrant caravan is “an invasion under the guise of migration.” 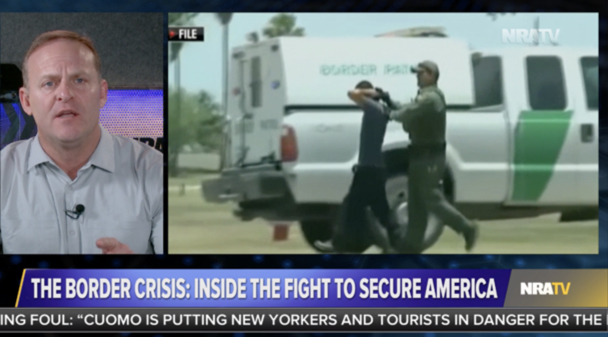 In several other cases, Stinchfield and Holton took cues from the Trump administration to raise the prospect of undocumented immigrant terrorists. For example, citing a terrorist attack in Africa and incidents in the U.S., Holton said during the January 16 broadcast of Stinchfield, “This is yet another reason why we need that wall on the southern border.” While providing no examples of terrorists crossing the southern border, Stinchfield said during a January 18 update, “Look at what happens when terrorists make their way into this country. If you want to secure the border, you do it, you build a wall.” According to the libertarian Cato Institute, no U.S. terror attack has ever been carried out by someone who crossed the border illegally.

The truth about NRATV and public safety 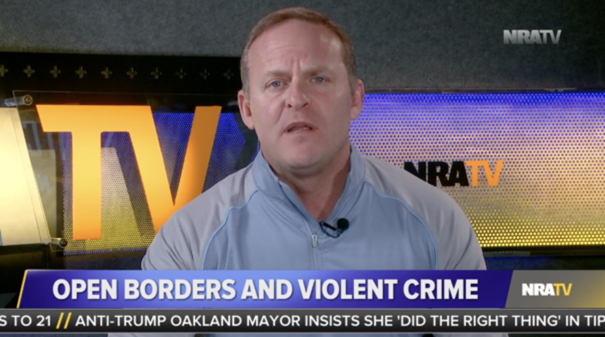 The sickening irony of NRATV’s obsession with the supposed criminality of undocumented immigrants is that if the outlet was truly concerned about public safety and murder, it would devote its time to reporting that high gun availability and lax firearm laws are the driving factors behind the U.S.’s shockingly high homicide rate, with the vast majority of murders committed by people born in the U.S. But it doesn’t. The NRA, of course, opposes any meaningful action on gun laws to stem that epidemic of violence.