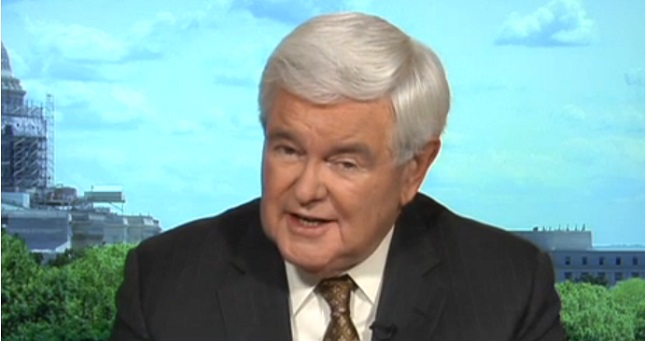 Newt Gingrich has been helping the for-profit college industry -- both behind the scenes and through his Fox News platform -- in its attempt to dismantle safeguards designed to protect students from being saddled with debt and targeted with unsavory practices.

Gingrich’s efforts include FoxNews.com op-eds which, until recently, pushed for-profit college talking points without any disclosure that he works as a consultant for that industry.

President Barack Obama led a crackdown on fraud and abusive practices within the for-profit college industry. For instance, the administration released regulations to let students “apply to have their federal loans discharged if their college used illegal and deceptive tactics to persuade them to borrow money to attend,” as The Washington Post noted. It also made changes to the “gainful employment” rule, which, according to the Post, would have effectively “shut down for-profit programs that repeatedly fail to show, through certain measures, that graduates are earning enough to pay down the loans taken out to attend those programs.”

Those reform measures were opposed by the for-profit college industry and its main lobbying organization, Career Education Colleges and Universities (CECU). The group states that it represents “more than 600 educational institutions” and “advocates for policies that seek to reduce the regulatory burden of all institutions of higher education.”

Under President Donald Trump’s administration and Department of Education Secretary Betsy DeVos' supervision, the for-profit industry is making a comeback. Politico recently reported that “for-profit colleges are winning their battle to dismantle Obama-era restrictions as Education Secretary Betsy DeVos rolls back regulations, grants reprieves to schools at risk of losing their federal funding and stocks her agency with industry insiders.”

The publication reported that as part of the industry’s efforts, CECU hired Gingrich as a consultant “to make connections inside the Trump world.” CECU is headed by former Rep. Steve Gunderson (R-WI), who is friends with Gingrich and had hired Callista Gingrich -- now nominated as the U.S. ambassador to the Holy See -- as a staffer in his House office. (Callista Gingrich also consulted for CECU, according to her financial disclosure forms.)

Newt Gingrich has not only been doing the lobbying group’s work behind the scenes -- he’s also been using his position as a Fox News contributor to push for-profit college talking points, writing three FoxNews.com op-eds about the issue since he was hired by CECU.

Gingrich wrote an August 5, 2016, op-ed in which he criticized the Democratic Party platform for imposing “special regulations targeting private sector colleges, universities and career education programs” and criticized the Obama administration for purportedly punishing “good, law abiding institutions that focus on skills training and career education.” That op-ed included a note that Gingrich “is an advisor to Career Education Colleges and Universities.”

But two subsequent op-eds did not initially include any disclosure that Gingrich works for CECU.

Gingrich wrote an op-ed in December in which he criticized the Department of Education for having “forced almost 900 private sector campuses into closure” in the past four years. The op-ed quoted “a recent analysis of Department of Education data by Career Education Colleges and Universities” to show that private sector schools are “critical” to certain industries. He also wrote that “the Trump administration should announce that it intends to make the disastrous Gainful Employment Rule open for review.” (The administration has since halted the rule.)

He wrote another op-ed in March criticizing the Obama administration for having purportedly “made a mission out of demonizing private for-profit colleges and universities. … Not only will these Obama-led efforts hurt Americans, but without these colleges and career training programs, our ability to fill the jobs President Trump is working to bring to this county will be severely hindered.”

Media Matters sent requests for comment to Fox News about the lack of disclosures. Fox did not respond but subsequently added editor’s notes about Gingrich’s conflict of interest.

Gingrich has a history of problems with transparency and ethics ranging from his time as House speaker -- when, as NPR noted, “he was the first speaker of the House, ever, to be punished by the House for ethics violations” -- to his media career at CNN and Fox News.

FoxNews.com recently initially failed to disclose another conflict of interest with op-ed writer James J. Fotis, who took to the website to defend recently pardoned racist Sheriff Joe Arpaio. That piece initially did not note that Fotis is “paid to run Arpaio's legal defense charity.” As the Post’s Erik Wemple noted about that op-ed, “When it comes to such disclosures, the more information, the better."