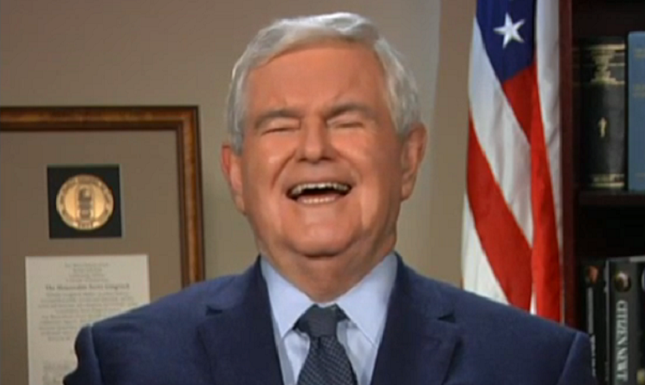 Fox Business allowed Newt Gingrich to attack the Consumer Financial Protection Bureau (CFPB) without disclosing that he’s been paid by a group trying to kill the government agency.

During a November 28 appearance on Mornings with Maria, Gingrich discussed the ongoing leadership conflict at the agency and complained that the CFPB has been “a playground for [Sen.] Elizabeth Warren [D-MA] and her left-wing anti-capitalist, anti-free enterprise friends. It was a very abusive agency, it's an agency which did enormous damage.”

The business network did not disclose that the Fox News contributor has worked as a paid adviser for the US Consumer Coalition, a secretive group that is attempting to dismantle the CFPB. He’s also worked as a paid adviser to Wise Public Affairs, a public relations firm whose clients include the US Consumer Coalition. Gingrich acknowledged his ties to both groups during a December 2015 congressional hearing. He co-authored an October 2016 Medium post attacking the CFPB with Brian Wise, who heads the Consumer Coalition and Wise Public Affairs. Both groups did not return requests for clarification about their current financial relationship with Gingrich.

Gingrich previously hid his anti-CFPB financial connections when he wrote a July 2015 Wall Street Journal op-ed attacking the CFPB and promoting the US Consumer Coalition. The op-ed did not disclose any of his financial ties, simply identifying Gingrich as a former House speaker. Following criticism by Media Matters and The Washington Post's Erik Wemple, the Journal issued an “amplification” that Gingrich is “a paid adviser to Wise Public Affairs, whose clients include the U.S. Consumer Coalition, which opposes some policies of the Consumer Financial Protection Bureau.”

Fox News and Fox Business have a long history of failing to disclose the conflicts of interest of their guests and on-air personalities, including Gingrich. Fox News’ Dana Perino recently failed to disclose that anti-CFPB guest Shannen Coffin has “represented clients affected by and opposed to CFPB regulation,” as noted in his recent Weekly Standard column. Perino didn't note the connection despite quoting from that column during the segment.

UPDATE: Following the publication of this piece, FoxNews.com posted a November 30 op-ed by Gingrich in which he attacked “the dangerously unaccountable Consumer Financial Protection Bureau.” That op-ed also did not include any disclosures about Gingrich's paid anti-CFPB work