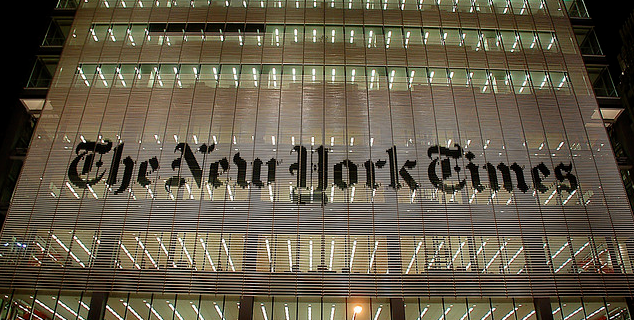 The New York Times drew harsh criticism this weekend for reporter Richard Fausset’s profile of Tony Hovater, a 29-year-old Ohioan described as “the Nazi sympathizer next door” who co-founded the Traditional Worker Party, a group the Southern Poverty Law Center calls “a white nationalist group that advocates for racially pure nations and communities and blames Jews for many of the world’s problems.” Journalists from other outlets criticized the piece for “normaliz[ing] Neo-Nazism,” devoting too much attention to the subject’s banality (his wedding registry and restaurant choices are repeatedly referenced) and not enough to his evil. The Times’ national editor wrote in a response to the feedback that he “regret[ted] the degree to which the piece offended so many readers” but largely defended it as an effort the staff had “agonized over” and one that was forthright about the subject’s bigotry.

But in a separate Times Insider piece, Fausset himself acknowledged the “hole at the heart” of his story: “Why did this man — intelligent, socially adroit and raised middle class amid the relatively well-integrated environments of United States military bases — gravitate toward the furthest extremes of American political discourse?” Fausset wrote that he was unable to answer this question after visiting Ohio to interview Hovater, and spoke to the white supremacist again by phone after an editor flagged the problem with an early draft of the story. After that follow-up conversation failed to resolve the issue, the Times nonetheless published the story. “Even if I had called Mr. Hovater yet again,” Fausset concludes, “I’m not sure it would have answered the question.”

Fausset has inadvertently put his finger on the reason so many journalists viewed his piece as a failure rather than a triumph. There is a persistent assumption undergirding both the story and the reporter’s explanation that the best way to investigate Hovater’s ideology and his pathway to extremism is by asking him about it. An interview can be an important tool for bringing light to radicalism. But absent important context provided by other reportorial methods, reporters may end up providing extremists a platform to spew their hate, or producing a profile with limited news value. By focusing so narrowly on Hovator’s words, the Times missed out on a much richer story.

Right-wing extremists frequently use alternative media platforms like YouTube to push their messages to supporters and would-be converts, providing an invaluable archive for reporters seeking to understand them. In the profile, Fausset briefly mentioned a “podcast conversation” between Hovator and Traditional Worker Party co-founder Matthew Heimbach about their purported recent success in converting “normal people” to their ideology. But that is the piece’s only mention of the content of the podcast, a curious gap. Angus Johnson, a professor at City University of New York, reviewed two episodes of the show after the Times story’s publication and came away with several conclusions he described as missing from the profile, most notably that Hovator and Heimbach are “hoping for and working toward a Nazi takeover of the US.”

Social media provides another way to get insights into the mindset of an extremist, as a dense online ecosystem has played a key role in the rise of the far-right in recent years. But outside of a brief mention of the online message board 4chan (a community frequented by far-right trolls and extremists) and a description of a single Facebook meme Hovator posted, Fausset largely ignores the possibility that the internet played a role in the white nationalist’s radicalization. Buzzfeed’s Charlie Warzel, who writes frequently on the intersection of social media and right-wing extremism, reviewed Hovator’s posts on Twitter, Facebook, and Instagram, and concluded that the influence of the online far-right “can be seen throughout his social media presence.”

When Fausset hit a wall and was unable to report out why Hovator became a white nationalist based on Hovator’s own words, he could have tried to get at the story by interviewing other people around him. “Perhaps Hovater himself wasn’t the best authority on his own radicalization,” The Washington Post’s Erik Wemple noted yesterday. “Perhaps family members would have been more forthcoming on the matter, or former classmates, neighbors — someone else.” Wemple pointed to several recent profiles that demonstrate the importance of consulting multiple sources in reporting out a story like this.

Given the complex, interconnected web of white nationalist activity, reporters who don’t regularly deal with the subject would be wise to consult experts who spend large portions of their time focusing on it. But the profile’s sole reference to a specialist was about the relative numbers of Traditionalist Worker Party members and those who identify as “alt-right.”

It’s possible that the Times did all this legwork and simply decided that a deeper look at Hovator’s past words, deeds, and associates was not worth including. If so, that was a mistake, and the Times’ readers are the poorer for it.

To be fair to the Times, the paper is not the only major media outlet to draw opprobrium for faulty coverage of the radical right -- or even the only one to do so over the Thanksgiving holiday weekend. NPR issued a correction on Saturday to a report on right-wing troll Mike Cernovich. The report had included the false claim that Cernovich had never specifically mentioned the name of the Washington, D.C., pizzeria that he and other conspiracy theorists had falsely suggested was the site of a child trafficking ring backed by associates of Bill and Hillary Clinton. The correction followed criticism from Vic Berger, a video editor and satirist who diligently follows Cernovich’s actions and who had posted a video on Twitter showing Cernovich mentioning the pizzeria by name. CBS and NBC have also produced similarly flawed reports on far-right figures this year.

The far-right is a complicated subject, and reporters who dip into that world can quickly get lost or spun. The web of players is sizable, their affiliations and grudges complex and opaque, the sheer volume of content they produce staggering. Adding to the problem, “alt-right” and white nationalist figures engage in constant, complex disinformation and trolling campaigns that can leave reporters dizzy.

One solution to this problem is assigning reporters beats that include dedicated coverage of the far-right. That dedicated focus will give them the time to more fully examine and understand the complex ecosystem, allowing them to develop expertise.

But failing that, reporters working stories on this beat would be wise to take Wemple’s advice: “The best way to avoid normalizing white nationalists is to report about their deeds, their friends, their families and their beliefs, and to not give up after an unsatisfactory phone call.”