Before there was any evidence of who was responsible for the terrorist bombing and shooting in Norway, mainstream media outlets rushed to finger Muslims and Muslim groups as potential perpetrators and listed grievances that radical Muslims had against the country. Norwegian officials have since said that a non-Muslim was responsible for the terrorist acts.

Right-Wing Media Immediately Blamed Muslims For Norway Attacks. With no evidence, the conservative media blamed the attacks on radical Islam. Those who participated in the rush to judgment included Jennifer Rubin of the Washington Post, CNN contributor Erick Erickson, and Andrew Breitbart's BigPeace.com. The Breitbart website surmised that the attacks could have meant that Norway's “big Muslim problem” had “just blown up in its face.” Erickson wrote via Twitter: “Terrorist bombing in Oslo. I bet you it was not Lutherans who did it.” Pamela Geller posted a headline on her blog asking if there was “Jihad in Norway.” [Media Matters 7/24/11, Atlas Shrugs, 7/22/11]

CNN's Cruickshank Reported That “Norway Has Been In Al Qaeda's Crosshairs,” Ignoring Other Explanations For Attack. From the July 22 edition of CNN Newsroom:

BALDWIN: Our terrorism analyst Paul Cruickshank is standing. He joins me from London. And, Paul, I just want to hit you right up with this. Why Norway? Why would terrorists target the Scandinavian country?

PAUL CRUICKSHANK, CNN TERRORISM ANALYST: Well, actually, Norway has been in al Qaeda's crosshairs for quite some time.

In 2003, Ayman al-Zawahiri, the now leader of al Qaeda, issued a threat against Norway, singled Norway out. Norway is in Afghanistan, it's part of NATO. But also last year a newspaper in Norway published controversial images of the Prophet Mohammed, republished those images which had been originally published in a Danish newspaper some years back. So many reasons why a group like al Qaeda or another jihadist group may want to come after a country like Norway, Brooke.

CRUICKSHANK: I think we're talking about a relatively high level of sophistication here. The carnage recalls the scenes in 1998 of the U.S. African embassies that were targeted by al Qaeda. This was a huge bomb that was exploded today. It seems to have killed, unfortunately, a significant amount of people.

Also, coordinated attacks it seems today where they may have been trying to take out some of the political leadership of Norway as well. So it bears all the hallmarks of the al Qaeda terrorist organization at the moment. But we don't know at this point who was responsible, Brooke.

BALDWIN: You know, after Osama bin Laden's death, there were Islamic extremists who came forward and said there will be retaliation, there will be revenge, we will be coming back. Might this be a manifestation of that threat?

CRUICKSHANK: It's possibly that this is in some way related to that. And in Norway, in recent months, there's been increased terrorist threat activity chatter that Norwegian counterterrorism services have been monitoring. [CNN, CNN Newsroom, 7/22/11]

CNN's Elbagir: “Many Of Those On The Extremist Fringes” Believe Attack Was Revenge For Bin Laden's Death. From the July 22 edition of CNN Newsroom:

KAYE: And any claims yet of responsibility in terms of the bombing?

ELBAGIR: We haven't had any serious claims, but what we are seeing on a lot of the pro-jihad forums is a lot of celebration, a lot of jubilation. They said that the mujahedeen, the Islamic extremists promised revenge after Osama bin Laden's death and many of those on the extremist fringes of the Islamic movement believe that this now that revenge. In fact, one just posted that Europe, there is more coming. Many in the intelligence community that I've been speaking to say that their concern is that if it is an Islamic extremist group that has carried out the attack -- that this was done because they believe that Norway was a soft target. You've had several al Qaeda franchises, like al Qaeda in Yemen attempting to hit out Europe and the United States. And they believe that they might have tried to hit Norway because they did not think that their security was really as strong as it could have been. [CNN, CNN Newsroom, 7/22/11]

Washington Post Repeated “Speculation” That “Kurdish Militant Group” Was Responsible For Attack. From a July 22 blog post on WashingtonPost.com:

In the immediate aftermath of the attack in Oslo, speculation about the party that might be responsible has centered on Ansar al-Islam, a Kurdish militant group that has been tied by U.S. officials to al-Qaeda and that carried out attacks on American troops and civilians in Iraq at the height of the war there.

Norway's contingent in Afghanistan, or even its “cartoon crisis” of 2006, could make the country a target for any number of terrorist groups, asthe Atlantic has noted.

Still, Ansar -- a Sunni group that has been formally designated a terrorist organization by the United States -- could make good sense if for no other reason than the timing of the attack.

As J.M. Berger notes over at Foreign Policy, the group's founder, known as Mullah Krekar, was arrested just last week for allegedly threatening Norwegian politicians with death if he were deported from the country. [WashingtonPost.com, 7/22/11]

Reuters Responded To Attacks With List Of “Islamist Militant Attacks In Europe.” Shortly after the attacks, Reuters posted “Factbox” on its website listing “Islamist militant attacks in Europe.” [Reuters.com, 7/22/11]

There were initial claims of responsibility for the attacks from Ansar al-Jihad al-Alami (the Helpers of the Global Jihad), according to Will McCants a terrorism analyst cited by The New York Times. But it could not be confirmed.

Whoever was behind the attacks, Islamic fundamentalist internet forums were yesterday reported to have described the Oslo blast as “cheering news”. One user was quoted as saying: “Get your troops out of Afghanistan or you will see blood on the streets.” Since the publication of cartoons of the prophet Mohammed in a Danish newspaper five years ago, al-Qa'ida has declared its intention to carry out an act of revenge on a Scandinavian country. [Independent.co.uk, 7/23/11] 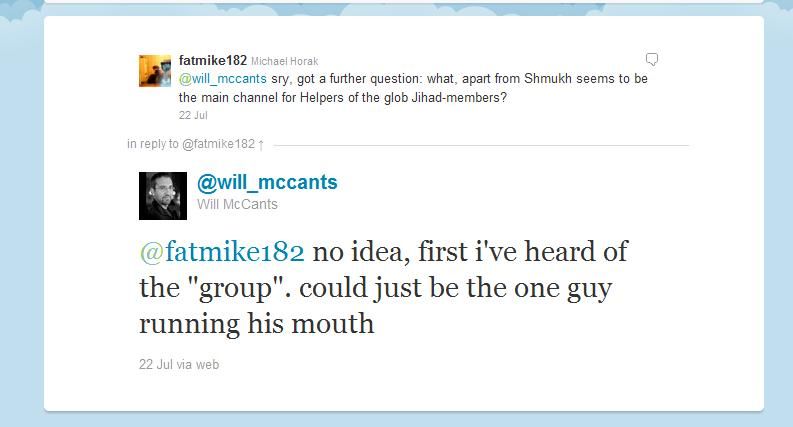 Initial reports focused on the possibility of Islamic militants, in particular Ansar al-Jihad al-Alami, or Helpers of the Global Jihad, cited by some analysts as claiming responsibility for the attacks. American officials said the group was previously unknown and might not even exist.

There was ample reason for concern that terrorists might be responsible. In 2004 and again in 2008, the No. 2 leader of Al Qaeda, Ayman al-Zawahri, who took over after the death of Osama bin Laden, threatened Norway because of its support of the American-led NATO military operation in Afghanistan. [The New York Times, 7/22/11]

CNN Reported That “Chatter” Provided Clues Regarding The Motive For An Al Qaeda Attack On Norway. From CNN.com:

CNN terrorism analyst Paul Cruickshank said it was far too early to draw any conclusions on whether it was terrorism and who would carry it out. But, he said, by looking at the extent of the damage, it was plain to see the hallmarks of a major attack.

Cruickshank said that in recent months, there had been increased “chatter” about Norway, which had been investigating militants suspected of being linked to al Qaeda.

Norway also drew the ire of al Qaeda for publishing the controversial political cartoons of the Prophet Mohammed that appeared in a Danish newspaper and sparked outrage in the militant Islamic community.

The Scandinavian country also plays a part in NATO's operation in Afghanistan, and now, in Libya. [CNN.com, 7/22/11]

Update at 10:14 a.m. ET: Although the source of the blast is unclear, Al-Jazeera TV notes that Norwegian prosecutors on Tuesday filed a terrorism charge against Mullah Krekar, founder of the Kurdish Islamist group Ansar al-Islam. Mullah Krekar is accused of threatening a former minister, Erna Solberg, with death, Al-Jazeera says. [USAToday.com, 7/22/11]

BOLTON: Well, this is a very un-Norwegian act, so the odds of it coming from someone other than a native Norwegian, I think, are extremely high. And it is a classic terrorist effort. And it's gonna have a dramatic impact on Norway. There have been speculations because the famous Mohammed cartoons were published there, because of this cleric who's under deportation proceedings. So without anyone taking responsibility for it or any definitive evidence, we can't say for sure, but it sure looks like Islamic terrorism. [Fox News, America Live, 7/22/11]

After Acknowledging Lack Of Evidence, WSJ Still Speculated That Attack Was “The Work Of Islamists.” From a July 23 editorial:

Norway is not, in fact, a neutral country. Though it isn't a member of the European Union, it is a founding member of NATO. Al Qaeda's Ayman al-Zawahiri has repeatedly singled out Norway in his videotaped messages for "[participating] in the war against the Muslims." Theories abound about the specific nature of Oslo's “crime”: the 400 troops it currently deploys to Afghanistan; its house arrest of Mullah Krekar, a founder of the Kurdish terrorist group Ansar al-Islam; the republication of the Danish cartoons in a small Norwegian paper.

Perhaps all this is at work. Or perhaps not: At our first deadline reports indicated that the attacks were the work of a jihadist group. Later in the evening evidence emerged that a suspect in the shooting attack on a youth camp was an ethnic Norwegian with no previously known ties to Islamist groups. Coordinated terrorist attacks are an al Qaeda signature. But copycats with different agendas are surely capable of duplicating its methods.

Whatever the case, the attacks demonstrate that Norway is no more immune than any other country to such atrocities, no matter what its foreign or domestic policies may be. If this does prove to be the work of Islamists, it will be noted that neither Norway's opposition to the war in Iraq nor its considerable financial and political support for the Palestinians spared it from attack. [The Wall Street Journal, 7/23/11]