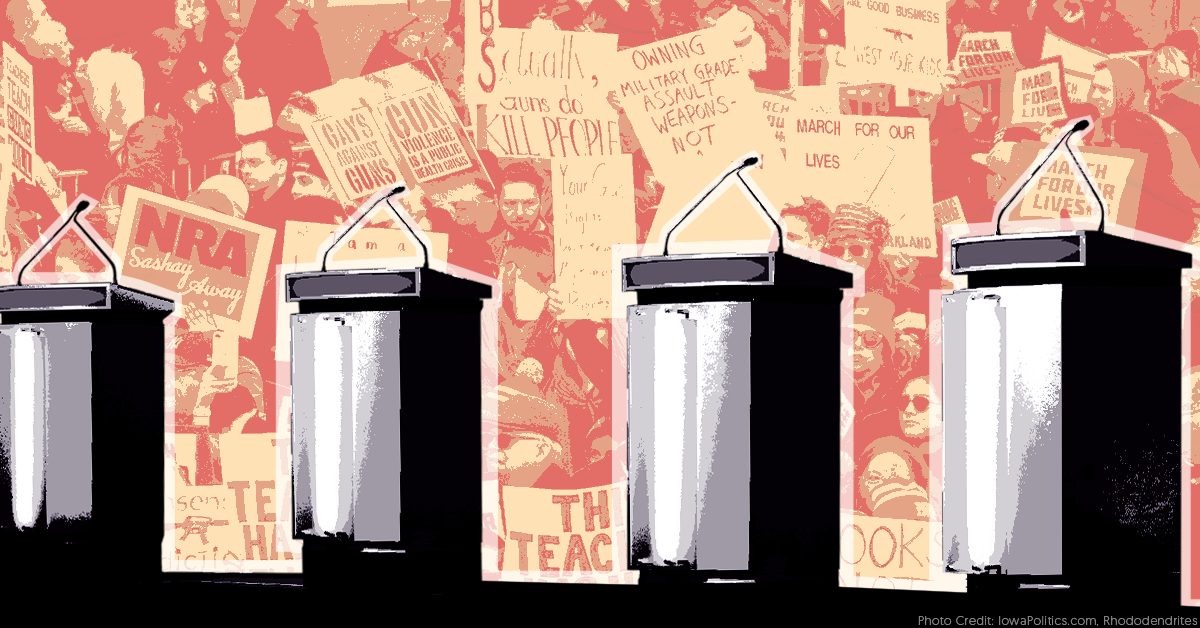 With the 2020 Democratic presidential debates in full swing and the National Rifle Association weakened by financial scandals, gun violence prevention experts want moderators of upcoming debates to ask candidates fact-based questions about firearm policy rather than focus on “irrelevant” and “sensationalist” ones.

In this election cycle, moderator Chuck Todd did bring up gun safety during the first Democratic presidential primary debate on June 26, but it served as an example of how not to question the candidates about their platforms. While asking former Rep. Beto O’Rourke (D-TX) a question, the NBC host adopted a right-wing talking point that strengthening gun laws would require confiscation of people’s privately owned firearms.

CHUCK TODD (MODERATOR): Congressman O’Rourke, you’re a Texan who’s campaigned -- you campaigned all over the state in 2018, in the most conservative parts there. What do you tell a gun owner who has-- may agree with you on everything else, OK, but says, “You know what, the Democrats, if I vote for them in there, they’re going to take my gun away. And even though I agree with you on all these other issues” -- how do you have that conversation?

Todd’s line of questioning was ripped straight from the NRA’s playbook: For years, the pro-gun organization has been fearmongering that any type of gun safety legislation -- from universal background checks to assault weapons bans to federal research on gun violence -- is a “slippery slope” that could lead to a national gun registry and ultimately an all-out confiscation of every firearm.

Nearly all of the 2020 Democratic presidential candidates are campaigning on gun violence prevention platforms, and the NRA is on its heels amid multiple allegations of financial mismanagement and questions about how effective the pro-gun organization will be during the general election. Now, debate moderators need to do their jobs and ask candidates about specific gun safety policies -- not conjure up paranoid fears of confiscation that have been stoked by right-wing media for years.

Awo Eni, communications and organizing manager at the Community Justice Action Fund said questions like Todd’s “erase the concerns of those living in black and brown communities impacted by everyday gun violence” and “framed the [gun violence prevention] efforts as ‘taking people’s guns away.’” Instead, Eni asked that moderators, “Do the work of looking at solutions that are already being implemented in the most impacted communities to reduce gun violence.” In the following debates, Eni suggested moderators ask candidates what their plan is “to help reduce violence in cities like Chicago, St. Louis and Baltimore?”

The Rev. Michael McBride, director of Live Free and director of urban strategies for Faith In Action, pointed out that only 5% of gun homicides are a result of mass shootings but receive “the lion’s share [of] attention in the national media.” He said that urban gun violence disproportionately affects Black and brown families and that he would like to see moderators ask how the candidates “would reduce the number of black males being killed every day in this country.”

Kayla Hicks of the Educational Fund to Stop Gun Violence said any debate questions on gun violence need to be “evidence-based” and be inclusive of communities that have been historically underrepresented based on race, ethnicity, socioeconomic status, gender, disability, or religion. Hicks pointed out that homicide is the “leading cause of death for African-American boys and men ages 15 to 34,” and “young Black females ages 15-24 are nearly 7 times more likely than their non-Hispanic White counterparts to be murdered by firearm.” Given those facts, she suggested moderators ask candidates about the “social factors” that are “both the root causes of gun violence and are exacerbated by gun violence” such as “the relationship between gun violence, poverty, and inequality.” Hicks also cautioned that candidates should be asked to explain how they would “ensure that underrepresented groups will not be negatively impacted (including any unintended consequences)” by their approaches.

Parkland parent and gun safety advocate Fred Guttenberg urged moderators to deal with specifics and frame questions around “the reality that we currently have 300,000,000 guns in America … and the reality that some of them will be used” in homicides. He highlighted his work on passing ammunition background checks and said he wants to see moderators ask candidates how they will handle the immunity that firearms manufacturers have from civil liability when their products are used unlawfully.

Justin Lowenthal, national co-chair for the Gun Violence Prevention team with Doctors for America, called Todd’s question “closed-ended” because it “framed the issue into a narrow question requiring a narrow answer that lacked nuance,” instead of allowing the candidate to “expand a bit on multiple aspects of gun violence and multiple policy positions to address them.” Questions on the issue should be framed “through a public health lens,” Lowenthal said, because gun violence creates “death and morbidity on a scale far and above most medical disease or infection, and also above many safety issues.” He suggested moderators ask what state gun safety policies the candidates would adopt at a national level, what they would include in a “package of laws aimed at reducing or preventing the different forms” of gun violence, and whether they view the subject as a public health issue, “an issue of constitutional rights, or a criminal justice issue.” Lowenthal added that suicide, mental health, research funding, community trauma, and urban violence are among the aspects of gun violence that receive too little media attention during presidential debates. He urged moderators to keep in mind that gun violence “really represents multiple, parallel epidemics” and “there will be no one solution that solves all of it,” cautioning that “any individual solution can be smeared as ineffective.”

Chelsea Parsons, vice president of gun violence prevention at the Center for American Progress, said Todd bought into “the misleading framing of the NRA and other far-right conservatives” when he made confiscation the focal point of his gun violence questions. Parsons went on to say, “Confiscation is completely irrelevant to the current gun policy debate, and this type of question takes the focus off of candidates’ actual violence prevention policy priorities.” She said she wants moderators to ask the candidates, “What would you do to address this public health epidemic using both your executive authority and working with Congress to enact new gun laws.”

Josh Horwitz, executive director of the Coalition to Stop Gun Violence urged moderators to discuss actual policy proposals in the gun violence prevention movement, something that people have vetted, as opposed to fears that a nationwide gun buyback program will lead to confiscation. Horwitz suggested asking candidates about their support for extreme risk protection orders as a way to reduce firearm suicide, and permit to purchase laws which he says have been proven to be more effective at reducing gun violence than background checks.

Daniel Webster, director of the Johns Hopkins Center for Gun Policy and Research, said he “hated Chuck Todd’s question because he implied that gun laws are about confiscation when that has not been the case.” Instead, Webster said he wants to know “what would candidates do in addition to comprehensive background check requirements” and suggested that moderators should ask candidates “if or how their plans for tackling gun violence” are based on actual data or scientific research.

Igor Volsky, founder and executive director of Guns Down, called Todd’s question “unnecessarily sensationalistic, particularly since nobody is advocating broad-based confiscation.” He urged moderators to base the questions around the facts that “guns are becoming increasingly lethal,” they are “incredibly easy to get,” and the U.S. has “the highest rates of gun deaths.” “The moderators expect big solutions from candidates on issues like climate change or health care,” Volsky added, “and they should also expect -- and push -- candidates to articulate bold, comprehensive, and new solutions for reducing gun violence.”

Parsons, Horwitz, Webster, and Lowenthal also highlighted that the majority of U.S. gun deaths are suicides -- nearly 24,000 in 2016 alone -- and they agreed that moderators need to ask candidates what specific policies they would support to reduce that number.