“Radical activists like Alexandria Ocasio-Cortez are about to be running D.C." ... “I’m about to teach her and her cronies a few things they are going to wish they never learned” ... “All Flights are Canceled” ... “They want to impose their socialist nightmare on America.”

Members of the right-wing grift industry really want to scare you about the “socialist nightmare” that Rep. Alexandria Ocasio-Cortez (D-NY) purportedly hopes to impose on the country -- and they need your money to stop it from happening.

The conservative movement has been infected with scams and hucksters for years. Some of the most fertile ground for grifters has been right-wing email lists, which contain messages with warnings to conservatives about purported threats to their health, safety, and financial security. In prior years, missives about the supposed damage that then-President Barack Obama would inflict on the nation were commonplace.

With Obama out of office, many right-wing grifters are now using Ocasio-Cortez and her policy proposals -- especially the Green New Deal -- as a scary specter of the future. Those grifters include a disgraced financial firm advertising with an anti-Semitic publication, the National Rifle Association, Jack Abramoff, and James O’Keefe. Here’s a look at some of their pitches.

Stansberry Research is a financial firm that’s previously been fined $1.5 million for engaging in “deliberate fraud” and profiting from “false statements.” Its founder, Porter Stansberry, has used racist and anti-gay slurs on his online radio program.

The firm has been using the supposed threat of Ocasio-Cortez to bring in business. In emails with subject lines like “This Socialist scheme should worry you” and “Why is this happening in America?,” Stansberry founding partner Mike Palmer writes: “We are witnessing a raging Socialist movement in America today. Just for starters … America's new political star, Alexandria Ocasio-Cortez is pushing for free medical care, free college, and 70% tax rates.” The email links to a sign-up page to buy Porter Stansberry's book at $5 and then puts subscribers in their email list.

That email was sent as a sponsored advertisement to right-wing email lists, including one belonging to the anti-Semitic publication American Free Press. That outlet has repeatedly published blatantly false claims that the Holocaust is a “hoax” and other anti-Semitic content. 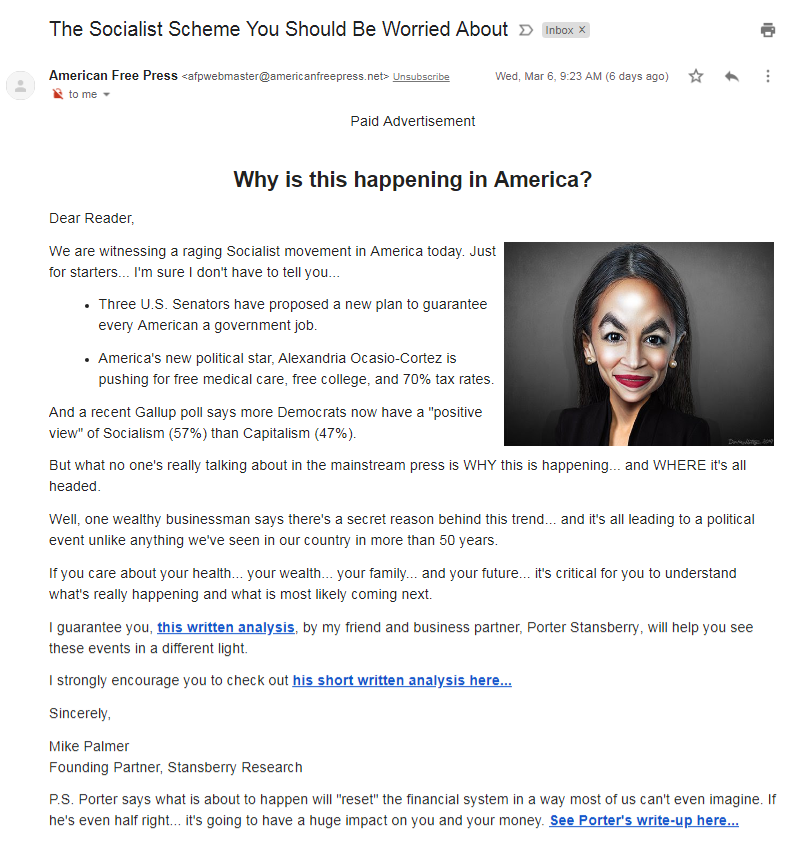 The NRA’s shady finances have recently taken a hit amid a series of problems for the group during the Trump administration. The pro-gun organization has unsurprisingly used Ocasio-Cortez to raise money, writing that she and House Speaker Nancy Pelosi (D-CA) “want to impose their socialist nightmare on America.”

Disgraced fraudster Jack Abramoff: “I’m about to teach her and her cronies a few things they are going to wish they never learned - and it won’t just be a math lesson”

Jack Abramoff is one of the most notorious fraudsters in recent American politics. As Reuters summarized in 2017:

Abramoff in 2006 pleaded guilty to felony counts of conspiracy, fraud, and tax evasion. His name became synonymous with government corruption, and Democrats attacked their Republican opponents who had ties or had received campaign donations from him.

In addition to bribing government officials, Abramoff was accused of defrauding clients who were Native American tribes lobbying about reservation casinos. Abramoff was released from federal prison in 2010 and was then subject to three years on probation.

Abramoff is now the honorary chairman of Protect American Values, an anti-environmental political action committee. He sent an email in February asking for donations, writing: “Alexandria Ocasio-Cortez wasn’t even in diapers when I started fighting the Left, and I’m about to teach her and her cronies a few things they are going to wish they never learned - and it won’t just be a math lesson.”

SEAL PAC (Supporting, Electing American Leaders PAC) states that it wants to be a “voice for thousands of veterans and patriots” -- but in recent years the organization has been mired in questions about its fundraising practices. Former Interior Secretary Ryan Zinke founded the group in 2014 but left it when he entered the Trump administration. As Politico reported last December:

Zinke’s 2014 congressional campaign hired Forthright Strategy, a D.C. firm run by a conservative fundraiser and activist named Kimberly Bellissimo, to help it raise money from small donors. Forthright has been criticized by some fellow Republicans who said it charged more in fees than it transferred to campaign coffers.

With Zinke, Forthright advertised on its website that it transferred more than $500,000 to his campaign — after having raised nearly $2 million. After Zinke won the election, Forthright heralded his success on its website as proof of its fundraising skill.

Zinke, for his part, seemed to employ similar tactics with his own fundraising.

Zinke established a political action committee called SEAL PAC in November 2014, mailing the filing paperwork mere days before he was elected to Congress. In the first two full years of its existence, SEAL would pay half of the $3 million it raised to companies associated with Bellissimo and only $118,000 on actual candidates, according to campaign finance disclosures.

Politico also reported in April 2018 that the “Federal Election Commission is asking a leadership PAC previously affiliated with Interior Secretary Ryan Zinke to account for more than $600,000 of previously unreported contributions from the first six months of 2017. … This is the second time in recent months the FEC has asked SEAL PAC about a discrepancy in its books while [attorney Vincent] DeVito was treasurer. In November, regulators asked the PAC to account for $200,000 in cash on hand that suddenly appeared on its books between Dec. 31, 2016, and Jan. 1, 2017.”

The group sent an email with the false subject line “All Flights are Canceled” and with opening text falsely claiming that “Alexandria Ocasio-Cortez wants to ban meat-eating in America.”

Anti-LGBTQ and conspiracy theory group fundraises off of AOC

Fraudster James O’Keefe: “Radical activists like Alexandria Ocasio-Cortez are about to be running D.C.”

James O’Keefe is a serial liar and huckster who once attempted “to embarrass” a reporter by planning to get her “onto a boat filled with sexually explicit props and then record the session.” In 2010, as The Hill summarized, he was “sentenced to three years of probation, 100 hours of community service and a $1,500 fine after he pleaded guilty on Wednesday to misdemeanor charges stemming from his involvement in a break-in at Sen. Mary Landrieu’s (D-La.) office.”

Prior to the start of this year’s congressional session, O’Keefe sent an AOC-centric fundraising email, writing: “Radical activists like Alexandria Ocasio-Cortez are about to be running D.C. Our undercover journalists must be there to greet them and hold Washington accountable -- cameras ready. But I need your support right now. Our allies have to be ready to expose their corruption. Click HERE to donate.”

Dan Backer has been involved with so many shady organizations that he was been dubbed the “master of ‘scam PACs’” by Milwaukee Journal Sentinel columnist Daniel Bice.

In March, Backer helped start a new group called Stop the AOC PAC. He then sent a falsehood-filled email claiming that Ocasio-Cortez has “made a name for herself as the face of the New Socialist Left with wacky, unworkable, and downright crazy policies like the Green New Deal – calling for the elimination of gas-powered cars and airplanes – banning the consumption of hamburgers and make everyone go vegan. And Democrats are goose-stepping in line behind her!”