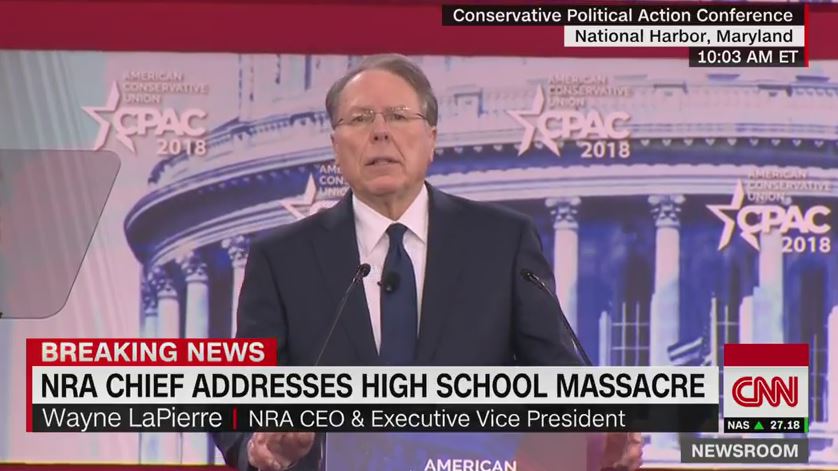 The National Rifle Association’s (NRA) leadership has broken its silence following last week’s mass shooting at Marjory Stoneman Douglas High School. Comments made by its leadership at CNN’s February 21 town hall on gun violence and during speeches at CPAC indicate that the NRA is coalescing around a misleading talking point that attacks the national background check system for gun purchases.

Three different times during a 24 hour period, NRA leadership bemoaned that states are not required to submit disqualifying records into the background check system:

There’s one major problem with this talking point: The NRA’s actions are the reason states can’t be required to submit disqualifying records into the National Instant Criminal Background Check System (NICS).

During the 1990s, the NRA backed a lawsuit Printz v. United States that sought to block the implementation of NICS, which was created by the 1993 Brady Bill.

While the system eventually went into effect, the outcome of Printz damaged its effectiveness, as the Supreme Court ruled in a 5-4 decision in favor of the NRA’s argument that requiring states to perform background checks for a federal system violated the 10th Amendment.

The ruling also had implications on whether states can be required to submit disqualifying records into the background check system. As the Giffords Law Center to Prevent Gun Violence explains, “Federal law cannot require states to make information identifying people ineligible to possess firearms available to the federal or state agencies that perform background checks” because “case law suggests that a federal statute requiring states to disclose records to the FBI would violate the Tenth Amendment” due to the Printz ruling.

In Loesch’s CPAC comments, she asked “Why isn’t Dianne Feinstein calling for” more records to be put in the system. In fact, Feinstein is the co-sponsor of bipartisan legislation introduced by Sen. John Cornyn (R-TX) and Sen. Chris Murphy (D-CT) that would further incentivize states to provide records into the system.

LaPierre revived the NRA’s past claim today at CPAC that the NRA should be credited for the creation of NICS. But the reality is that when the law was being considered as legislation, the group tried to stymie it at every turn, and once it was enacted attempted to sue it out of existence.