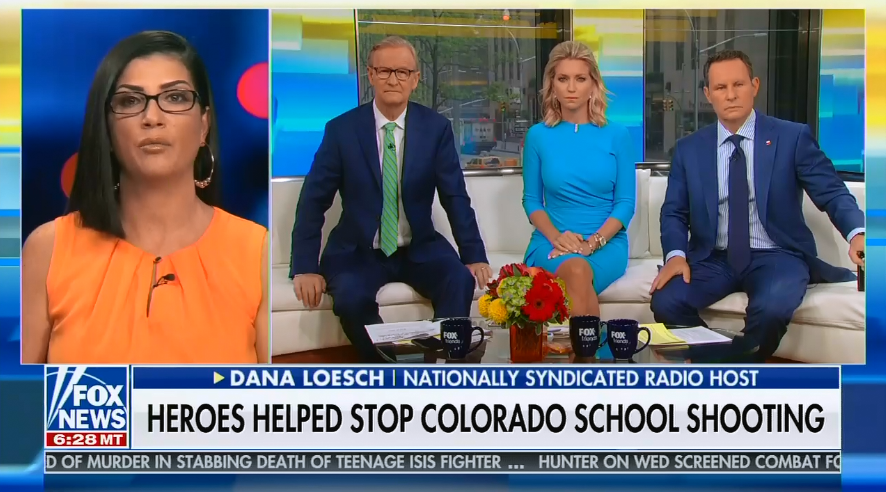 On May 7, one student was killed and eight others injured when two shooters opened fire in STEM School Highlands Ranch. Two students, Brendan Bialy and Kendrick Castillo, reportedly tried to tackle the alleged shooters with the help of an unidentified third student. Castillo was shot as he rushed one of the attackers and died at the hospital.

Shortly after the shooting, Loesch went on Fox News to accuse gun safety activists of politicizing the tragedy because of their tweets condemning gun violence. Loesch returned to Fox on May 9, appearing on Fox & Friends to offer as possible causes for the Highlands Ranch school shooting a lack of “respect for life,” a lack of “boundaries for our youth,” and a lack of “that solid family home.”She went on to suggest “psychotropic drugs” as a possible reason for the uptick in school shootings, claiming one of the gunmen was “abusing illegal drugs”:

AINSLEY EARHARDT (CO-HOST): What is the problem? You said there is “a heart problem” in our country. How do we prevent this from happening again?

DANA LOESCH (NRA SPOKESPERSON): You know, Kendrick is the same age as my oldest son. And I understand Kendrick Castillo is graduating this week and my oldest son is graduating this week. So, you know, as a mother you look every single kid out there -- and you know this, Ainsley, every single kid out there is your own child. And it makes me so angry his life was taken so prematurely from him by someone so evil and so horrendous. And I think that’s -- I wish that is the discussion we could have in this country.

There is something wrong with our youth, everybody. There is something that is happening in our culture because we have always had firearms, but we have never had this many incidents. We also have more restrictive laws and more regulations. I mean, Colorado has a lot of gun laws. We have a number of things that are taking place. But what we are lacking is a respect for life. What we are lacking are clear boundaries for our youth. We're lacking that solid family home, and I don't know if all of this or if some of this playing into why we keep seeing individuals reacting this way.

Is it psychotropic drugs? We know a couple of things that one of the individuals apparently, according to reports in law enforcement, had been abusing illegal drugs and was in therapy. If we’re gonna discuss warning signs, how about that? They stole two handguns, they're illegal to carry and possess by people under age 21. And I hope, by the way, that more people check out the NRA School Shield program so we can get more armed security guards in some more of these schools so that we can prevent anything like this from ever happening again.

Blaming shootings on “psychotropic” and “psychiatric drugs” instead of access to firearms is a favorite talking point of the right-wing conspiracy theory outlet Infowars. The website has attempted to blame mass shootings in Las Vegas, NV, Parkland, FL, and Jacksonville, FL, on the shooters’ reported medications.

In reality, people struggling with mental health issues are more likely to be victims of violence rather than perpetrators. According to Duke University professor Jeffrey Swanson, a leading researcher on violence and mental health, “If we were able to magically cure schizophrenia, bipolar disorder and major depression, that would be wonderful, but overall violence would go down by only about 4 percent.” As Julia Fast, an expert in bipolar disorder, wrote in Psychology Today:

It’s not a chicken or the egg problem. There is the mental health concern and then there are drugs as a response, not a cause. The NRA and other gun rights lobby groups are conveniently skipping the most important part of the problem: the shooters are on drugs because there were signs that something was not right in their brains from the beginning.