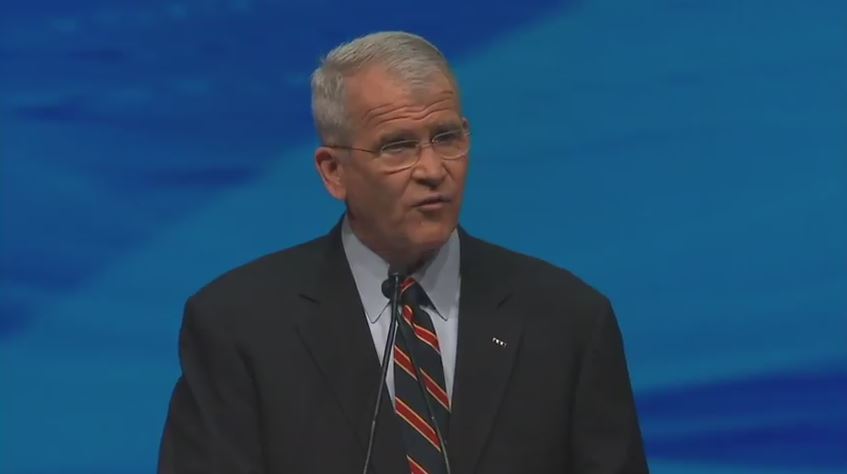 Incoming National Rifle Association President Oliver North, a former Fox News contributor and a national security aide in the Reagan administration, claimed that survivors of the February school shooting in Parkland, FL, are engaged in “intimidation and harassment and lawbreaking” in their advocacy for stronger gun laws.

North, who was chosen president of the NRA by the group’s board of directors earlier this week, made the comments in an interview with The Washington Times.

North commented on activism by survivors of the mass shooting at Marjory Stoneman Douglas High School, saying they were involved in harassment, intimidation, and illegal activities. He did not provide any evidence for his claim. From the Times:

He said the young survivor-activists who have emerged as representatives for gun restrictions — and as fierce opponents of the NRA — are getting swept up by a broader propaganda machine.

“What they did very successfully with a frontal assault, and now intimidation and harassment and lawbreaking, is they confused the American people,” he said. “Our job is to get the straight story out about what happened there, and to make sure that kind of thing doesn’t happen again because the proper things are being done with the advocacy of the NRA.”

Unlike the Parkland activists, North does know something about criminal activity. While serving in the Reagan administration, he was a central figure in the Iran-Contra scandal, which involved the U.S. secretly selling arms to Iran, and was convicted of three felonies for his role in it. North’s convictions were later vacated, although in 1994, a judge revoked his permit to carry a concealed gun in public, citing North’s “conviction for crimes involving moral turpitude.”

North also said that the NRA was receiving threats and that a “cyberwar” was being carried out against the organization, and he compared the NRA to victims of the Jim Crow era:

Mr. North said the NRA is now the victim of “civil terrorism” after vandals splashed fake blood on the Virginia home of a top NRA official and other opponents aimed personal “threats” at NRA leaders and members.

“They call them activists. That’s what they’re calling themselves. They’re not activists — this is civil terrorism. This is the kind of thing that’s never been seen against a civil rights organization in America,” he said.