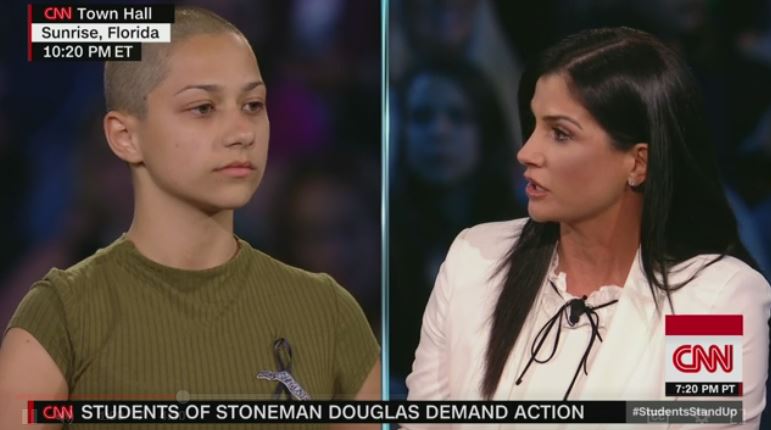 Emma Gonzalez, a student at Marjory Stoneman Douglas High School, had a simple question for National Rifle Association (NRA) national spokesperson Dana Loesch during CNN’s gun violence town hall: “Do you believe that it should be harder to obtain the semi-automatic ... weapons and the modifications for these weapons to make them fully automatic, like bump stocks?”

Instead of providing the NRA’s well established positions on these questions, Loesch gave a series of dishonest explanations that sought to hide the NRA’s fringe absolutism against gun regulation.

After some niceties, Loesch purported to answer Gonzalez's question by saying, “I don't believe that this insane monster should have ever been able to obtain a firearm, ever. I do not think that he should have gotten his hands on any kind of weapon. That's number one.”

According to Loesch, “This individual was nuts and I, nor the millions of people that I represent as a part of this organization, that I'm here speaking for, none of us support people who are crazy, who are a danger to themselves, who are a danger to others, getting their hands on a firearm.”

The NRA opposes adding prohibiting categories to the gun background check system that could have included the Stoneman Douglas gunman. As the NRA’s website states, “NRA opposes expanding firearm background check systems, because background checks don’t stop criminals from getting firearms.” It also opposes a policy called a “Gun Violence Restraining Order” or a “Red Flag” law that has been widely cited as a policy that could have stopped the gunman from having access to firearms. These laws allow family members and law enforcement to petition courts to temporarily remove people’s access to firearms who are a danger to themselves or others.

Loesch’s dishonesty didn’t stop with that claim. Moments later, while talking about the National Instant Criminal Background Check System (NICS), Loesch said, “It is not federal law for states to report convictions to the NICS system. It's not federally mandated.” Loesch also argued that the states can convict a person, they “can adjudicate the mentally unfit,” but “if a state does not report it to the National Crime Information Center, when you run that form, this individual -- this madman passed a background check.” (NRA CEO Wayne LaPierre also used this talking point in his February 22 speech at CPAC.)

What Loesch failed to mention is that states can’t be required to report disqualifying records because of the outcome of a 1997 NRA-backed lawsuit Printz v. United States.

The lawsuit was the NRA’s attempt to invalidate the entire national background check system in court before it could be implemented. While the system eventually went into effect, the outcome of Printz damaged its effectiveness, as the Supreme Court ruled in a 5-4 decision in favor of the NRA’s argument that requiring states to perform background checks for a federal system violated the 10th Amendment.

The ruling also had implications on whether states can be required to submit disqualifying records into the background check system. As the Giffords Law Center to Prevent Gun Violence explains, “Federal law cannot require states to make information identifying people ineligible to possess firearms available to the federal or state agencies that perform background checks” because “case law suggests that a federal statute requiring states to disclose records to the FBI would violate the Tenth Amendment” due to the Printz ruling.

Loesch didn’t mention semi-automatic weapons, but offered some muddled comments about bump stocks and said, “So, that answers your question.” (The organization has a deceitful position on the issue that decreases the chances they will be eventually banned.)

The NRA had a responsibility to offer straightforward, honest statements about gun policy at CNN’s gun violence town hall, but instead what Loesch offered were lies and spin.