Is there any national tragedy the National Rifle Association won't exploit to make a buck?

Last year the NRA marked the tenth anniversary of the 9-11 attacks by sending its members two separate fundraising emails referencing the terrorist strikes. Over the weekend the NRA continued the trend, marking the anniversary of the Challenger Space Shuttle disaster by encouraging their members to buy NRA-brand products from the NRAstore.com. Quoting President John F. Kennedy's words over a photo spread of the assassinated president and the shuttle, the NRA told their members, “The cost of freedom is always high, but Americans have always paid it.”

Then the email proceeds try to unload some the NRA's “Pursue Freedom” products in the hope that Americans are willing to pay for them as well. Now you too can “Pursue Freedom of Buckle Choices” with a selection of official “NRA Western Tooled Belts.” 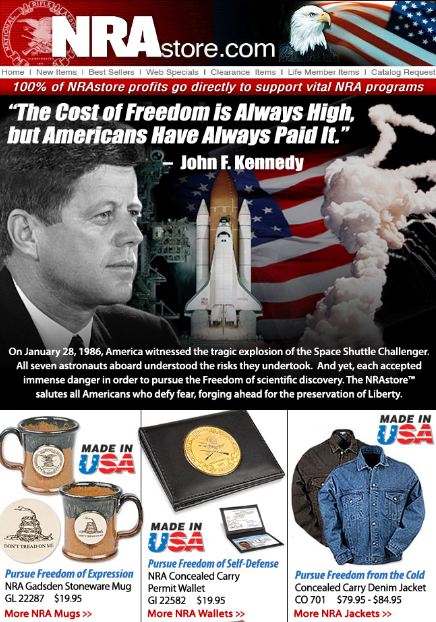 Much like the NRA store's 9-11 fundraising effort the recent email shows real-life images of fiery explosions seen by millions of Americans above advertisements for NRA branded mugs, clothing and other various trinkets.