The National Rifle Association (NRA) is trying to raise money off of its idiotic claim that “the mainstream media love mass shootings.”

Since the deadly February 14 shooting in Parkland, FL, the NRA and its affiliated personalities have repeatedly lied about guns; pushed the conspiracy theory that the school shooting survivors are so-called crisis actors (they obviously are not); and argued that more teachers should be armed in schools -- an idea that lacks any backing evidence but would surely serve to increase the profits of gun manufacturers who support the organization.

The organization is also attempting to divert attention from its own role in the country's culture of gun violence by attacking the “mainstream media” for its purported “love” of mass shootings.

The NRA’s media arm, NRATV, sent a February 23 email with the subject “Help Us Fight The Dangerous Media” and featuring the statement from NRA commentator Colion Noir that the media loves mass shootings. That claim is also part of a recent NRA ad, in which Noir says that “mass shootings have become [the media’s] Game of Thrones, their House of Cards, their Seinfeld, and their Friends, all wrapped into one.” The quote is superimposed over a composition of television screenshots and includes a “Donate Now” button: 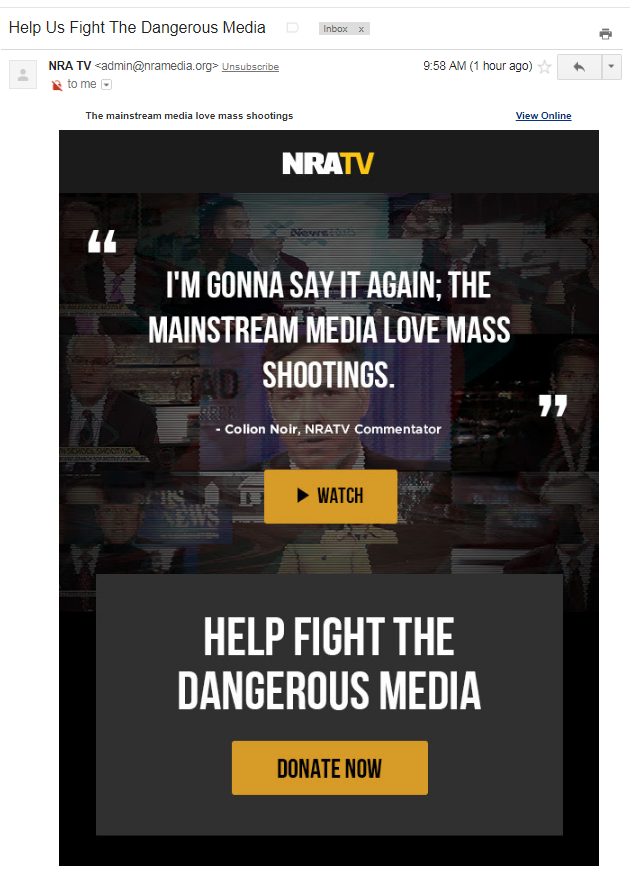 NRA national spokesperson Dana Loesch pushed the claim that “many in legacy media love mass shootings” while speaking at the Conservative Political Action Conference (CPAC) yesterday. Reporters have responded to the NRA’s argument by noting their own “horrific” and “devastating” experiences covering mass shootings.

CNN reporter Brian Stelter wrote in a February 23 piece: “Some analysts have speculated that the NRA has ramped up its anti-media messaging to motivate existing members and to recruit new ones. In the absence of a Democratic president in power to focus their attacks, the NRA has taken to criticizing media outlets instead. Condemning the news media doubles as a way to market the NRA's own publications and TV shows.”

The email also claims, among other things, that the “NRA took on the socialist wave at CPAC” and has been “fighting the dangerous media’s violent lies.” It adds: “At NRATV, We're Not Members of the Media. We're Members of the NRA. And Our Ultimate Weapon Is Truth.”