Since there's no anniversary of a national tragedy to exploit this week, the NRA had to resorted to more classic gun lobby tactics in their most recent fundraising e-mail. This time, they suggest that by supposedly criticizing the NRA's extremist policies, the media is “raining down a message of hate on gun owners to boost Obama's re-election campaign.”

NRA chief lobbyist Chris Cox tells NRA members these media attacks against gun owners are “getting worse by the day”:

That's why the freedom-hating media elites see you as a THREAT. That's why they're dramatically stepping up their attacks on gun owners--labeling us as lunatics and nuts in a deceitful effort to help win the election for Obama.

From the Minneapolis Star Tribune saying that “Castle Doctrine” laws give gun owners a “chilling license to kill” to the Philadelphia Magazine accusing NRA members of hating children, the media is raining down a message of hate on gun owners to boost Obama's re-election campaign.

I can go on... the Washington Post, New York Times, Newsweek, Time, ABC, MSNBC and CBS News, Associated Press, Chicago Sun Times, Miami Herald and too many more to list have all joined with Obama and the gun-ban lobby to destroy your gun rights.

Last month, NRA Executive Vice President Wayne LaPierre claimed the existence of a “massive Obama conspiracy” to get the president re-elected by taking no action on guns, then use his second term to repeal the Second Amendment. The NRA now appears to be claiming that the media are in on the scheme.

The only two articles Cox bothers to specify as examples of the increasing attacks against gun owners were both written in May. Beyond not being especially timely, the articles are ridiculous examples to present as attacks on gun owners by “media elites” in defense of President Obama. Both concern state laws without any particular connection to President Obama.

The Minneapolis Star Tribune article referring to the Castle Doctrine as a "chilling license to kill" wasn't even authored by a media figure, but in fact was written by a Minnesota police chief.

The Philadelphia Magazine article referred to was written by columnist Sally Hingston. Hingston wrote a column savaging the NRA's lobbyists - not its members - for their Florida effort to keep pediatricians from asking their patients and their parents about guns and gun safety in the home.

Florida's NRA-backed law has already been blocked by a federal judge for violating freedom of speech. The initial version of the NRA-backed bill would have potentially led to 5 million dollar fines or 5 year prison sentences. It's hard to believe that gun owners that aren't paid NRA lobbyists looking to gin up controversy are eager to start jailing doctors. Using the same contrived logic that Cox applies to Hingston, you could say that pro-gun bloggers that called the Florida legislation "dumb" and "stupid" are calling NRA members stupid and dumb.

The subject line of the latest fundraising effort asserts that attacks against the NRA are attacks against gun owners saying, “Anti-gun media now attacking you and me”. In reality NRA members and gun owners don't always agree with the extremist positions of the NRA. 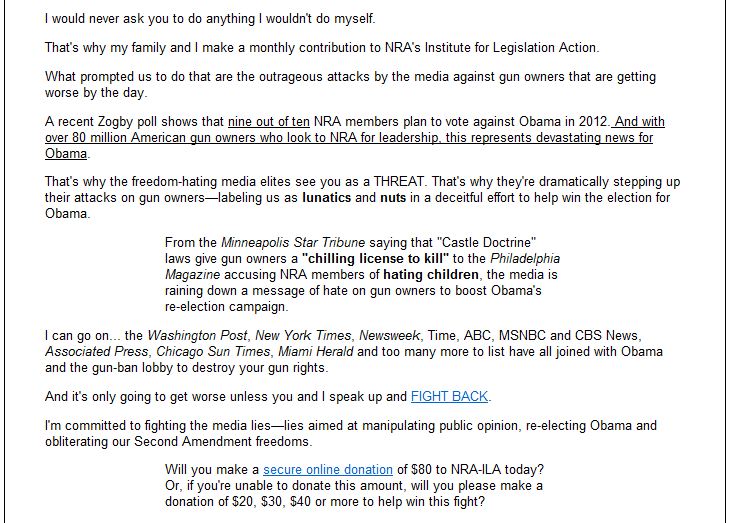