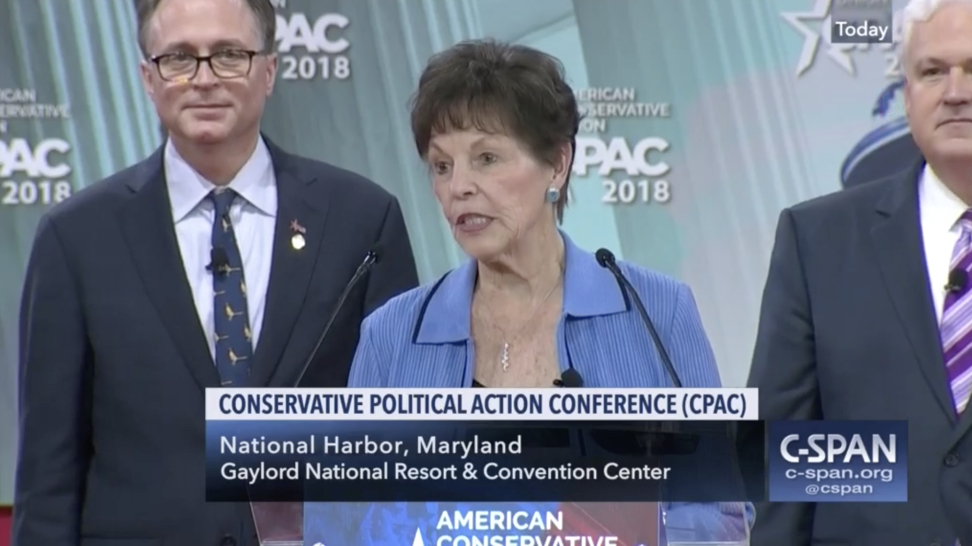 Update (5/7/19): Meadows released the following statement to The Washington Post apologizing for her comments: “I apologize to Rep. McBath and her supporters. My comments were insensitive and inappropriate. I did not intend to discredit the congresswoman or the merits of her campaign — only to reflect my view that the Second Amendment was not a prevailing factor in this election.”

New National Rifle Association President Carolyn Meadows claimed that Rep. Lucy McBath (D-GA) won her 2018 election to the U.S. House not because of her support for gun violence prevention, but because she is a “minority female.”

Meadows was elected president of the NRA during an April 29 meeting of NRA board members following weeks of public infighting at the gun group. Her comments about McBath were reported in a May 5 article in the Marietta Daily Journal. As the Daily Journal related:

Meadows’ own backyard will be part of the political battlefield as she and other right-leaning groups target U.S. Rep. Lucy McBath, D-Marietta, who represents Georgia’s Sixth Congressional District. Last year, McBath unseated then-incumbent Karen Handel, R-Roswell, who has announced her intention to run for the seat again.

“There will be more than one person in the race, but we'll get that seat back,” Meadows said. “But it is wrong to say like McBath said, that the reason she won was because of her anti-gun stance. That didn't have anything to do with it — it had to do with being a minority female. And the Democrats really turned out, and that's the problem we have with conservatives — we don't turn out as well.”

McBath ran for Congress in 2018 on a gun law reform platform following the murder of her son, Jordan Davis, by a man who later attempted to use the NRA-authored “Stand Your Ground” law as a legal defense in his criminal trial. Meadows also mentioned McBath in an interview published on April 30 in The Atlanta Journal-Constitution, promising to direct NRA resources to the race in her home congressional district and saying that the NRA will endorse whoever runs against McBath in 2020.

In addition to her work with the NRA, Meadows is the leader of an organization, the Stone Mountain Memorial Association (SMMA), that blocked a 2015 proposal to construct a monument to Dr. Martin Luther King Jr. on Stone Mountain, GA. According to the SMMA board of directors, which Meadows chairs, the King memorial would have conflicted with the massive memorial to the Confederacy that the SMMA maintains at Stone Mountain. Stone Mountain is also the site where the second iteration of the Ku Klux Klan was launched with a cross burning ceremony in 1915. In his 1963 “I Have a Dream” speech, King said, “Let freedom ring from Stone Mountain of Georgia.”