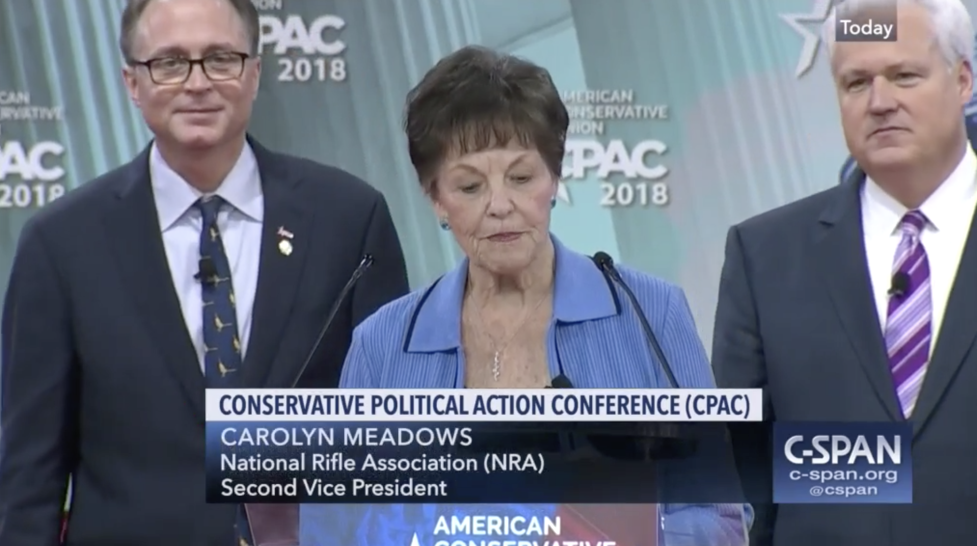 Carolyn Meadows, who is succeeding Oliver North as president of the National Rifle Association, is also the chairperson of the Stone Mountain Memorial Association, an organization that maintains the largest memorial to the Confederacy in the United States.

Meadows, who sits on the NRA board of directors and was serving as the group’s second vice president, was elected president of the NRA during an April 29 meeting of NRA board members. She will succeed North, who was ousted from the NRA amid infighting that pitted a faction led by NRA CEO Wayne LaPierre against North and Ackerman McQueen, an ad firm that is deeply enmeshed with the NRA and produces the NRA’s media operation, NRATV. LaPierre, who North said engaged in financial improprieties in his role as NRA CEO, was reportedly unanimously reelected CEO by the board.

Meadows is listed by the Stone Mountain Memorial Association website as chairperson of the organization’s board of directors. According to her site bio, “She has been actively involved in the Republican Party since 1964 and served as Georgia’s National Chairwoman for 12 years,” and she is also a board member of the American Conservative Union, the group that hosts the annual Conservative Political Action Conference (CPAC).

Stone Mountain, GA, features an enormous relief carving that depicts Confederate leaders Robert E. Lee, Stonewall Jackson, and Jefferson Davis on horseback. A 2017 article in Smithsonian magazine notes that “the monument in question is carved 42 feet deep and 400 feet above ground into a granite mountain” and “is a testament to the enduring legacy of white supremacy.”

Stone Mountain is also closely associated with the revival of the Ku Klux Klan. KKK leader William Simmons “ushered in the modern era of the Ku Klux Klan, founding the Second KKK at the top of Stone Mountain on November 25, 1915,” in an event that included a cross burning and signaled “a new era of white nationalist terrorism,” according to Smithsonian magazine. Plans for the memorial were already being made at the time of the Klan ceremony, but the project ended up being shuttered for several decades and was only revived following right-wing anger over the 1954 Brown v. Board of Education Supreme Court decision ending school segregation. The monument was eventually completed in 1972.

Meadows is not the only prominent NRA official to support Confederate symbols. NRA board member Ted Nugent, who was reelected during the 2019 NRA annual meeting, has long been an outspoken defender of the Confederate flag. Previous NRA President Jim Porter, who served two years as president beginning in 2013, was also an apologist for the Confederacy, having once stated, “NRA was started 1871 right here in New York state. It was started by some Yankee generals who didn't like the way my Southern boys had the ability to shoot in what we call the 'War of Northern Aggression.'”

The NRA often calls itself the oldest civil rights organization in America, although that isn’t true.