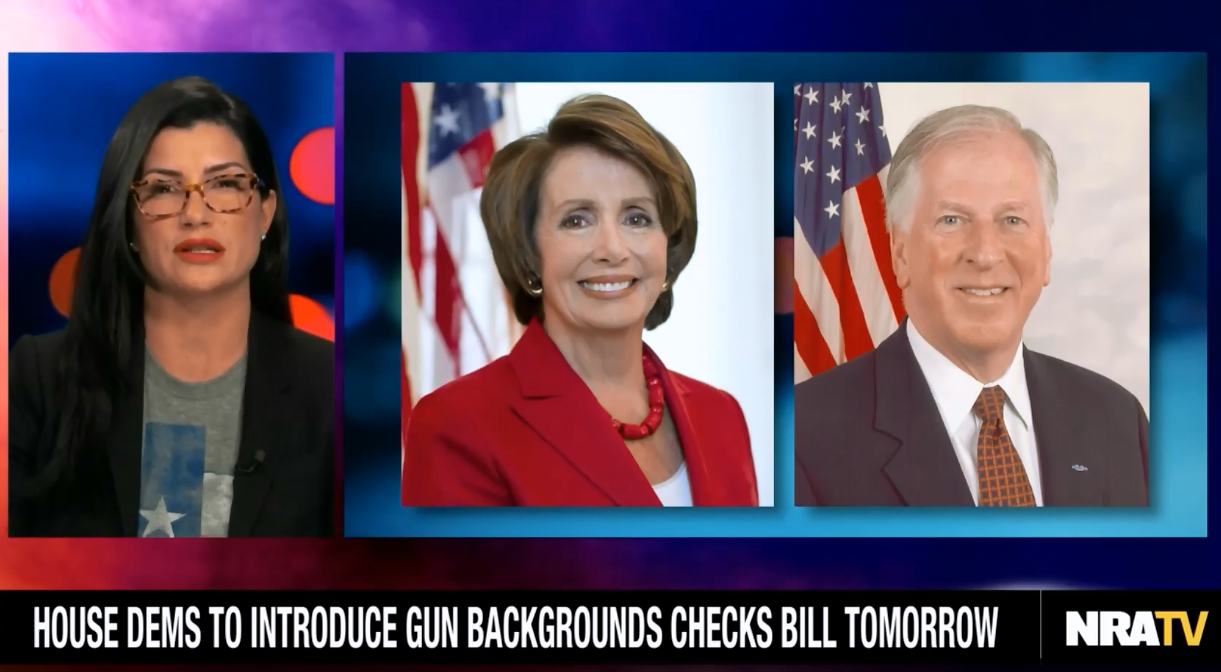 National Rifle Association spokesperson and NRATV host Dana Loesch said that she has “not seen any cross-tab data” showing almost unanimous support for requiring background checks on all gun sales despite years of polling showing just that.

During the January 7 edition of her NRATV show Relentless, Loesch previewed the forthcoming introduction of a bipartisan U.S. House bill to expand background checks on gun sales and read House Speaker Nancy Pelosi’s statement that “it is an honor” to introduce a bill “which 97 percent of the American people support.” Loesch took issue with the statistic, claiming she has “not seen any cross-tab data that at all supports that assertion whatsoever” and that she is “awaiting all of that.” In an interview with Loesch, NRA Institute for Legislative Action spokesperson Lars Dalseide claimed Pelosi is either “unaware of the facts” or is “spreading yet another false rumor”:

DANA LOESCH (HOST): House Democrats are set to introduce their first salvo of gun control bills tomorrow. California Democrats Nancy Pelosi and Mike Thompson have chosen tomorrow’s date, January 8, for the unveiling -- the eighth anniversary of the Tucson shooting, which left six dead and 15 wounded including former Rep. Gabby Giffords, who will join Pelosi and Thompson in the Capitol. Says Pelosi, “It is an honor to join Congressman Mike Thompson and former Congresswoman Gabby Giffords to answer their call by taking the first step to pass commonsense background checks, which 97 percent of the American people support.” Now Congresswoman Pelosi must be unaware that we have a background checks system, a system that is made possible thanks to the NRA. I’ve seen that 97 percent thrown around for quite some time, but yet have not seen any cross-tab data that at all supports that assertion whatsoever. And still am awaiting all of that. Joining me now to discuss is Lars Dalseide, spokesman for NRA’s Institute for Legislative Action.

In fact, a February 20, 2018, Quinnipiac poll -- conducted nearly one week after the mass shooting at Marjory Stoneman Douglas High School in Parkland, FL -- showed both 97 percent of all Americans and 97 percent of gun owners supported requiring all gun buyers to undergo a background check. The background check issue has been polled repeatedly over the last several years by different polling firms, and the results always show near-universal support for requiring checks.

Dalseide echoed Loesch’s falsehood. And he made a dishonest comparison between polling on the background check issue and the outcomes of two 2016 state background check ballot initiatives -- i.e. not polls -- to falsely accuse Pelosi of spreading incorrect information:

LARS DALSEIDE: As for Speaker Pelosi and her “97 percent,” if that were true then you have to wonder about why that’s not reflected when it comes to the polls. There were two huge universal background check ballot initiatives that came up in 2016, for example. And neither -- well, one of them broke 50 percent and the other one hit 50 or 48 percent. So to say that 97 percent of the public supports these universal background checks, either she’s unaware of the facts or just spreading yet another false rumor when it comes to gun control.

Notably, the NRA ran false attack ads against the Maine and Nevada background check ballot initiatives suggesting that the laws could easily land law-abiding gun owners in jail. When the public is plainly asked about support for requiring background checks for all gun sales, the answer is consistently near-universal support.