Following the tragic shooting of Trayvon Martin troubling questions about the role of Florida's “Stand Your Ground” legislation have emerged. The legislation expanded the circumstances in which people can claim use of deadly force was defensive, which some in the media have suggested could undermine an effort to prosecute Martin's killer George Zimmerman. Sanford, Florida's police chief has said that because Zimmerman claimed self-defense, under that statute he could not be arrested.

No figure has done more to promote the gun lobby's push to expand the boundaries of the legal use of deadly force than former NRA president and chief Florida lobbyist Marion Hammer, who was the force behind the passage of Florida's statute. Martin's death hasn't caused her to rethink the wisdom of “Stand Your Ground.” On Tuesday, she told the Palm Beach Post that Florida Governor Rick Scott (R) would “waste time” if he were review the legislation:

NRA lobbyist Marion Hammer, who pushed for the law, agreed [with Rep. Dennis Baxley's defense of the bill]. She said the call for action is premature, because the law allows an arrest to take place after an investigation. “So for law enforcement to rush to judgment just because they are being stampeded by emotionalism would be a violation of law,” she said.

“This law is not about one incident. It's about protecting the right of law-abiding people to protect themselves when they are attacked. There is absolutely nothing wrong with the law. And if the governor wants to waste time looking at it he can knock himself out.”

Hammer isn't just any NRA lobbyist. According to the NRA, Hammer “exemplifies activism” to the extent the organization annually gives out a “Marion P. Hammer Woman Of Distinction Award.” Beyond her support for what critics have dubbed "shoot first laws," Hammer has expressed extremist positions and used inflammatory rhetoric during other legislative battles. 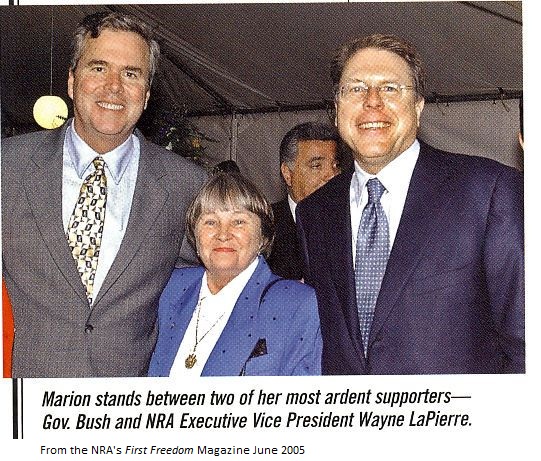 In 2005 Hammer successfully pushed “Stand Your Ground” through the Florida legislature, which was then the first state in the nation to pass such legislation. During the debate over the bill's passage, she repeatedly mocked opponents for engaging in “hysterics.” The NRA's chief lobbyist Chris Cox was quick to credit Hammer's lobbying effort. In the NRA's American Hunter magazine Cox wrote:

Thanks in no small part to the tireless efforts of our own former President Marion P. Hammer, law-abiding Floridians may now stand their ground and defend themselves against attack by violent criminals without fear of criminal prosecution or civil lawsuit.

Later that year, Hammer presented Florida's legislation before a task force of the American Legislative Exchange Council (ALEC). ALEC subsequently adopted Florida's bill as model legislation which they promoted throughout the country using their network of conservative state legislators. The effort was quite successful. According to the Legal Community Against Gun Violence, 24 states currently have “Florida-style” laws, with seven others having similar laws that allow expanded self-defense claims in specified locations.

Hammer's lobby efforts also attracted controversy last year as she successfully pushed NRA-authored Florida legislation that prohibited pediatricians from asking their patients about guns kept in their homes. The bill muzzled the ability of doctors to ask children and their parents about gun safety issues such as proper storage and other issues related to children's access to guns. Hammer objected complaining that pediatrician questions about guns constituted “privacy intrusions.” The original version of the bill "fined physicians up to $5 million and sentenced them to up to five years in prison" before the Florida legislature made amendments.

Other controversial actions by Hammer have been documented by MeetTheNRA.org, a website maintained by the Educational Fund To Stop Gun Violence. Hammer has pushed to allow guns on university campuses and keep them from being banned in hospitals and nursing homes. In 1996, Hammer joked in a New York Times profile that a possible solution to ending the gun debate was to "get rid of all liberals."

In 1988, Hammer distributed a newsletter to members of the Unified Sportsmen of Florida--an NRA affiliate organization--accusing state legislators who favored closing loopholes in a concealed carry law of supporting “a modern-day Gestapo movement.” One of the loopholes the legislation sought to correct allowed violent individuals to possess firearms pending a criminal judgment. Republican State Senator John Grant called for Hammer's resignation and said, “I think Marion Hammer has lost any effectiveness that she might have or any credibility she might have with legislators on both sides of the issue.” Republican State Senator Malcolm Beard added, “I never have been for gun control. But this letter from a lobbyist is filled with half-truths.” The Republican Chairman of the Senate Judiciary Criminal Committee, Bob Johnson, said Hammer possessed, “the lowest standard of integrity I have ever seen for a lobbyist in Tallahassee.”