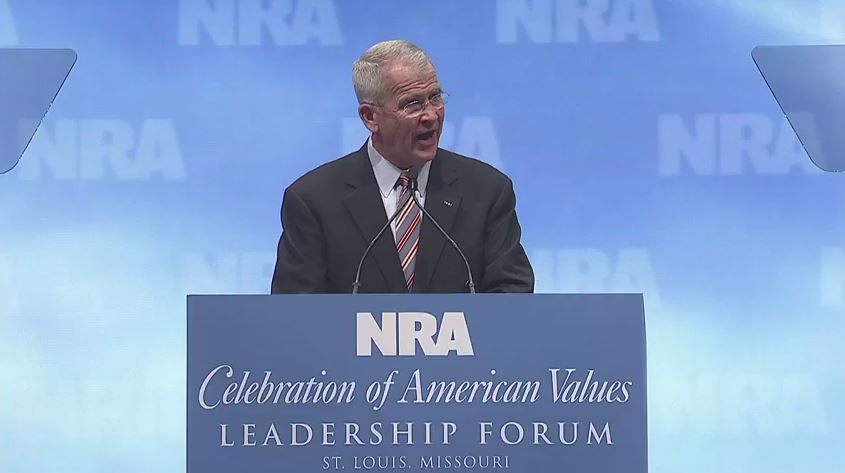 Oliver North, a central figure in the 1980s Iran-Contra arms dealing scandal, will become the NRA’s president during the next few weeks, according to a report from CNN’s Dana Bash:

NRA just announced: Lt. Colonel Oliver North, USMC (Ret.) will become President of the National Rifle Association of America within a few weeks, a process the NRA Board of Directors initiated this morning.

North’s ascendancy to the presidency is a deviation from the group’s standard succession for the position. In recent years, NRA presidents have served two-year terms. Current president Pete Brownell, a gun, ammo, and accessory retailer, was elected in 2017, meaning that he will leave his term a year early.

A statement released by the NRA confirming North will become president noted that “to devote his full time and energy to his family business,” Brownell would not seek re-election. The statement did not explain why Brownell is leaving before his term expires.

It is also unclear whether the change in succession will change the role of the president; NRA CEO Wayne LaPierre has far more control over the organization's direction.

North is a current member of the NRA board of directors, with a term that expires in 2019, and is also the co-host of a show on the NRA’s media operation NRATV. He has also been a longtime contributor for Fox News but will leave that position effective immediately, according to the NRA statement.

Along with his involvement in the Iran-Contra arms dealing scandal -- for which his convictions for several felonies were overturned in 1990 -- North has a history of using inflammatory rhetoric and has been enmeshed in other controversies: