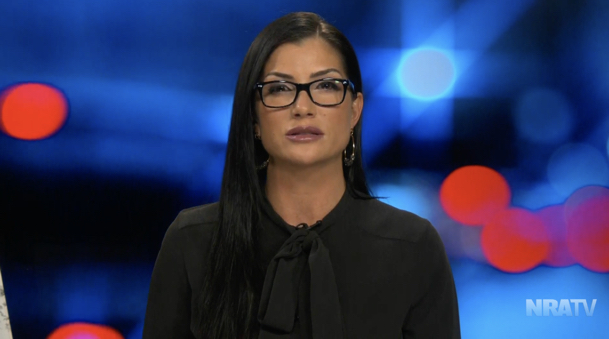 National Rifle Association national spokesperson Dana Loesch smeared Philando Castile by telling a false account of Castile’s actions leading up to a police officer shooting him in order to make Castile seem responsible for his own death.

Loesch discussed Castile during the September 11 broadcast of her radio show while defending herself over criticism of comments she made about Botham Jean, a Dallas, TX, man who was killed in his own apartment by a police officer who claims she mistakenly entered it thinking it was her own.

During the September 10 edition of her NRATV program Relentless, Loesch suggested that Jean would still be alive if “he was a law abiding gun owner,” claiming that he could have used a firearm to defend himself, sparking widespread outrage and incredulity. The NRA, including NRATV, frequently speculate about what victims of shootings could have done to avoid being shot -- often suggesting they should have been armed themselves -- in effect shifting partial blame for the shooting onto the victims themselves.

Additionally, given the NRA’s feckless response to the Castile shooting, it seems unlikely that the gun group would have championed Jean had he defended himself with a gun.

Castile was fatally shot in 2016 during a traffic stop by St. Anthony Police Department officer Jeronimo Yanez after he informed Yanez he had a gun. Castile had a permit to carry a concealed weapon. His girlfriend, Diamond Reynolds, captured the aftermath of the shooting on video and the entire incident was also recorded by a dashcam in a squad car parked behind Castile’s car.

Loesch proceeded to make false claims about what the video showed, which are contradicted by the videos of the shooting, a second-by-second account of the shooting published by the Star Tribune, and forensic evidence presented at Yanez’s trial.

Loesch said, “Castile didn’t say that he had a concealed carry permit, he just said he had a gun,” which, according to Loesch, is what “you’re supposed to [do] when you’re pulled over.” This comment is misleading at best. Under Minnesota law, Castile had no obligation to inform the officer he had a gun or a concealed carry permit. But Castile had told the police officer, “Sir, I have to tell you that I do have a firearm on me,” which suggests he was trying to proactively inform the officer.

Loesch then told a story about how she had no issues when she was pulled over for a traffic violation and she had a gun in the car. Loesch said, “I told [the officer] immediately. What I didn’t do was say, ‘I have a gun’ and then keep reaching for my waistband 10 times after he told me not to. And that’s what happened in the video.”

Loesch is lying about what the video of the shooting showed. The dashcam video that actually captured the shooting doesn’t show Castile reaching for his waistband 10 times, because it “does not show Yanez's point of view or the inside of Castile's car.” Reynolds’ video does show the inside of the car, but it only started after Castile was shot. The dashcam video does, however, have audio of the incident. Three seconds after Castile informed the officer he had a firearm, according to the Star Tribune account, the officer said, “Okay, don't reach for it, then ... don't pull it out,” to which Castile responded, “I’m not pulling it out.”

Five seconds later he was shot multiple times. Just 38 seconds elapsed between when Yanez and Castile started talking and Yanez shooting Castile. Forensic evidence presented at Yanez’s manslaughter trial backed Reynolds’ account that Castile was trying to unbuckle his seatbelt in order to access his wallet when he was shot.

Loesch doubled down on her false characterization moments later, saying, “If I would have just told the cop that I had a gun and I was grabbing my waistband 10 times, I would have gotten shot too.” She also made other excuses for the shooting, saying Yanez was “nervous” because he was “new,” and was “stressed out” and saying, “It didn’t help after [when] it came out that he had pot in the car and all of this stuff.”