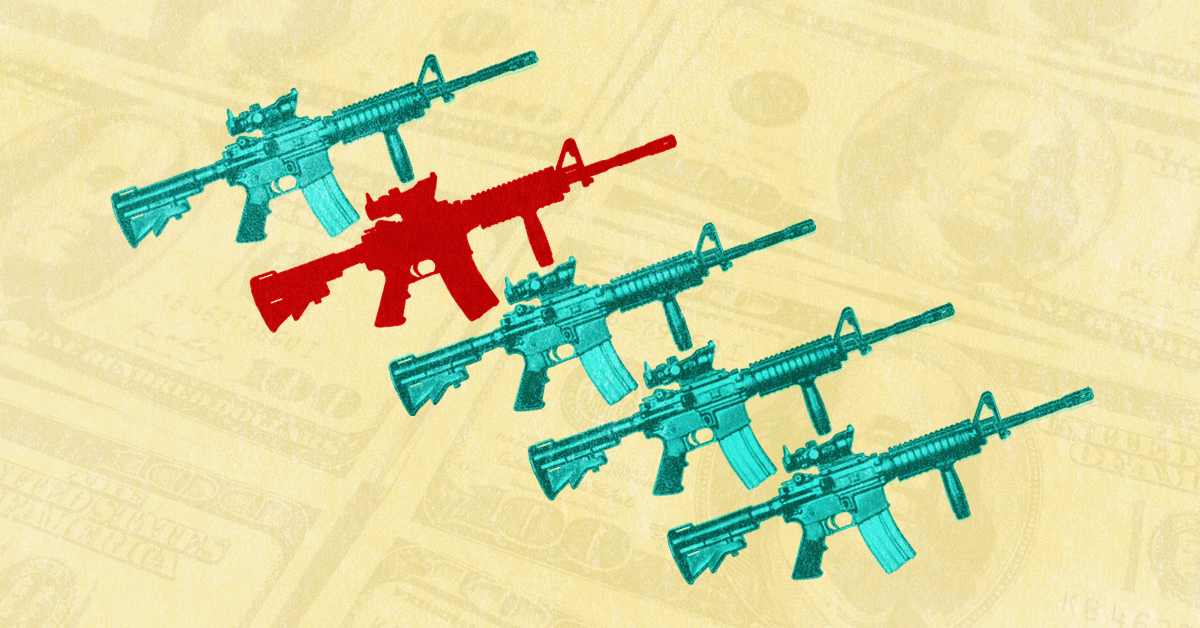 In the wake of yet another massacre carried out with an AR-15 assault weapon, here are eight ridiculous defenses of the murder machine from the National Rifle Association (NRA), a major recipient of donations from assault weapons makers:

Discussing Sen. Dianne Feinstein’s (D-CA) bill to ban assault weapons following the 2012 Sandy Hook Elementary school massacre, past NRA president and current NRA board member Marion Hammer said, “Banning people and things because of the way they look went out a long time ago. But here they are again: the color of a gun, the way it looks. It's just bad politics.”

2. The NRA put on demonstrations of the AR-15 that downplayed the weapon’s capabilities by highlighting how it makes smaller bullet holes than some other guns​

In 2013, the NRA held two AR-15 demonstrations at the shooting range it has at its national headquarters, one for Fox News show Hannity and the other for its own media outlet, then called NRA News. Each demonstration dishonestly highlighted the small bullet hole the weapon makes compared to some other guns in order to to downplay the weapon’s lethality. In fact, the AR-15 inflicts grievous harm on human bodies, even in comparison to other commonly owned firearms.

Months after the Sandy Hook Elementary School shooting in 2012, NRA board member Ted Nugent cited a conspiracy theory surrounding the tragedy to claim that “no so-called assault weapon was used in the grisly murders of the children and teachers in Newton,” but that instead “NBC has reported the butcher used four handguns.” The day after the shooting NBC had reported that only handguns were recovered at the site, but corrected its reporting the same day. The weapon used in the attack was an AR-15 manufactured by NRA donor Bushmaster.

4. Blaming AR-15 manufacturer Bushmaster for Sandy Hook is like “blaming Kleenex for the flu​"

Then-NRA News commentator Natalie Foster made the claim in a 2014 video released by the NRA:

5. If the Founding Fathers had foreseen the invention of the AR-15, they would have “fortified” the Second Amendment “in stone”

Days after a gunman used an AR-15 to massacre churchgoers in Sutherland Springs, TX, (and weeks after a gunman used assault weapons to carry out a massacre in Las Vegas), the NRA released a video that encouraged people to buy more AR-15 weapons. NRATV commentator Dom Raso said in the video, “I guarantee if the Founding Fathers had known this gun would have been invented, they wouldn't have rewritten the Second Amendment -- they would've fortified it in stone. Because they knew the only way for us to stay free was by having whatever guns the bad guys have.”

6. The AR-15 is “easy to learn, and easy to use. It’s accurate, it’s reliable” and more people should buy it as protection from terrorists

The NRA released another video days after the Pulse nightclub shooting also narrated by Raso. The video made a number of arguments praising the abilities of the AR-15: “It’s easy to learn, and easy to use. It’s accurate, it’s reliable." All these characteristics also inadvertently explained how the Pulse gunman was able to kill and wound so many people in a short period of time:

7. The AR-15 as a good defense against the government

On June 15, 2017, one day after Rep. Steve. Scalise (R-LA) was shot and others were wounded in a mass shooting, then-NRATV commentator Bill Whittle said, “I personally think it is a mistake for people to say [the AR-15] is used for hunting, or it's used for target shooting. I have my AR-15 to kill people.” Whittle added, “I am not worried about a deer breaking into my house at 4 o’clock in the morning and coming through the window and maybe murdering me or raping my wife, or anything. I am not worried so much about a coalition of deer marching people into extermination camps.”

He also added, “My weapons are here to defend me against my government.”

(Whittle left NRATV in September 2017. He was recently uninvited to be the keynote speaker at a fundraiser for an Illinois GOP gubernatorial candidate after his history of making racist comments was raised.)

During a discussion of assault weapons days after the Pulse massacre, Dana Loesch appeared on Fox News to claim proposals to regulate the AR-15 were “about disarming women” and were a “war on women.” Earlier that day the NRA had announced Loesch had been hired to be the group’s “Special Adviser on Women’s Policy.” She is now the NRA’s national spokesperson.