On April 10, abortion clinic director Calla Hales tweeted about a North Carolina anti-abortion bill. Calla Hales, the director of A Preferred Women’s Health Center -- which has two abortion clinics in North Carolina and two in Georgia -- tweeted about a bill moving through the North Carolina legislature that would make it a felony for providers not to provide care for infants supposedly “born alive” after an abortion. Just like the currently proposed federal version of this bill, the concept of abortions being performed “after birth” is not based in any medical practice or standard of care, and such procedures are already outlawed under existing homicide codes. As Hales explained on Twitter, “the wording” of the North Carolina bill “makes it seem like this is a common outcome, when it’s truly a false narrative about abortions performed later in pregnancy.” Instead, she said, “The NC version of this bill, SB 359, is worded in such a way that it clearly seeks to vilify abortion providers and aims to criminalize them.” Hales went on to explain how the bill could be exploited by anti-choice politicians if enacted and how it would compound the damage done by existing anti-choice laws in North Carolina. [Twitter, 4/10/19, 4/10/19, 4/10/19; A Preferred Women’s Health Center, accessed 4/15/19; WRAL, 4/10/19; Media Matters, 3/5/19]

Expanding on her Twitter thread, Hales wrote an op-ed for Rewire.News drawing attention to the North Carolina bill. On April 12, Hales wrote about the implications of the North Carolina bill for Rewire.News, saying, “While it should be apparent, it is still necessary to point out that any intentional action to end the life of an infant is already illegal. This is covered by federal and state infanticide laws.” Instead, Hales continued, these so-called “born alive” bills are “entirely based on propaganda. It is highly unlikely for an abortion to result in a live birth.” Hales also pointed out “the clear hypocrisy of these bills,” which “emphasize that any ‘live’ birth must be subject to lifesaving measures. This entirely disregards the input of both the physician and the parents involved in any birth situation.” Hales wrote that such legislation “would revoke the option for a parent to sign a ‘Do Not Resuscitate’ order to limit their infant’s distress, specifically in cases of possible debilitating fetal defects.” Hales concluded, “To put it bluntly: These bills are blatant attempts for legislators to control how and when physicians provide care.” [Rewire.News, 4/12/19]

National Review’s Alexandra DeSanctis selectively engaged with Hales’ thread about the bill, choosing to take a comment out of context to advance an anti-abortion narrative

On April 11, National Review’s Alexandra DeSanctis shared one of Hales’ tweets to make false claims about Hales’ positions. Alexandra DeSanctis, a staff writer at National Review, quote tweeted one of Hales’ tweets about the North Carolina bill -- and put an inaccurate spin on Hales’ words for her followers. Hales’ tweet highlighted some of the potentially unconsidered legal implications of the bill. For example, as Hales explained, while the bill states a “born alive” infant “is a legal person for all purposes,” that definition appeared to be in conflict with Hales’ “understanding that an infant younger than 30 days cannot be added to a will in NC.” DeSanctis shared only this part of Hales’ thread, adding an inaccurate frame: “Oh, here’s a @NARALNC board member opposing a born-alive bill in North Carolina and claiming that an infant can’t be a legal person because you can’t add them to a will until they’re 30 days old.” [Twitter, 4/10/19, 4/11/19]

Following DeSanctis’ inaccurate characterization of her tweet, Hales had to lock her account because of harassment she was receiving. After DeSanctis’ tweet, Hales wrote on Twitter that she was temporarily locking her account due to outrage and harassment sparked by DeSanctis. DeSanctis responded by tweeting screenshots of Hales’ comments and an image of her then-locked Twitter page. In her op-ed for Rewire.News, Hales further explained her decision to lock her account, writing:

Yesterday morning, I tweeted that there are inheritance laws that put limits on how old a newborn must be to inherit, pointing out another potential inconsistency to the idea of a newborn having full legal rights. By the afternoon, I had to lock my account to private in order to avoid the threats and harassment I was getting after a conservative journalist wrongfully claimed that I’d suggested babies younger than 30 days old were not legal persons. [Twitter, 4/11/19, 4/11/19; Rewire.News, 4/12/19]

After DeSanctis’ selectively quoted and falsely framed her tweet, Hales suffered harassment across social media platforms and in a number of right-wing outlets: 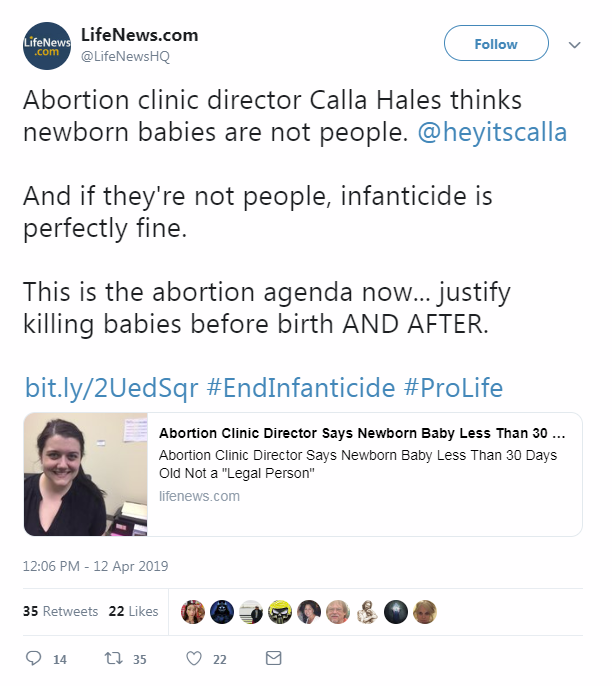 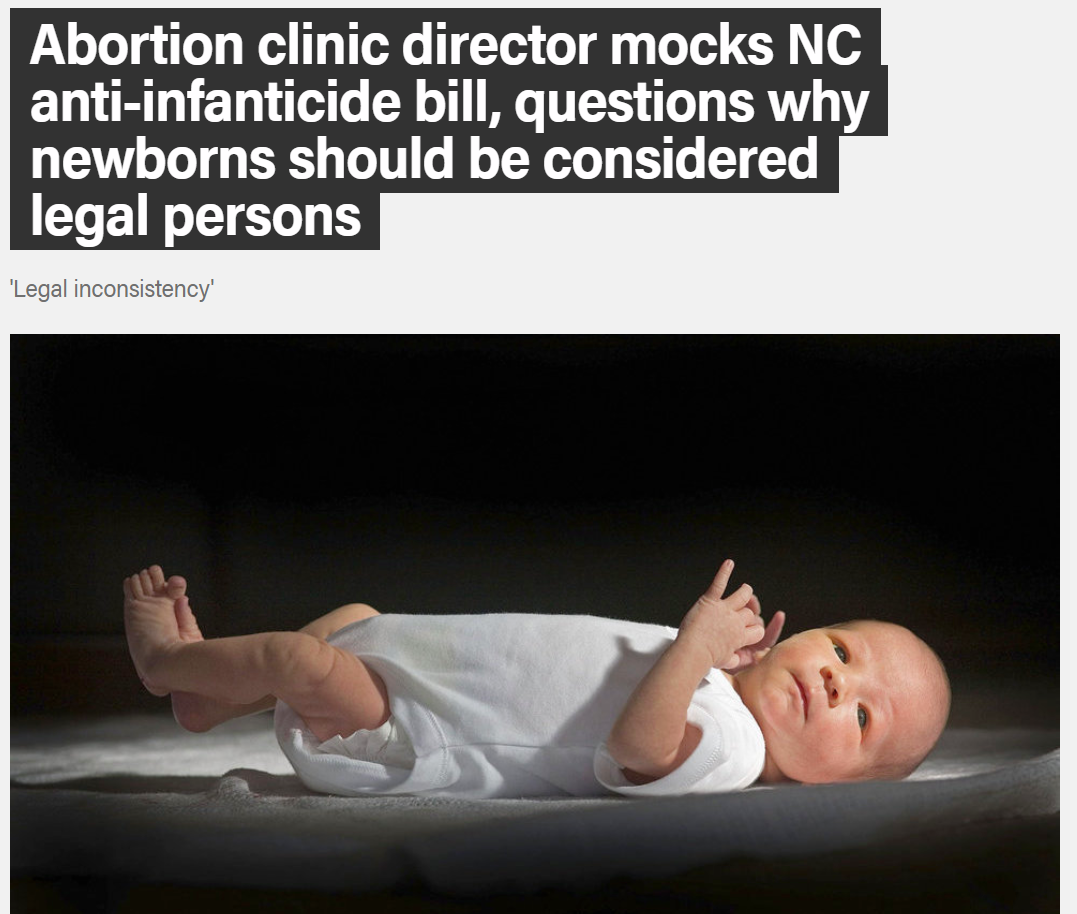 This isn’t the first time Hales has experienced harassment from right-wing media and anti-choice extremists. In June 2017, Hales told Cosmopolitan that a date raped her after she told him that she worked at an abortion clinic. In the following weeks, the protesters outside a Raleigh, NC, clinic -- where she worked at the time -- began yelling personal details about Hales and “echoing words said to her during the assault.” Hales started feeling “increasingly fearful, paranoid, and alone,” so she relocated to work at the Charlotte, NC, clinic. Hales said she didn’t press charges because, in part, she feared “retribution on my parents, my friends, my business, and my staff.” Following the release of the Cosmopolitan article, Hales again faced targeted harassment not just from protesters outside the clinic, but from anti-abortion and right-wing media outlets as well. Pregnancy Help News, LifeNews.com, The Federalist, and Fox News’ website all ran articles attacking Hales, accusing her of letting a rapist walk free to “trash pro-life people.” In Rewire.News’ documentary Care In Chaos, Hales further detailed the particularly vitriolic harassment she faced at the Charlotte clinic, as well as the lack of response she received from the local police. [Cosmopolitan, 6/26/17; Bustle, 6/5/17; Pregnancy Help News, 6/28/17; LifeNews.com, 6/29/17; The Federalist, 7/3/17; Fox News, 7/3/17; Rewire.News, 7/11/17]

In 2018, abortion provider Leah Torres had to relocate following a right-wing and anti-abortion media harassment campaign. Following a tweet that was similarly misinterpreted by right-wing media, abortion provider Dr. Leah Torres faced a harassment campaign online and from right-wing media in 2018. The “massive campaign of mob harassment,” including “death threats against her,” resulted in Torres having “to leave Utah to find work” elsewhere. [The Deseret News, 3/14/19]

Attacks on abortion clinics and providers have led to 11 deaths since 1993. Right-wing media still regularly echoed extreme anti-abortion rhetoric. In 1993, anti-abortion extremist Michael Griffin assassinated Dr. David Gunn outside his clinic in the first known murder of an abortion doctor in the United States. Since then, anti-abortion sentiment has contributed to at least 10 other deaths, numerous injuries to providers and patients, and threats against their families. In 2009, anti-abortion extremist Scott Roeder murdered abortion provider Dr. George Tiller while Tiller was attending church. Before Tiller's assassination -- and prior to Bill O’Reilly’s ouster from Fox News due to numerous sexual harassment allegations -- O’Reilly openly bullied Tiller on his program. According to Rolling Stone, “O’Reilly had waged an unflagging war against Tiller that did just about everything short of urging his followers to murder him.” In 2015, Robert Dear opened fire in a Colorado Springs Planned Parenthood clinic, killing three and injuring at least nine more. After the attack, Dear reportedly said the phrase “no more baby parts” as an explanation, likely referring to an oft-repeated right-wing media talking point based on deceptive videos from the anti-abortion group Center for Medical Progress. The New Republic reported on the admitted shooter’s penchant for right-wing media such as Fox News and Infowars, saying it shaped his paranoid and conspiratorial views about abortion and Planned Parenthood and may have influenced his actions. [The New York Times, 11/29/15; Media Matters, 12/2/15; Rolling Stone, 4/19/17; The New Republic, 12/15/16]

Abortion clinics and providers have faced increasing threats in recent years, including trespassing, death threats, and targeted hate mail. In a 2018 report on harassment of abortion providers during the previous year, the National Abortion Federation found that “trespassing more than tripled, death threats/threats of harm nearly doubled, and incidents of obstruction rose from 580 in 2016 to more than 1,700 in 2017.” There was also a continued “increase in targeted hate mail/harassing phone calls, and clinic invasions” in 2017, as well as “the first attempted bombing in many years.” In 2018, there were documented incidents of violence or threats against clinics reported in Illinois, New Jersey, Pennsylvania, California, Washington, Massachusetts, Iowa and more. [National Abortion Federation, accessed 4/15/19; Chicago Tribune, 2/7/18; NJ.com, 2/24/18; Pittsburgh Post-Gazette, 3/22/18; KSBW-TV, 9/7/18; Capitol Hill Seattle Blog, 4/18/18; The Salem News, 4/18/18; Iowa City Press-Citizen, 9/24/18]

2019 has seen a dangerous escalation of incendiary anti-abortion rhetoric after numerous right-wing media outlets claimed that Democrats are promoting “abortion up to birth” or “infanticide.” After Virginia and New York attempted to protect abortion access later in pregnancy, right-wing media and conservative lawmakers responded by inaccurately claiming that Democrats were pushing for abortion to be legal “up to birth” or even after. Despite those claims having no basis in the reality of either medical care or abortion procedures, it has become a central tenet of Republicans’ and President Donald Trump’s messaging strategy for the 2020 campaign. Here are some of the incidents of anti-abortion violence and harassment already reported in 2019: