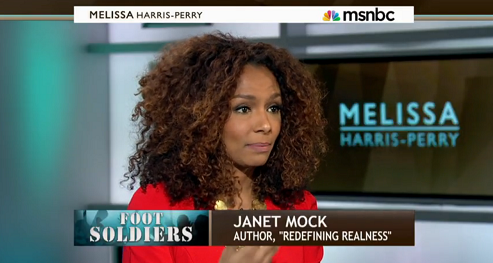 In a refreshing contrast to the problematic and often transphobic coverage provided by other media outlets, MSNBC host Melissa Harris-Perry used her eponymous show to allow a transgender woman to tell her own story in a segment that highlighted the importance of letting transgender people speak for themselves.

The February 1 edition of Melissa Harris-Perry featured an interview with transgender author and activist Janet Mock, whose new memoir Redefining Realness tells the story of Mock's experiences as a trans woman of color. Harris-Perry opened the segment by noting the challenges confronting the transgender community, including disproportionate levels of violence and harassment and employment discrimination.

In her interview, Mock told Harris-Perry that she wrote her memoir to empower other trans women by “bringing words to explain my experiences” and showing that trans people “exist in the daytime and live a very full life”:

MOCK: I think for me [I wrote a memoir] because not enough of our stories are being told. And I think that bringing words to explain my experiences - and not only explain my personal experiences, but also, like, the political context was really important to me, but I knew that young girls needed a personal story that reflected them. And I think that a lot of women will see - a lot of marginalized women, at least - will see themselves in the experiences that I described in the story.

The segment differed sharply from other news outlets' coverage of transgender issues. In January, an article on the sports website Grantland outing transgender golf club inventor Dr. Essay Anne Vanderbilt was fiercely criticized and sparked questions about the role the author's reporting may have played in prompting Vanderbilt to commit suicide. Transgender experts and advocates said that the story and its tragic ending underscored the need for news organizations to get the input of actual trans people when reporting on issues related to the community.

Cable news outlets Fox News and CNN have all too often disregarded journalistic best practices in covering the transgender community, with both networks repeatedly misgendering transgender subjects like Army Private Chelsea Manning, for instance. Meanwhile, Fox's Martha MacCallum has asserted that transphobic bullying is “not a big problem.” Fox's Keith Ablow says he isn't convinced that there's such a thing as being transgender - an opinion that he didn't apparently hold when he interviewed a real transgender person earlier in his career.

In hosting Mock to discuss her experiences as a trans woman of color, Harris-Perry continues her pattern of breaking with other television hosts by providing viewers with a diverse array of voices. Whereas white male guests dominate other Sunday morning shows, Harris-Perry and fellow MSNBC host Steve Kornacki are the only two hosts to feature a majority of guests other than white cisgender men.