Federal Communications Commission Chairman Ajit Pai will reveal plans to his fellow commissioners on Tuesday to fully dismantle the agency's Obama-era net neutrality regulations, people familiar with the plans said, in a major victory for the telecom industry in the long-running policy debate.

The commission will vote on the proposal in December, some seven months after it laid the groundwork for scuttling the rules that require internet service providers like Comcast or AT&T to treat web traffic equally.

Repeal of net neutrality rules could allow ISPs to charge more or block access to certain websites. According to a New York Times article, internet service providers (ISPs) may be empowered to prioritize their own online services at the expense of their competitors by charging higher fees or controlling access to rival websites or services. Pai’s plan would also reverse the decision to treat internet access as a public utility. [The New York Times, 11/21/17]

After initial news broke about the planned repeal, networks -- with the exception of MSNBC -- devoted scant coverage to the story. A Media Matters study found that in the eight days after Pai’s proposal was made public, the broadcast networks’ morning news programs, nightly newscasts, and Sunday political talk shows covered net neutrality for a combined five minutes. CNN devoted less than 10 minutes to net neutrality, Fox News covered it for just over 11 minutes, and MSNBC led the pack with nearly 47 minutes of coverage. [Media Matters, 12/12/17]

Since November 28, cable and network news have given net neutrality just 27 minutes of additional coverage. In the last two weeks, CNN has aired just two short reports about net neutrality, totaling a little over four minutes, which included a single question posed to Sen. Ben Cardin (D-MD). NBC aired its first stories on net neutrality that ran for a combined eight minutes. CBS ran one segment and one news brief that together totaled a little more than two minutes in length. MSNBC and Fox News each aired an interview with Pai for eight minutes and four minutes, respectively. By contrast, in the eight days after Politico broke the story about the FCC vote, cable and broadcast news spent almost one hour and 13 minutes on the topic. (But the majority of that coverage came on one network, MSNBC.)

MSNBC ran a December 13 segment on net neutrality, which fell out of the parameters of the study. [Media Matters, 12/13/17] 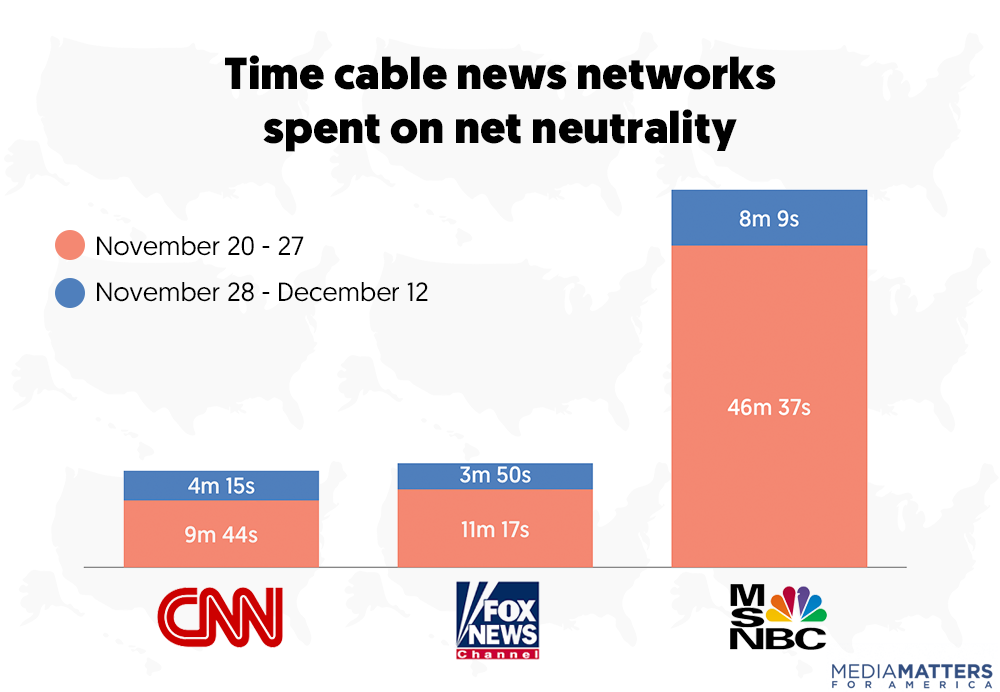 ABC has aired no additional coverage since its report on November 21. Since ABC aired one story on net neutrality in the wake of breaking news about the upcoming FCC vote, the network hasn’t aired any more stories on the topic. 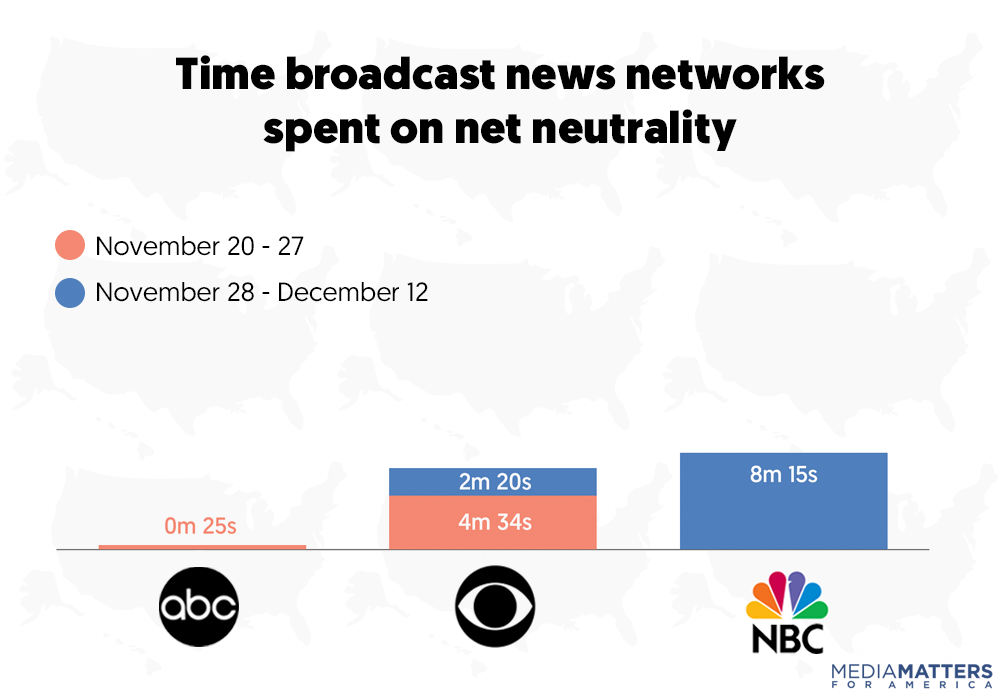 Overall, cable and network news have spent just one hour and 39 minutes on net neutrality. MSNBC devoted the most time to net neutrality over the last three weeks, with almost 55 minutes of coverage. AM Joy, hosted by Joy Reid, had the largest share of that coverage -- approximately 13 minutes. Fox News and CNN followed far behind with 15 minutes and 14 minutes, respectively. The bulk of Fox News’ coverage was friendly interviews with Pai. NBC, CBS, and ABC gave net neutrality eight minutes, almost seven minutes, and 25 seconds, respectively.

Pai has given interviews only to conservative-friendly media. Since November 21, cable news has interviewed Pai just four times about this Thursday’s vote. Two interviews were on Fox News’ Fox & Friends, and a third aired on the network’s Tucker Carlson Tonight on December 11. The fourth interview was on MSNBC’s Hugh Hewitt, hosted by conservative radio talk show host Hugh Hewitt, on December 2. Pai has not given an interview to any of the broadcast networks during the period studied. [Media Matters, 11/22/17]

NBC and MSNBC are owned by internet service provider Comcast, which stands to benefit from the repeal. MSNBC repeatedly mentioned in its coverage that it is owned by Comcast, and NBC described Comcast as “NBC parent company” in both its reports. A merger between Time Warner -- which currently owns CNN -- and internet service provider AT&T is currently pending review, which was covered during a November 26 Reliable Sources segment on the channel.

Media Matters searched the Snapstream database of television video transcripts for any mentions of “net neutrality,” “Federal Communications Commission,” or “FCC” from November 20 to December 12, 2017 on ABC’s Good Morning America, World News Tonight with David Muir, and This Week with George Stephanopoulos; CBS’s This Morning, Evening News, and Face the Nation with John Dickerson; NBC’s Today, Nightly News with Lester Holt, and Meet the Press with Chuck Todd; and all-day programming on the three major cable news networks -- CNN, Fox News Channel, and MSNBC. We also searched the Nexis transcript database and the iQ Media transcript database for the same terms. Since November 23 was Thanksgiving, some networks altered their regularly scheduled programming on that day.